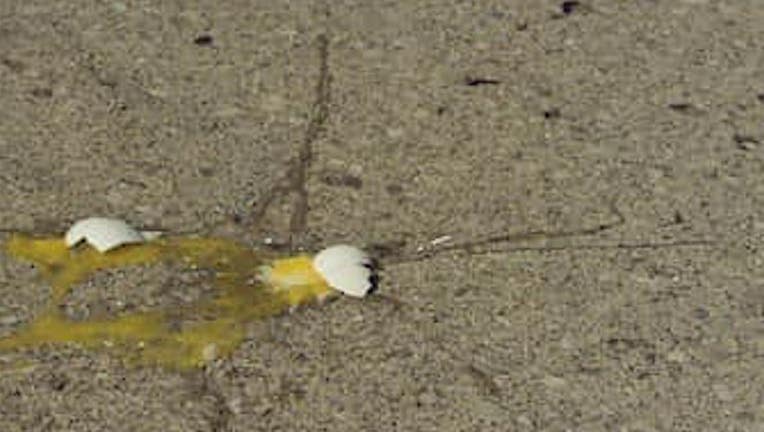 A broken egg possibly tied to a series of attacks going back two years in Chicago. A neighborhood Facebook group tried to solve the case. | Provided

CHICAGO - Melissa Benge was standing on a sidewalk waiting for a table at a Lake View restaurant in late July when someone in a white truck threw an egg at her.

"All of the sudden out of the corner of my eye I see something flying," Benge told the Sun-Times. "The second it happened I turned and looked up and saw a big white box truck with red graffiti."

She wondered if she had been targeted for some reason while she waited with a group of friends outside a restaurant near Sheridan Avenue and Broadway around noon July 24.

But she later learned dozens of people across the North Side had the same story about eggs tossed at them from a white van.

Like Stephanie Neuerburg, who said the same thing happened as she was walking in the Ravenswood area one June afternoon. "I shrieked, I grabbed my face, I thought something much worse than egg had hit me," she said.

A Facebook group called Chicago Egg Hunters claims over 500 members, some of them with stories of egg attacks as far back as February.

The group was founded by Moshe Tamssot who says it was able to track down the truck and, he hopes, provide an example of how a community can fight back.

"Understand there are other people on the other end who are watching," he said.

"I’m like, where are these eggs coming from?" he said. 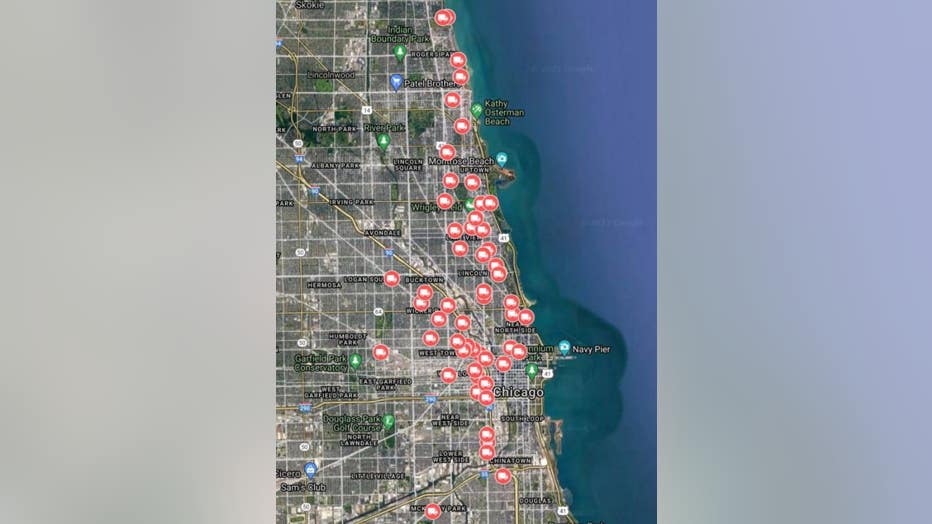 He reached out to other virtual neighborhood groups, collecting information on dozens of such attacks tied to a delivery truck going back two years.

"Someone suggested it’s like performance art," Tamssot said. "We’re just demonstrating that we’re doing this better than the police."

Soon he had a photo of the truck’s license plate and tracked the truck to the Southwest Side. He recruited volunteers who scouted the area and found the truck parked in a business lot.

On Monday, he was on the phone with the store’s manager, who he said promised him to speak to his delivery truck drivers and discipline them.

The store manager told the Sun-Times the truck belongs to his company but has been parked, unused, in the store’s lot for the past month.

The manager said he hires many short-term employees to make deliveries and has no way to prove who may have thrown eggs.

The manager — who the Sun-Times isn’t naming because neither he nor his employees have been charged — said he hasn’t been contacted by police but would cooperate.

A Chicago police spokesman on Tuesday said the department was aware of several of the incidents, and that no serious injuries were reported. The department declined to say how many attacks were tied to the white box truck.

Those who’ve been hit, like Benge, understand eggs are fairly harmless as a weapon, but worried the attacker or attackers may start throwing more dangerous objects.

Tamssot said he ventured into this amateur sleuthing because he believes in community policing but is discouraged by the neighborhood CAPS meetings held by the department.

He said he’s spoken with 12th District police on the Near West Side, who’ve invited his members to the CAPS meetings.

"And I’m like, you don’t have a meeting room big enough for all of us," Tamssot said. "You couldn’t fit all 31,000 West Loopers in your meeting. So why don’t you come to us?

"When we actually had beat cops, it worked great," he said. "But then they disappeared. And then cases like this fell through the cracks."

Tamssot said the egg-thrower case is a perfect example of how the community can come together to stop crime.

"I’m not interested in police action, but just creating an environment where it’s not possible to continue this," he said. "Now is probably a good time to stop because everyone is watching and it’s gotten serious."

"I didn’t want to get anyone in trouble," he continued. "I was hoping they would be following along and giggling to themselves, saying OK we had a good run. We didn’t really hurt people."

Neuerburg said she was impressed with the group’s effort. "It is amazing to me how people came together like this. I feel weirdly vindicated."