There is a call of support for the man who rode a horse down the Dan Ryan on Monday, as some people are demanding charges against the 'Dreadhead Cowboy" be dropped.

CHICAGO - There is a call of support for the man who rode a horse down the Dan Ryan on Monday, as some people are demanding charges against the 'Dreadhead Cowboy" be dropped.

“Yesterday, he was just trying to make his voice heard. He didn’t mean no harm,” said Lateshia Hollingsworth, the sister of the man who rode the horse.

She was among several supporters and activists waiting Tuesday outside Area Two Police Headquarters for his release.

Adam Hollingsworth, 33, has been charged with several misdemeanors after riding his horse “Nunu” seven miles down the southbound lanes of the Dan Ryan Expressway during Monday’s afternoon rush hour to call attention to violence against children in Chicago.

“There’s a lot of kids out here being hurt. Just yesterday a 10-year-old got shot. This is what he’s fighting for, to stop the violence on kids, innocent kids,” Lateshia said. 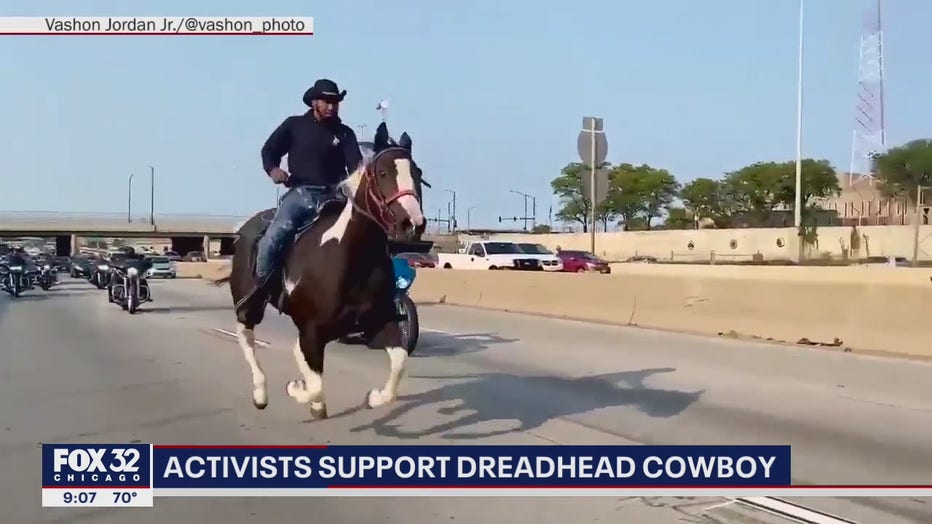 On Tuesday night, Hollingsworth was charged with one felony count of aggravated animal cruelty, according to a statement from Illinois State Police.

The announcement came on top of Hollingsworth being charged with misdemeanor counts of reckless conduct, disobeying a police officer, obstructing traffic and criminal trespass to state supported property, according to state police.

Police say the horse was badly injured during the stunt, bleeding from the hoof and bleeding from a bad saddle sore. It also nearly collapsed when taken to Chicago’s Animal Care and Control.

The director there says “Nunu” is now in the care of a horse rescue organization outside the city.

“Our main goal usually is to make sure the animals get the proper care while waiting for the judge to decide,” said acting ACC Director Mamadou Diakhate.

“He takes very well care of his animals. So I’m a little confused why he still under investigation,” Lateshia said.

Mayor Lori Lightfoot, who used Hollingsworth at a Census promotion in July, said in a statement: “There is a right way and a wrong way to call attention to issues of great importance and this stunt was decidedly the very wrong way.”

But activists outside the police station are demanding state police drop all the charges.

“This is somebody who for a while now has been bringing positivity to urban neighborhoods,” said Ja’Mal Green.

Lateshia says Hollingsworth has several other horses, which he keeps in Indiana. No word on whether the state is checking into their well-being.