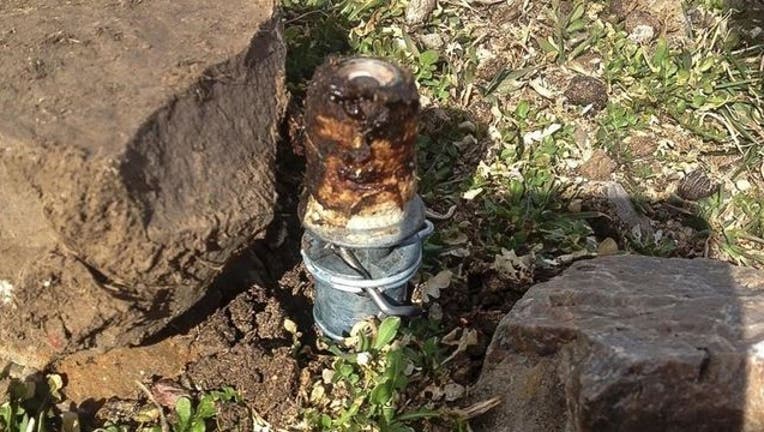 POCATELLO, Idaho (AP) - Federal authorities have confirmed that a cyanide trap intended to kill coyotes in eastern Idaho instead killed a dog in an incident that local law enforcement officials say also injured a 14-year-old boy.

The U.S. Department of Agriculture acknowledged Friday that workers with its Animal and Plant Health Inspection Service's Wildlife Services placed the device called an M-44. The device activated and killed a 3-year-old Lab named Casey on Thursday near Pocatello.

"APHIS' Wildlife Services confirms the unintentional lethal take of a dog in Idaho," the agency said in an emailed statement to The Associated Press. "Wildlife Services has removed M-44s in that immediate area."

It's not clear how many other devices had been set.

Bannock County Sheriff Lorin Nielsen in a statement said the boy's father reported that his son had been covered in an unknown substance and the dog had died.

"Initially, we were just trying to determine what it even was - that was our biggest concern" said Capt. Dan Argyle, who responded to the call at about 1 p.m. Thursday. "We have never dealt with these before."

He said the device was on top of a ridge about 500 yards from the boy's home, which is in a foothills area with other homes outside Pocatello.

"It's a miracle the child wasn't seriously injured or even killed," Argyle said.

M-44s are spring-activated devices typically smeared with bait that shoot poison into an animal's mouth when it tugs on the trap. The federal government uses the devices to control predator populations in an effort to limit losses to livestock operators.

Wildlife advocate groups and some environmental groups condemn the devices, contending that they can kill non-targeted species.

Theresa Mansfield, the boy's mother, said her son was walking their dog on a hillside behind their home when they encountered the device. She said her son was knocked down when it activated, and that he watched as the dog died.

"Seeing something like that stays with you," she told the Idaho State Journal (http://bit.ly/2mCFmGu).

The Pocatello Fire Department and a hazardous material crew also responded to the area.

"Wildlife Services is completing a thorough review of the circumstances of this incident, and will work to review our operating procedures to determine whether improvements can be made to reduce the likelihood of similar occurrences happening in the future," the Agriculture Department said in the statement.