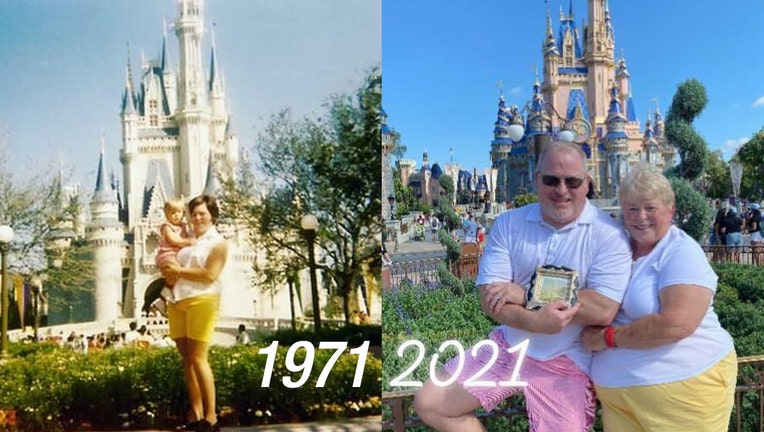 LAKE BUENA VISTA, Fla. - A Florida mother and son who visited Walt Disney World on opening day in 1971 visited the parks again this weekend for its 50th anniversary, taking a photo in the same spot that they did 50 years ago.

Walt Disney World kicked off its 50th anniversary celebration, dubbed ‘The World’s Most Magical Celebration,’ on Friday, October 1st. That is the same day that Disney opened its first Florida park, Magic Kingdom, in 1971.

Prior to the start of the anniversary festivities, FOX 35 spoke to Lake Mary resident Susan Kroll. She said that she was actually at Magic Kingdom on that historic day in 1971. She was living in Buffalo, New York, at the time but she and her husband were visiting family when they decided to head to the park.

Lake Mary resident Susan Kroll was actually at Magic Kingdom on the historic opening day in 1971. She shares what it was like with Good Day Orlando.

"I couldn’t even believe how beautiful it was. Everybody that was there was just fascinated with the whole place," she said in regards to seeing Magic Kingdom for the first time. "Everyone was very excited to be there."

Susan added, "I had been to amusement parks before but nothing like that."

She was visiting Magic Kingdom that day with her family, including her one-year-old son Bill. He told FOX 35 that he was too young to remember the day but Susan said that he was very excited about it all.

They snapped a picture in front of Cinderella Castle. 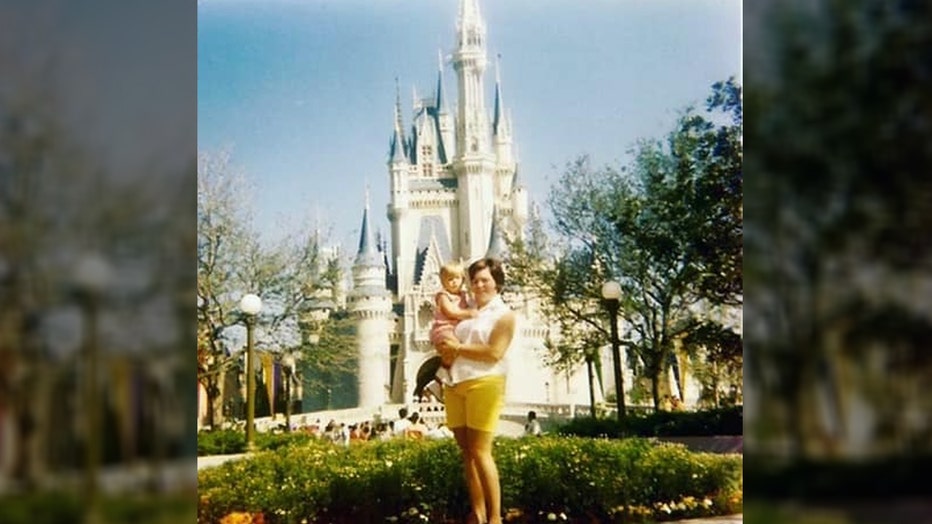 50 years later, Susan and Bill headed to Magic Kingdom again to commemorate the milestone anniversary. They visited the park on Saturday, October 2nd.

"It was very exciting," Susan said. "Everybody was having fun."

She explained that while she visits the parks often — in fact, she’s been to all four grand openings of the Walt Disney World parks — her son has not been in a long time.

"We were very excited. Bill was like a little kid coming up Main Street. He hasn’t been there in a long time. I go a lot but he doesn’t go very often. So, he said ‘I remember this, I remember that,’" she added.

MORE NEWS: 'Electric and magical': Woman describes what Magic Kingdom's opening day in 1971 was like

Bill further explained, "My first impression turning down Main Street was how beautiful the castle looked all painted and ready for the 50th. I’ve been to the parks hundreds of times — as a guest and a seasonal employee as a teenager — but I’ve never stopped being amazed at the genius, creativity, passion, and excellence that Walt started and the employees and leaders have carried on." 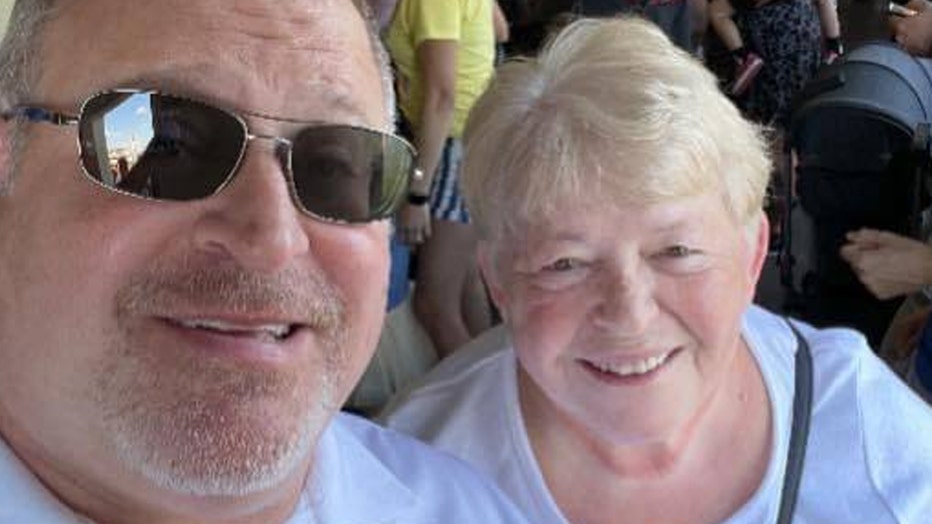 He added, "Even though I live in Orlando, every time I walk in the parks, I feel like I’m in another world — Walt’s world!"

While on Main Street, Bill and Susan walked up to several cast members and showed them their ‘ABCDE’ tickets from the early days of Magic Kingdom, asking ‘Do we need to have this ticket to come in here?’ Susan explained that the cast members were shocked and excited after hearing how Susan and Bill were back after visiting on opening day.

"My mom was on cloud nine each time we did our show and tell," Bill said.

First on their agenda was taking a picture in the same spot that they did in 1971. They headed for Cinderella Castle and got a shot together, holding the original picture from 50 years ago. 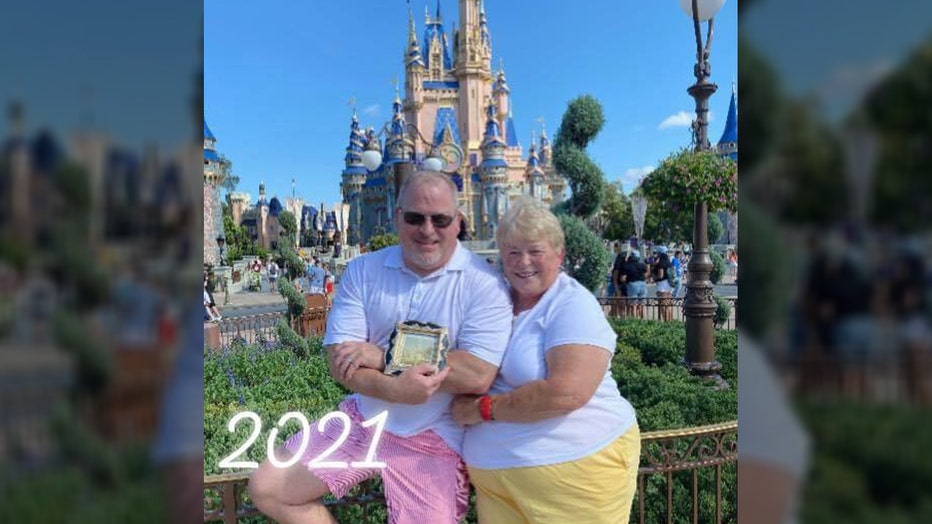 Their next stop was Tomorrowland as Bill used to work there in the 1980s and wanted to revisit the area. They did the ‘Carousel of Progress’ attraction while there, which Susan previously said was one of her favorites because "you can kind of relax in there and cool off."

MORE NEWS: The history of Walt Disney World and its opening 50 years ago

They also got a 50th anniversary popcorn bucket and just people watched. 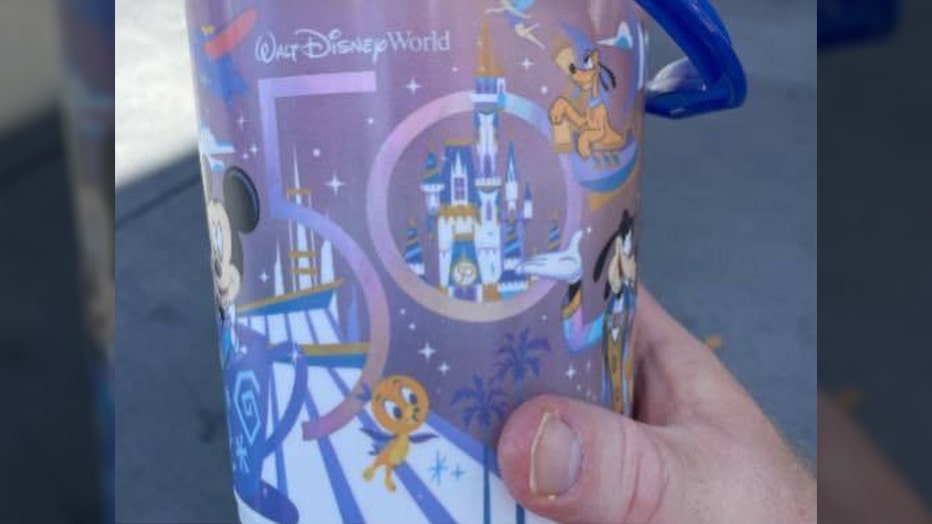 Looking ahead to the future, Susan plans to visit the parks another two times this week: once with her friends and once with her grandchildren. Further past that, she is looking forward to what's next for Walt Disney World Resort. The attraction she said she is most excited about is ‘Guardians of the Galaxy: Cosmic Rewind," debuting at Epcot sometime in 2022.

Disney described the attraction as a "family-friendly ‘storytelling coaster’ that will feature a groundbreaking ride system with vehicles that rotate 360 degrees and can even do a reverse launch." 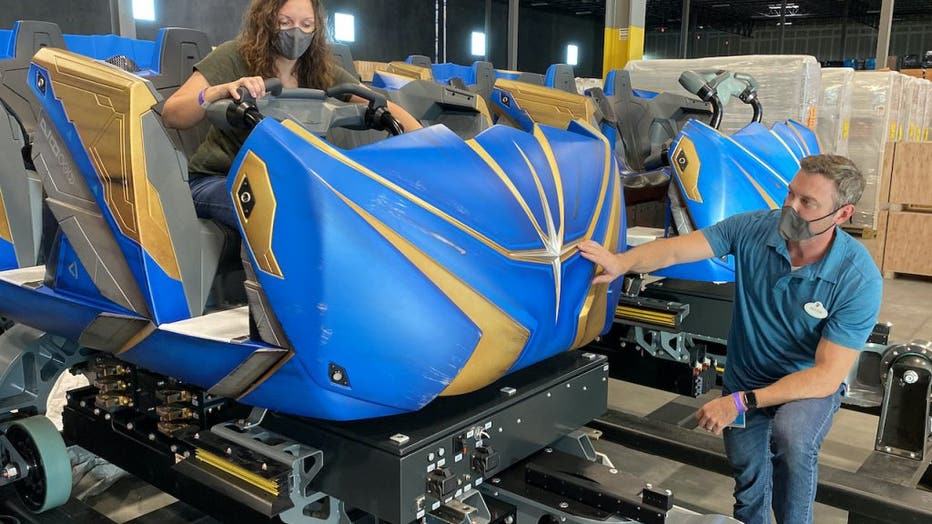 They said that riders begin their adventure in the ‘Galaxarium,’ a planetarium-like exhibition that explores Earth’s galaxy and Xandar, a planet from Marvel’s ‘Guardians of the Galaxy’ films. Then, they will learn about the planet’s treasures but are interrupted when the Guardians of the Galaxy arrive.

In addition, Disney said that each individual cab in the attraction’s OmniCoaster ride system will direct your eyes to the story happening around you. Instead of whizzing by the action, the system will fully immerse you in the story from the minute you take off."

Guardians of the Galaxy: Cosmic Rewind

The Magic Kingdom at Walt Disney World Resort opened on October 1, 1971. We've been looking back at the history of this Central Florida staple and also looking forward. There's a new ride coming to Epcot, Guardians of the Galaxy: Cosmic rewind, and it's getting lots of buzz.

Susan also commented on the upcoming ‘Tron Lightcycle Power Run’ attraction coming to Magic Kingdom. Riders will reportedly board ‘Lightcycles,’ face forward, and embark on a thrilling journey. There is already a version of the attraction at Shanghai Disneyland. 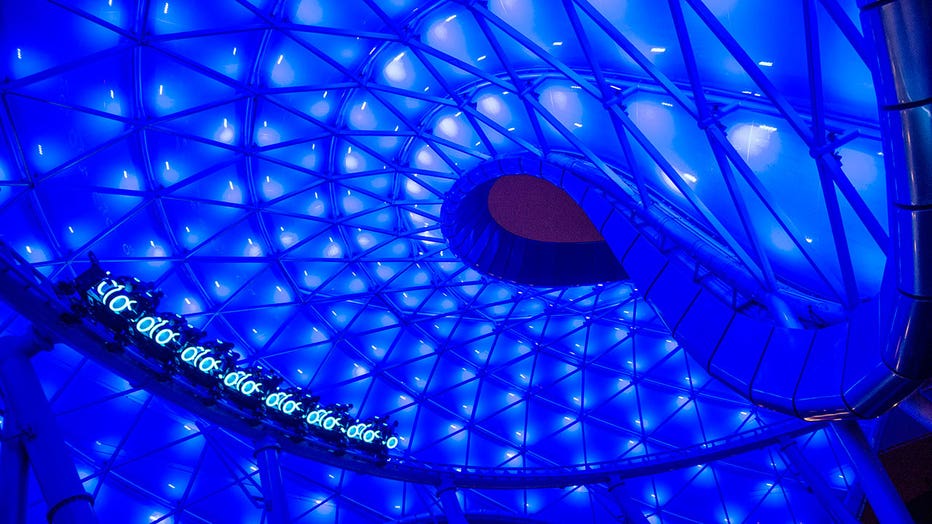 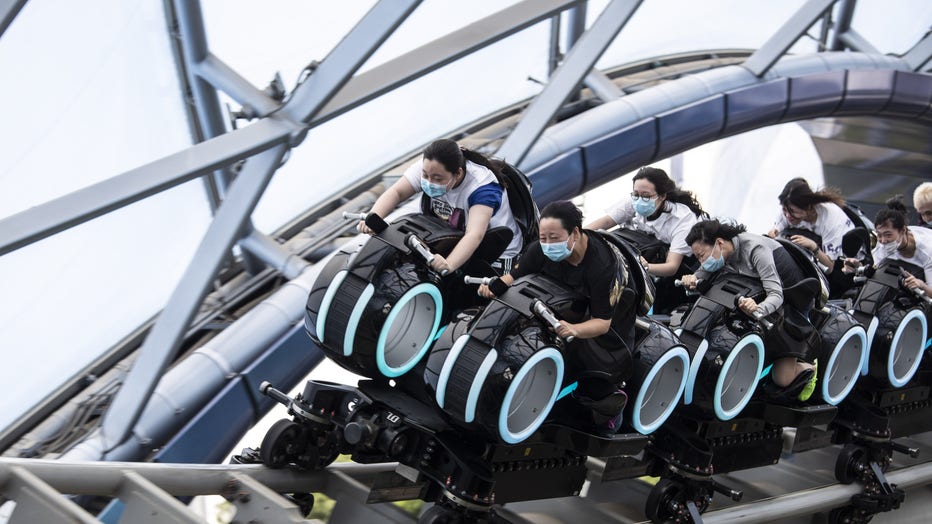 "I’m not big into rollercoasters. I think when you’re young, you like roller coasters. I don’t but I believe in trying everything once," Susan explained when talking about the Tron attraction under construction. While laughing, she added, "If I don’t like it, I don’t ever have to do it again."

No opening date has been announced for Tron Lightcycle Power Run yet but it can already be seen being built inside Tomorrowland, right next to Space Mountain. It is one of many new attractions coming to Walt Disney World Resort in the coming years.

Bill had a comment for the future of Walt Disney World as well, stating, "Despite our challenges today, we are better off than we were in 1971 and progress will continue — just as Walt said on the Carousel of Progress!"

50th anniversary festivities at Walt Disney World Resort will go for 18 months, as new experiences debut across the entire Florida resort. Be sure to check out ‘Disney's 50th anniversary celebration is underway: What to expect’ for more about The World’s Most Magical Celebration.