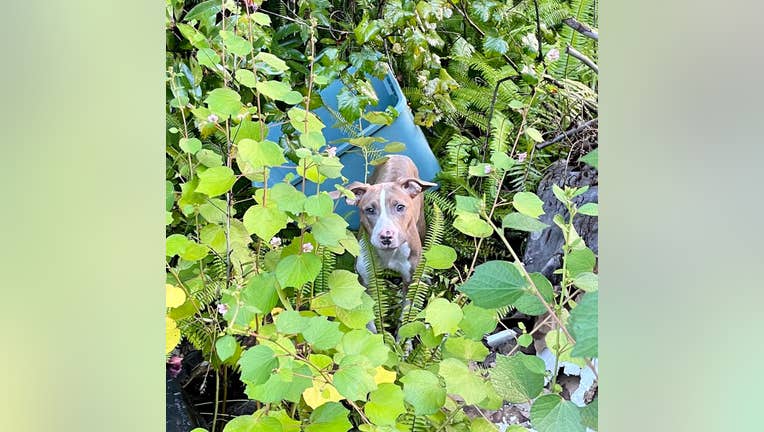 Photo is courtesy of the Orange County Sheriff's Office

ORANGE COUNTY, Fla. - A Florida woman rescued an abandoned dog while she was walking her own dog on Wednesday.

The deputy spent the next 30 minutes climbing through "thick brush, crawling on her hands knees, and scaling a 15-foot wall," according to the Orange County Sheriff's Department.

Photo is courtesy of the Orange County Sheriff's Office

She was able to rescue the dog and turn her over to an Orange County Animal Services officer.

In an update from Orange County Animal Services, they say that someone had tossed a plastic tote over a bridge from a moving vehicle with the dog inside.

"Our officer Sarabeth, along with an Orange County Sheriff's Office, Florida deputy responded. What they found was a young female dog inside a small blue plastic tote that had been thrown away like garbage."

Fortunately, the dog was not hurt. The deputy named the 4-year-old dog Daisy, and she is now being cared for by animal services who are prepping her for adoption.

"We don't know why this happened," the shelter said on Facebook. "The location where Daisy was dumped is a short drive from the shelter. There are literally hundreds of private rescues that would be willing to take in a sweet and gentle dog for foster or adoption. And yet someone chose instead to commit this act of cruelty."