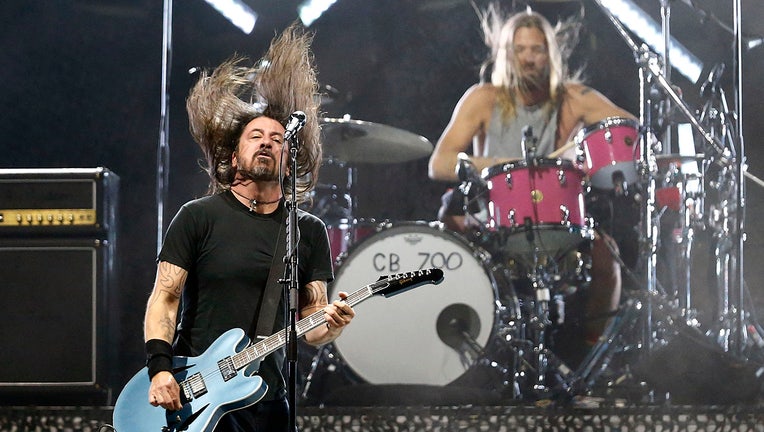 Dave Grohl and Taylor Hawkins of Foo Fighters perform during day one of Lollapalooza Chile 2022 at Parque Bicentenario Cerrillos on March 18, 2022 in Santiago, Chile. (Photo by Marcelo Hernandez/Getty Images)

The rockers had been scheduled to play at the Grammy Awards in Las Vegas on Sunday as well as spring dates at the Beale Street Music Festival; the New Orleans Jazz & Heritage Festival; Columbia, Maryland; Raleigh, North Carolina; Daytona Beach; Charlotte, North Carolina; the Boston Calling Music Festival; and summer dates in Germany, Italy, Spain, Portugal, France and the UK.

"It is with great sadness that Foo Fighters confirm the cancellation of all upcoming tour dates in light of the staggering loss of our brother," the band said in a statement Tuesday.

Hawkins died Friday during a South American tour with the rock band. He was 50.

"We’re sorry for and share in the disappointment that we won’t be seeing one another as planned," the band's statement read. "Instead, let’s take this time to grieve, to heal, to pull our loved ones close, and to appreciate all the music and memories we’ve made together."

Hawkins was Alanis Morissette's touring drummer when he joined Foo Fighters in 1997. He played on the band's biggest albums including "One by One" and "In Your Honor," and on hit singles like "Best of You."

In lead singer David Grohl’s 2021 book "The Storyteller," he called Hawkins his "brother from another mother, my best friend, a man for whom I would take a bullet."