Pentagon officials talked about the plan to get American citizens and allies out of Afghanistan after the Taliban took control.

Former U.S. President George W. Bush, who ordered the 2001 invasion of Afghanistan that drove the Taliban from power, expressed "deep sadness" over the unfolding situation in the country.

In a statement released late Monday, Bush said he and wife Laura Bush "stand ready as Americans to lend our support and assistance in this time of need" following the fall of the Afghan government and the Taliban’s swift return to power.

"Laura and I have been watching the tragic events unfolding in Afghanistan with deep sadness. Our hearts are heavy for both the Afghan people who have suffered so much and for the Americans and NATO allies who have sacrificed so much," the statement said in part.

The war in Afghanistan began under Bush after the Sept. 11, 2001 attacks on the United States. Washington gave Taliban leader Mullah Omar an ultimatum: hand over al-Qaida leader Osama bin Laden and dismantle militant training camps or prepare to be attacked. Omar refused, and a U.S.-led coalition launched an invasion in October. 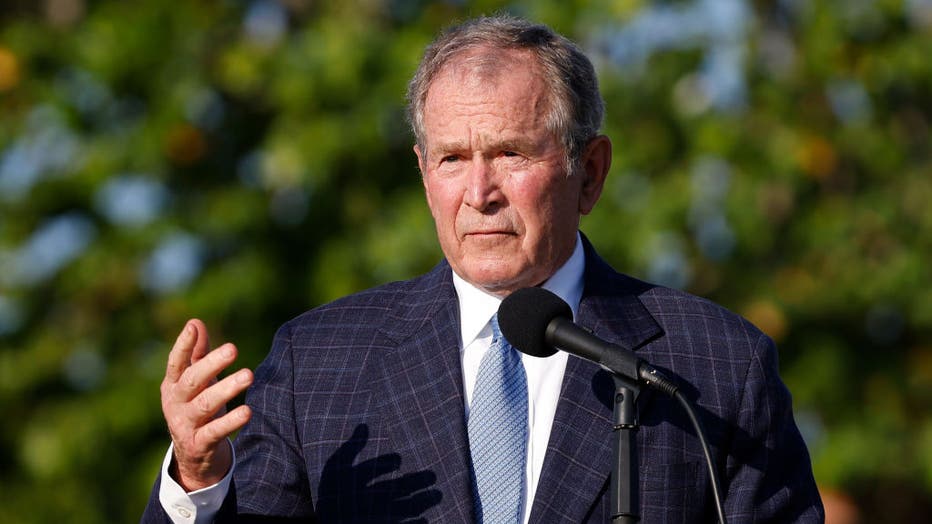 FILE - Former U.S. President George W. Bush speaks during the flag-raising ceremony prior to The Walker Cup at Seminole Golf Club on May 7, 2021, in Juno Beach, Florida. (Photo by Cliff Hawkins/Getty Images)

The initial invasion drove the Taliban from power and scattered al-Qaida. But as the U.S. lost focus on Afghanistan during the Iraq war, the Taliban eventually regrouped. The militants captured much of the Afghan countryside in recent years and then swept into cities as U.S. forces prepared to withdraw ahead of an Aug. 31 deadline.

RELATED: Taliban seizes Afghanistan: What happened and what could come next

Bush last month criticized the Western withdrawal from Afghanistan in an interview with a German broadcaster, saying he fears that Afghan women and girls will "suffer unspeakable harm." In his recent statement, Bush addressed U.S. troops who had served in Afghanistan and "kept America safe from further terror attacks."

"Many of you deal with wounds of war, both visible and invisible. And some of your brothers and sisters in arms made the ultimate sacrifice in the war on terror. Each day, we have been humbled by your commitment and your courage. You took out a brutal enemy and denied Al Qaeda a safe haven while building schools, sending supplies, and providing medical care," the statement continued. "You kept America safe from further terror attacks, provided two decades of security and opportunity for millions, and made America proud. We thank you from the bottom of our hearts and will always honor your contributions."

At the White House, President Joe Biden on Monday rejected blame for chaotic scenes of Afghans clinging to U.S. military planes in Kabul in a desperate bid to flee their home country after the Taliban's easy victory over an Afghan military.

He called the anguish of trapped Afghan civilians "gut-wrenching" and conceded the Taliban had achieved a much faster takeover of the country than his administration had expected. The U.S. rushed in troops to protect its own evacuating diplomats and others at the Kabul airport.

But the president expressed no second thoughts about his decision to stick by the U.S. commitment, formulated during the Trump administration, to end America's longest war, no matter what.

"I stand squarely behind my decision" to finally withdraw U.S. combat forces, Biden said, while acknowledging the Afghan collapse played out far more quickly than the most pessimistic public forecasts of his administration. "This did unfold more quickly than we anticipated," he said.

Biden on Monday also authorized $500 million in aid relief to Afghan refugees. Pentagon spokesman John Kirby said late Monday that the U.S., which had taken charge of air traffic control at the Kabul airport, had resumed airlifts out after suspending them due to the morning's stampedes onto the runways by frightened Afghans.

The U.S. hopes to fly out up to 5,000 people a day once more of 6,000 U.S troops being deployed to secure the evacuation arrive, and once more transport planes can land, he said.

Satellite imagery from August 16 shows the chaotic scenes at Kabul Airport that morning as thousands of people flocked there in a bid to escape after the Afghan capital fell under Taliban control the previous day. (Credit: Maxar Technologies via Storyful)

Biden pledged to work to also evacuate private U.S. citizens and citizens of foreign governments, as well as Afghans who formerly worked with Americans in the country, journalists, prominent women and other Afghans considered most at-risk of Taliban reprisal.

Bush in his statement stressed confidence that "the evacuation efforts will be effective because they are being carried out by the remarkable men and women of the United States Armed Forces, diplomatic corps, and intelligence community."

"President Biden has promised to evacuate these Afghans, along with American citizens and our allies. The United States government has the legal authority to cut the red tape for refugees during urgent humanitarian crises. And we have the responsibility and the resources to secure safe passage for them now, without bureaucratic delay," the statement reads.