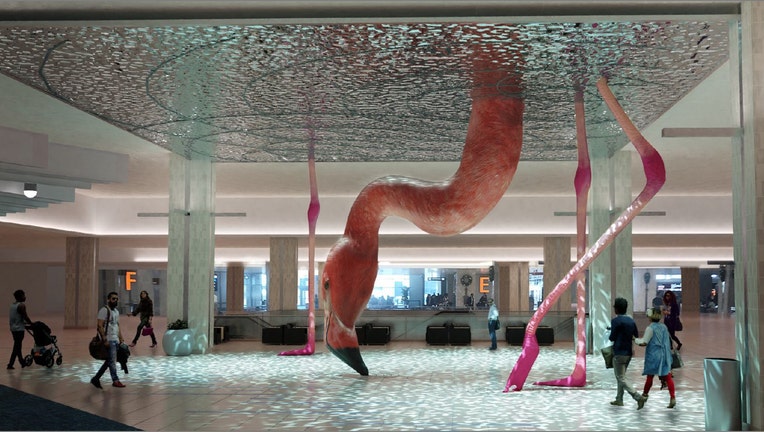 TAMPA, Fla. - Travelers coming and going through Tampa International Airport will soon be greeted by a 21-foot pink flamingo.

“HOME,” by Matthew Mazzotta, is a massive, floor-to-ceiling sculpture that depicts a hand-sculpted resin and fiberglass flamingo as it gently dips its head beneath the surface of the water. It will be located near the Shoppes at Bayshore in the airport’s main terminal.

"We are more than a place that people simply pass through – we are the first and last impression of the Tampa Bay region," said Airport CEO Joe Lopano. "Public art is critical to creating a sense of place and leaving our guests with a unique and engaging experience."

The other winning artists include:

•Soo Sunny Park, of Hanover, N.H., who will produce a hanging sculpture in the new SkyCenter atrium.
•Jason Hackenwerth, of St. Petersburg, Fla., who is creating a hanging sculpture called “Cove” for the third and fourth floor of the SkyCenter atrium.
•Jason Bruges, of London, England, who is creating a mixed media mural called “Cloud Ascent” to adorn the east wall of the red vertical circulation building.
•Catherine Wagner, of Oakland, C.A., who is creating a large mural featuring photos that are laser-etched onto anodized aluminum panels, for the northwest wall of the blue vertical circulation building.
•Jason Middlebrook, of Hudson, N.Y., who is producing a mural featuring a composition of local flora and fauna, for the northwest wall of the blue vertical circulation building.
•Aaron Stephan, of Portland, Maine, who created a hanging sculpture out of ladders called “Paths Rising”, for the main terminal helix space between the main terminal and SkyConnect station.

Two additional commissions will be considered by the Board at a later date.