LOS ANGELES, Calif. - San Francisco Giants pitcher Sam Coonrod was the only player to stand during a moment honoring the Black Lives Matter movement ahead of the season opener against the Los Angeles Dodgers, telling reporters after the game that as a Christian he “can’t kneel before anything besides God.”

MLB provided teams with a long black ribbon that players on both sides jointly held as they kneeled in unity.

Every player and coach from the Washington Nationals and New York Yankees took part in the demonstration ahead of their game, but hours later, Coonrod stood alone.

I’m a Christian," he said, according to TMZ Sports. “So I just believe that I can’t kneel before anything besides God.” 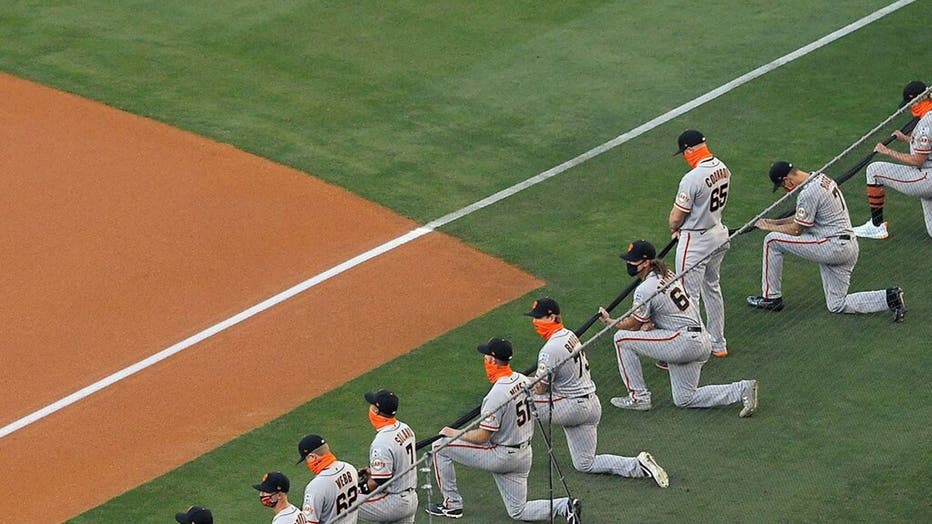 Most members of the San Francisco Giants kneel during a moment of silence prior to an opening day baseball game against the Los Angeles Dodgers, July 23, in Los Angeles. (AP Photo/Mark J. Terrill)

Aside from his religious beliefs, the 27-year-old relief pitcher said there are aspects of the movement that he disagrees with.

TRUMP READY FOR LIVE SPORTS BUT SAYS HE WON’T TUNE IN IF PLAYERS KNEEL DURING NATIONAL ANTHEM: ‘GAME IS OVER FOR ME’

Team manager Gabe Kapler, who kneeled during the ribbon ceremony as well as during the national anthem, said he respects Coonrod’s decision to stand.

"The one thing that we said is we were going to let people express themselves,” Kapler said. “We were going to give them the choice on whether they were going to stand, kneel or do something else. That was a personal decision for Sam.”

Dodgers outfielder Mookie Betts, who signed a 12-year, $365 million contract on Wednesday, and some of the Giants kneeled during the national anthem.

CLICK HERE TO GET MORE SPORTS COVERAGE ON FOXNEWS.COM

Several players during the Nationals-Yankees game wore T-shirts saying Black Lives Matter during batting practice, while the letters “BLM” were stenciled into the back of the mound at the center of the diamond.