How businesses have evolved in the pandemic era

amid drastic changes to social and economic life, Business owners around the world have learned lessons in how to survive and prosper in the pandemic era.

AUSTIN, Texas (AP) -  A guy walks into a bar, which still isn't allowed in Texas.

But Jeff Brightwell owns this bar. Two months into an indefinite shutdown, he's just checking on the place — the tables six feet apart, the “Covid 19 House Rules” sign instructing drinkers not to mingle. All the safeguards that didn't keep the doors open because Dot's Hop House & Cocktail Courtyard is a bar under Texas law. And bars, in a pandemic? “Really not good," Dr. Anthony Fauci, the nation's infectious disease expert, told Congress in June.

But some governors are warming up to good enough. Thousands of bars forced to close after massive virus outbreaks swept across the U.S. this summer could be starting to see an end in sight as cases drop off and the political will for continuing lockdowns fades. For some states, it is a gamble worth trying, only a few months after a rush to reopen bars in May and June ended in disaster.

“Our governor waved the magic wand, put us out of business and offered us nothing,” said Brightwell, whose Dallas bar typically employs around 50 people. He says his industry has been scapegoated.

Bars remain under full closure orders in more than a half-dozen states, including hard-hit ones like Texas but also Connecticut, which has one of the nation’s lowest positivity rates. And even in states already letting bars operate, restrictions vary from one county to the next and can tighten or loosen abruptly, reflecting the unease among governors even as reopening movie theaters and amusement parks create a look of getting over the hump.

Arkansas has one of the highest infection levels in the U.S. and is letting bars operate with partial capacity. Republican Gov. Asa Hutchison's defense: No spread has been linked to bars.

Experts say outbreaks nationwide have proven otherwise. Even in recent weeks, new outbreaks tied to college students returning to campus have resulted in bars shutting down again from Alabama to Iowa, undermining confidence that the time is right.

Still, governors are looking for a way. California began letting some bars in a few small counties reopen, though not where the vast majority of the population lives. Next might be Florida, where bars have been closed since June and Republican Gov. Ron DeSantis, a top ally of President Donald Trump, has mused whether bar closings even work since restaurants are serving alcohol anyway. “Everything’s open except the nightclubs and the pubs, and that’s something we’re going to address,” DeSantis said this week.

In Texas, where three in four of the state’s 13,400 deaths blamed on COVID-19 have occurred since July, the infection rate has dipped below the 10% positivity rate that Republican Gov. Greg Abbott has set as one criteria for letting bars back in business. He has teased that an another announcement about next steps in reopening could come early as this week, which won't come soon enough for the right wing of his party, which for months has blasted him over the lockdowns and a statewide mask mandate.

The decision is dicey for governors who, pressure from bar owners aside, have faced less blowback from keeping bars shut than other sectors. Polls showed about half of Americans favored requiring bars and restaurants to close when cases surged, and experts say the high risks of bars are by now proven — the combination of cozy spaces, loud music forcing people to lean in close and rounds of drinks relaxing even the best intentions to social distance. 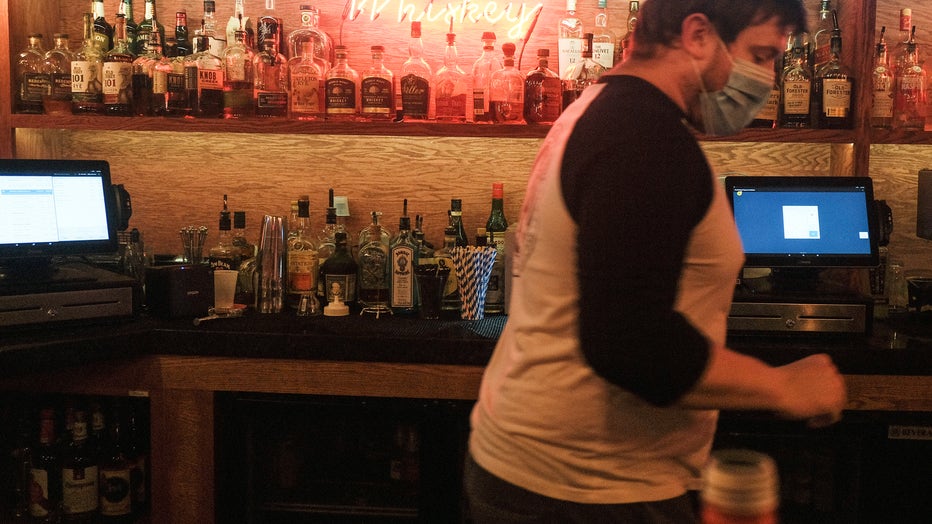 FILE - A bartender announces last call at a bar in the Short North District on July 31, 2020 in Columbus, Ohio.

Videos of crowded clubs have made bars avatars of rowdy rule-breakers, the ones ruining a return to normal for the rest of us.

“It’s way too soon. And it’s going to be too soon until we have a vaccine,” said Esmeralda Guajardo, the public health administrator in Cameron County on the Texas border, where hard-partying booze cruises on South Padre Island this summer drew fury from local officials.

For months, bar owners have protested outside state capitols, sued their governors and even sold alcohol in open defiance of closing orders. None have led to bars reopening any sooner. Hundreds in Texas have ramped up kitchens in order to legally operate as restaurants. .

It hasn't spared thousands of bars from ruin. More than 5,400 bars nationwide were dark in July, according to Yelp, which tracks the status of businesses on their website. More than 40 percent were permanent closures.

Mark McClellan, former head of the Food and Drug Administration who has been advising Abbott on Texas’ reopening, said the first reopening of bars in Texas was too soon but can see a case for waiting for a vaccine as too long.

“This is part of our economy and there are jobs at stake," he said. “It's hard to reopen dance clubs and night clubs for similar kinds of reasons. If we're going to try it, we need to learn what went wrong from the June reopening."

McClellan said more enforcement of rules at bars is one step. Last month, some Texas bars hired a lobbying group and pledged to screen the temperature of every patron at the door, a step that would go father than restaurants.