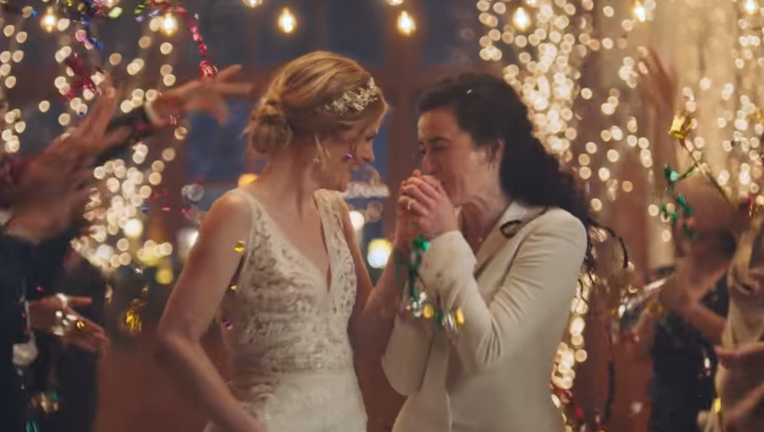 Under pressure from a conservative advocacy group, The Hallmark Channel has pulled ads for Zola, a wedding-planning website that featured a same-sex couple kissing at the altar.

The family-friendly network, which is in the midst of its heavily watched holiday programming, removed the ads because the controversy was a distraction, a spokesperson said in an interview Saturday.

“The debate surrounding these commercials on all sides was distracting from the purpose of our network, which is to provide entertainment value,” said a statement provided by Molly Biwer, senior vice president for public affairs and communications at Hallmark.

There was immediate criticism on Twitter. Ellen DeGeneres asked Hallmark: “Isn’t it almost 2020? What are you thinking? Please explain. We’re all ears.”

Biwer confirmed that a conservative group, One Million Moms, part of the American Family Association, had complained about the ads to Bill Abbott, CEO of Crown Media Family Networks, Hallmark’s parent company.

A post on the group’s website said that Abbott “reported the advertisement aired in error.” The group also wrote: “The call to our office gave us the opportunity to confirm the Hallmark Channel will continue to be a safe and family-friendly network.”

Zola had submitted six ads, and four had a lesbian couple. After Hallmark pulled those ads, but not two featuring only opposite-sex couples, Zola pulled its remaining ads, the company said.

“All kisses, couples, and marriages are equal celebrations of love and we will no longer be advertising on Hallmark,” Chi said.

In one of the pulled ads, two brides stand at the altar and wonder aloud whether their wedding would be going more smoothly if they had used a wedding planning site like Zola. The lighthearted ad ends with the two brides sharing a quick kiss on the altar.

“All the groovy gay ladies I know won’t be watching your Christmas schlock,” she wrote on Twitter, addressing Hallmark. “They’ll be out celebrating with their ’families’ wives, children, friends on & on and getting married in chic ensembles. Didn’t you all get the memo? Family is all-inclusive.”

The developments came as Hallmark appeared to be considering more same-sex themed content.

Asked about the possibility of holiday movies based on same-sex relationships, Abbott was quoted in The Hollywood Reporter in mid-November as saying on its TV podcast: “We’re open to really any type of movie of any type of relationship.”