CHICAGO - We may be snowflakes away from summer, but that's not stopping a new little league team from preparing for the field.

"I feel like since we are all girls they would doubt us, but they don't know how competitive we are," said catcher Rosie Gonzalez.

The girls, ages 10 to 12, come from all over the city and suburbs. Many were the only girls on their little league teams before this season.

Pitcher Diya Buonincontro can throw a 60 mph fast ball. Her dad says she threw a no hitter last year at the nationals, and that's not all.

"She's got a good knuckle-curve ball, she's got a slider and she's got a two-seamed fast ball," said Diya's dad Robert Buonincontro. He believes the opportunity of playing on an all-girls team has given his daughter leadership skills and more confidence.

"The girls just get me more," Diya said. "And sometimes there's one or two boys on the team that are rude to you and that's not the case on the girls team."

The team was founded by another "girl dad" named Chip Mitchell, who could see there was a need through his daughter's experience.

"So they see it on TV, but they're told from an early age that that's not the sport for them. You have to go play something called softball. So my daughter has always had a sense that that's not right and I have too, and that's why we started the team."

Right now, the team roster is set at 14. The girls practice in the UIC Physical Education building at least twice a week. A partnership with the non-profit Curtis Granderson Chicago Baseball and Educational Academy makes the practices possible.

Starting in May, the girls will be playing in the uber competitive Roberto Clemente Little League at Humboldt Park, and that's exactly where their team name was born. Just as you wouldn't expect to see a gator in the Humboldt Park Lagoon, you wouldn't expect an all girl's Little League team. But a gator was in fact found in the lagoon last year, and there will in fact be a history making team this year. 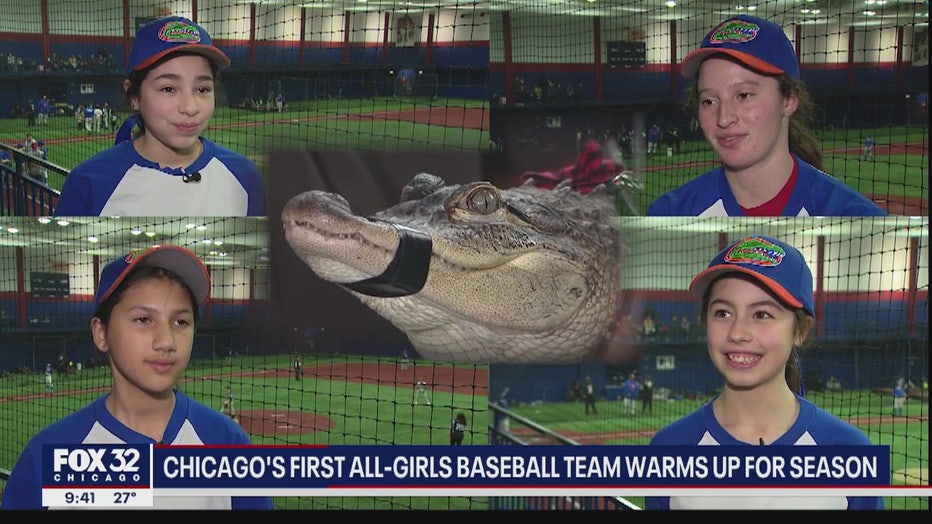 If this story reminds you of another Midwest classic, you're not alone. The real-life Rockford Peaches, featured in the movie "A League of their Own," have asked the Gators to speak at their September reunion.

For more information on the Humboldt Park Gators: https://www.facebook.com/HumboldtParkGators