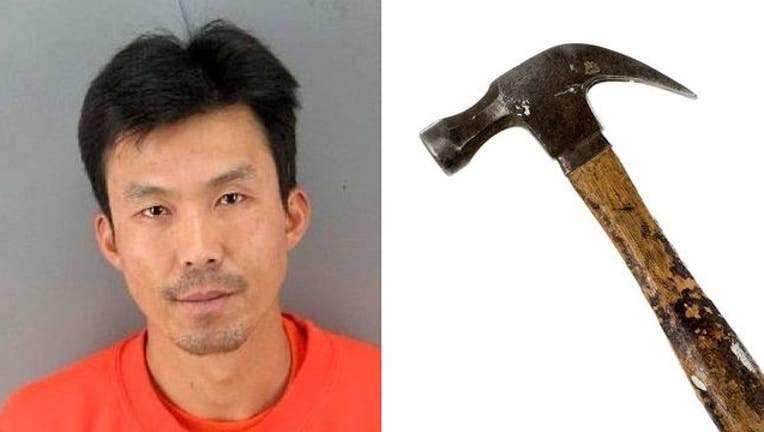 Binh Thai Luc after his arrest for the murder of the family of five. (SFPD)

(FoxNews.com) - An illegal immigrant from Vietnam faces life in prison after being convicted Monday in the 2012 hammer-killing of a family of five after losing money at a casino earlier in the evening.

Binh Thai Luc, who had a violent criminal history and was supposed to be deported in 2006, was found guilty in the murders of a family of Chinese immigrants. He was also found guilty of five counts of attempted robbery and two counts of burglary.

Luc, who was in debt and served an eviction notice, killed the family during a robbery after he lost money at a casino on March 23, 2012.

Prosecutors said the family kept thousands of dollars in cash in the San Francisco home. Luc had more than $6,500 with him during his arrest. The jury was told that Luc settled his debt after the killings.

“This was a very gruesome, brutal murder, and we’re pleased we’re getting some accountability for the family and for the community,” District Attorney George Gascón told The San Francisco Chronicle.

Despite no eyewitness accounts of Luc’s involvement, investigators said one of the family member’s blood was found spattered on Luc’s jeans. Luc’s blood was found on a pack of cigarettes, a receipt and a cabinet drawer, The San Francisco Chronicle reported.

Luc spent a decade in prison for robbery and assault with a deadly weapon for the 1996 armed robbery of a Chinese restaurant. He was ordered to be deported from the U.S. to his native Vietnam after his release, but the Vietnamese government did not provide the proper documents.

U.S. federal immigration authorities released Luc into the community in 2006.

The defense argued that someone else murdered the family, possibly a Chinatown gangster or an ex-boyfriend of one of the victims. Defense attorney Mark Goldrosen said the prosecution did not establish a motive for the crime.

Luc did not speak after the verdict was announced. Goldrosen said he was “quite disappointed” with the verdict.

“He understands that this is the beginning of the process and there are appellate procedures,” Goldrosen said.