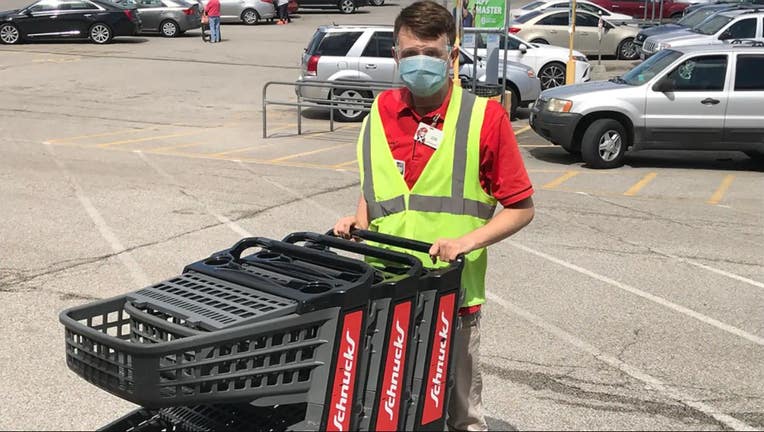 "We are very proud of Ben for coming to the rescue!" a spokesperson for Schnucks tells Fox News.

A supermarket employee in Illinois is being hailed a hero after sprinting across the store’s parking lot to save a baby who was strapped into a runaway shopping cart.

Ben Mazur, a courtesy clerk at a Schnucks supermarket in Alton, was wrangling shopping carts on March 17 when he heard a car horn "repeatedly and frantically honking," Schnucks recounted in a recent Facebook post. "As it turns out, the owner of the car was trying to get someone’s attention because there was a runaway cart rolling down the store’s parking lot," according to the supermarket chain.

Mazur quickly noticed it wasn’t just a cart — there was also a baby strapped into the child seat.

"The mom was putting her other kids in the car and they were honking the horn to get her attention," Mazur explained to Fox 2 of the baby’s mom.

Thinking quickly, Mazur bolted across the lot and stopped the cart before it slammed into a stop sign, the outlet reported.

"I stopped what I was doing and saved the baby," Mazur told Fox 2.

Now, both the management and clientele of Schnucks are praising Mazur’s heroic actions.

"We have a slanted parking lot and carts can get rolling fast," said Alton Co-Manager Tom Moore on Facebook. "Quick thinking on Ben's part saved the baby. Congrats, Ben, you're a hero!"

"Not all heroes wear capes," a customer added.  "Way to save the day."

"Faster than a speeding baby!" another joked. "Good job Ben."

"They need to have a "Ben Mazur" day at the store!! With cake," a fan suggested.

A representative for Shnucks further confirmed that Mazur was rewarded by the management of the Alton location.

"We are very proud of Ben for coming to the rescue!" a spokesperson for Schnucks tells Fox News. "One of Schnucks' core values is to 'execute to win,' and without hesitation, that is exactly what Ben did to save the baby. He was truly the hero of the day."

Schnucks currently operates over 110 locations in the Midwestern U.S.