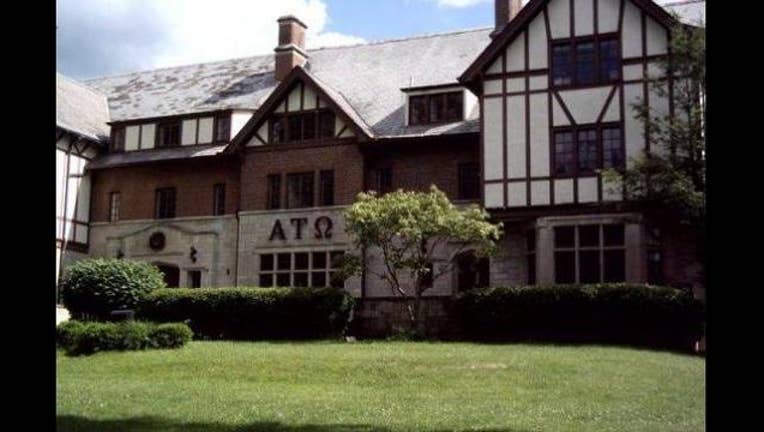 INDIANAPOLIS (AP) — Alpha Tau Omega revoked the charter and closed its Indiana University chapter Thursday following the release of a video purportedly showing a fraternity member performing a sex act on a woman.

The national fraternity's action came just hours after the university in Bloomington, about 50 miles southwest of Indianapolis, announced it had suspended the campus chapter while it investigated the recording that surfaced on social media.

Alpha Tau Omega's Indianapolis-based national office said the "highly inappropriate and vulgar video" from a smartphone shows an event last week involving a 21-year-old member of the chapter and two female exotic dancers hired by one of the members.

It said the event involved about half the chapter and no pledge was compelled to participate.

"Regardless, the actions are contrary to the ideals and principles of Alpha Tau Omega and are highly offensive," Alpha Tau Omega's national CEO Wynn Smiley said.

In the video, the man in his underwear is surrounded by a crowd of shouting onlookers, some of them partially dressed. It was not clear whether any of what occurred was coerced or whether any criminal charges might be pursued.

University spokesman Mark Land said school officials didn't know whether the women in the video were forced to do anything against their wills.

Land said the university's student ethics and student life offices would be leading an investigation and that he didn't know whether the campus police department would be involved. The Monroe County prosecutor's office wasn't yet involved in the case, Chief Deputy Prosecutor Robert Miller said.

The university said the fraternity chapter was notified about the suspension Wednesday evening and that if the allegations were confirmed they would "represent violations of the university's student code of conduct and will not be tolerated."

The fraternity chapter on the 38,000-student campus faced disciplinary action in 2010, when the national headquarters kicked out more than two-thirds of its members after an investigation into hazing and alcohol violations. Smiley said at the time that some members had an attitude that the fraternity's purpose was to be "party central."

In June, the Indiana State University in Terre Haute suspended the fraternity for violations including providing alcohol to minors, hosting unauthorized events and tampering with fire-suppression equipment.