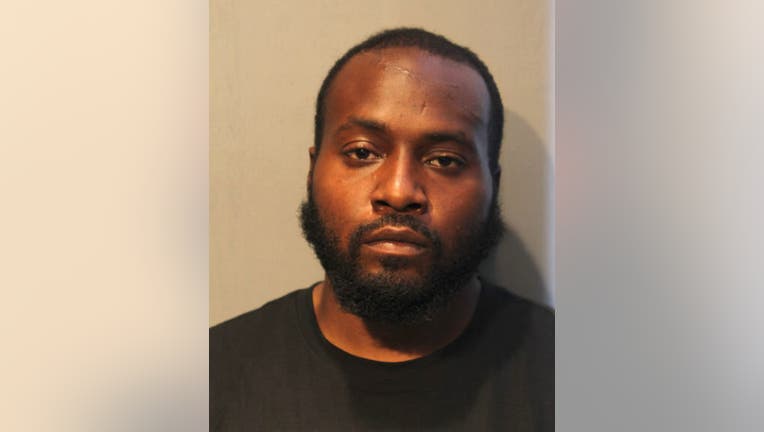 CHICAGO - A motorist was allegedly drunk and high on ecstasy when he sped away from police officers during a traffic stop and crashed his car, killing a long-time friend and injuring several others in Englewood last year.

Washington was driving with Yancey and two others when a pair of Chicago police officers spotted him without a seatbelt, Assistant State’s Attorney James Murphy said. The officers turned on their lights and sirens in an attempt to pull him over, but Washington allegedly sped off through a stop sign in his Pontiac.

The officers chased him to 71st Street and Lowe Avenue where they called off the pursuit as Washington drove into oncoming traffic. But the police continued to follow him at a distance and without their emergency equipment turned on, Murphy said.

Just as he hit the brakes, Washington struck a Mitsubishi occupied by two women, causing his Pontiac to launch into the air before hitting a tree and landing upside down, Murphy said.

The circular pattern of blood inside the Pontiac indicates it spun on its roof several times after crashing in the 400 block of West 71st Street, Murphy said.

Yancey, who was ejected from the Pontiac, died at the scene. The three others in the Pontiac, including Washington, were treated for broken bones, authorities said. The women in the other car were listed in good condition.

Police recovered two guns found in the area of the crash, Murphy said.

Although Washington was pulled from the front passenger seat, DNA analysis shows that he was driving before the crash, Murphy said. The car was registered to Washington, who was not wearing a seatbelt.

Washington’s blood-alcohol level was 0.19 following the crash — more than double the 0.08 limit, Murphy said. He also allegedly tested positive for amphetamine and oxycodone.

Washington told police he was at a party before getting behind the wheel and had consumed ecstasy, alcohol and marijuana, Murphy said.

There was no explanation given in court Wednesday as to why it took a year to charge Washington.

While Judge Wesley Willis ordered 26-year-old Washington held on $20,000 bail for aggravated DUI and reckless homicide, he said he was close to revoking it.

“Rather than stopping, you did one of the most dangerous things an individual can do: To drive a weapon, that is, a car, at a high rate of speed from police,” Willis said.

“People who flee from police are a danger. They don’t show a sanctity for human life for the people who may be in danger. I came close to not granting this bond.”

Washington’s only prior criminal charge was for driving 30 mph over the speed limit in Will County, Murphy said.

Washington graduated from Thornwood High School in South Holland and now works two jobs painting at his dad’s business and as a dispatch supervisor for Amazon in Indiana, his attorney said.

“This is a very tragic situation,” the defense attorney said. “Everyone in the vehicle were all lifelong friends.”

Willis recommended Washington be placed on electronic monitoring if he is able to post bond.

He is expected to appear in court again on Aug. 18.