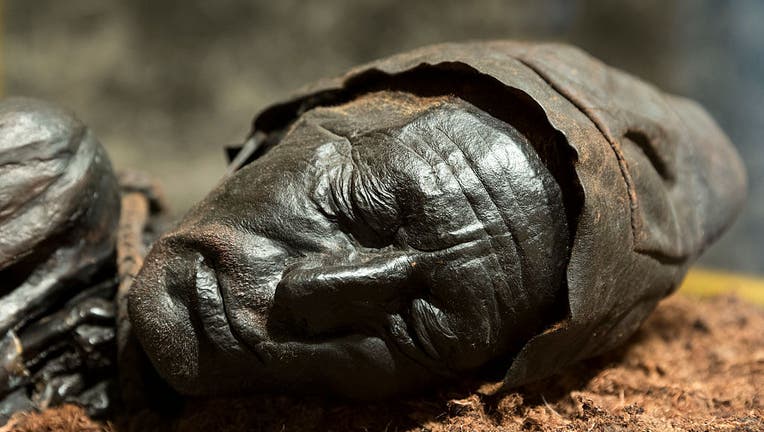 Ancient bronze statue of Tollund Man, bog body from the Iron Age, at the Museum Silkeborg in Denmark

A re-examination of the last meal of an Early Iron Age Denmark bog body called Tollund Man has revealed new details about his final hours.

According to findings published Wednesday in the journal Antiquity, 12 to 24 hours before Tollund Man was killed he ate a bog-water porridge made of barley, pale persicaria, flax and likely fish.

Researchers, led by the Silkeborg Museum's Nina Nielsen, also reported finding eggs and proteins from intestinal worms, indicating that the man was infected with parasites including tapeworm, whipworm and mawworm.

"Although the meal may reflect ordinary Iron Age fare, the inclusion of threshing waste could possibly relate to ritual practices," the report noted. "This re-analysis illustrates that new techniques can throw fresh light on old questions and contribute to understanding life and death in the Danish Early Iron Age."

Tollund Man's death – likely some form of human sacrifice -- dates back to some 2,400 years ago and the research highlights that thousands of people came to their end in the wetlands of North-west Europe during the Iron Age.

Those placed in acidic peat bogs were turned into naturally mummified and preserved "bog bodies," giving scientists a detailed and unique look into daily life at the time, including health, diet, manner of death and a final meal.

Tollund Man, who was 30 to 40 years old when he died, had previously been hanged and placed into the peat-cutting pit.

He was found during peat cutting in Bjældskovdal in 1950 and it was in that year that his stomach and intestinal tract were removed during forensic examinations before the contents of different parts of his gut were separately extracted in 1951.

"To gain the most information from the gut content, we decided to analyse the plant macrofossils, pollen, non-pollen palynomorphs (NPPs), lipids/steroid markers and proteins. Pollen and NPP analysis can reveal microscopic evidence of consumed food and drink. While the gut contents of a few bog bodies have been analysed for pollen (e.g. Scaife 1986, 1995), our work constitutes the first application of a full NPP analysis of a bog body's gut content," the report said. "In addition, the analysis of parasite eggs can illuminate individual health conditions; they have been observed in several cases (van der Sanden 1996), including Tollund Man, where whipworm (Trichuris) eggs were recorded (Helbæk 1959). Analyses of steroids and proteins can reveal chemical traces of consumed food and drink (e.g. from animal products) (Shillito et al. 2020), which so far have not been documented in Tollund Man."

In this re-investigation, the team said they had looked for ingredients that could relate to rituals, explored whether the weed seeds – also found in several other bodies -- could represent a food shortage, and sought to investigate Iron Age health and sanitation as well as cooking practices.

The team noted that previously input had argued that meat had not been a part of Tollund Man's last meal, but they had found that the "coprostanol:5β-stigmastanol peak-area ratio of 3:1 represents a zoosterol level higher than in herbivores," indicating Tollund Man's last meal included both cholesterol-containing and plant-based foods.

The paper added that five peptides unique to bony fish were identified, providing what they said was "clear evidence of the consumption of fish as part of the last meal," noting Bjældskovdal's proximity to a lake and watercourses.

And lastly, they noted that the presence of a tapeworm infection indicated that Tollund Man had previously consumed raw or undercooked meat infected with tapeworm cysts.

"Our study shows that it can be beneficial to re-analyze bog body gut contents stored in museum collections, and that combining pollen, NPP, macrofossil, steroid and protein analyses can yield further useful data," the report asserted, adding that ongoing analysis was being done involving the search for aquatic lipid biomarkers. "Our quantification and identification of the different ingredients in Tollund Man's last meal at a new level of detail can be used for comparison in future projects."