Investigators are still trying to determine if Jake Cefolia, 49, voluntarily "went off the grid" or if there was foul play involved in his disappearance.

CHICAGO - It's been almost a year since a former United Airlines executive from Elmhurst disappeared.

Investigators are still trying to determine if Jake Cefolia, 49, voluntarily "went off the grid" or if there was foul play involved in his disappearance.

Police say Cefolia was last seen at an Elmhurst gas station on the morning of Aug. 7, 2020. His ex-wife called 911 the following afternoon – the same day Cefolia's car was found in the Waterfall Glen Forest Preserve.

Elmhurst Police, with the help of several other law enforcement agencies, have continued to search the forest preserve for the last year.

Through a Freedom of Information Act (FOIA) request, FOX 32 has learned investigators have searched Waterfall Glen at least 10 times since Cefolia disappeared.

The most recent search took place April 1. There have been several other searches of the Des Plaines River and the perimeter of Argonne Laboratory.

One search involved 75 rescuers and 548 hours of manpower.

"Law enforcement is now thinking, 'either this person needs to be found and unlikely they’re alive or perhaps, they don’t want to be found,'" said Dr. Bryanna Fox, Associate Professor of Criminology at the University of South Florida and a former FBI Special Agent. "In most cases, from our research, what we’re finding is when people run away or go missing, they are either running away from something or to something. It could be an abusive environment. It could be legal trouble."

FOX 32 Chicago has also learned Elmhurst Police executed a search warrant at Cefolia's house on August 6 – the day before he disappeared.

According to the report, evidence was collected and packaged.

Several published reports indicate Cefolia had been the subject of a criminal investigation by Elmhurst Police. Those reports have not been confirmed.

On Aug. 15, 2020, there was a possible sighting of Cefolia caught on security camera at the Coeur d'Alene Golf Resort in Idaho.

Elmhurst Police received a call saying he was spotted at the resort's pro shop. However, when police tried to confirm it was him by showing Cefolia's family the video, some thought it was him while others did not.

A coworker and friend of Cefolia's told police he was "under immense amounts of stress" because he had to take a 50 percent pay-cut with the same amount of child support to pay.

The coworker also said Cefolia, "was worried because he was in charge of laying off a large number of United employees due to economic downturn."

Another friend told investigators Cefolia struggled with anxiety and had started seeing a therapist two weeks before he went missing. 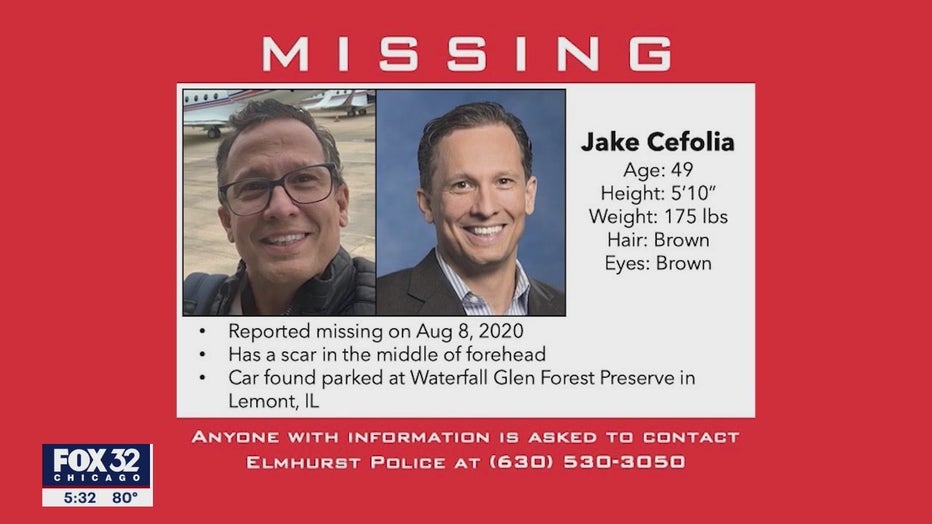 Several pages on Facebook devoted to Cefolia's disappearance have been created over the past year, including The Disappearance of Jake Cefolia, in hopes of garnering leads.

Currently, some pages are more active than others.

"Our research shows social media is incredibly important," said Fox.  "It's almost the new milk carton these days.  It keeps [cases] fresh in people’s minds, they can add in new things, new leads, new evidence and it can help people to want to help solve this case."

"Most of the time, I see family members pleading for that type of attention whenever they can get it," she said.

But that kind of pleading doesn't seem to be happening in Cefolia's case.

So far, no reward has been offered for information regarding his disappearance.

When FOX 32 asked the Elmhurst Police Department for an update, we were told the investigation is still open and that our request for an on-camera interview was declined "out of respect for the family."

A Cefolia relative we contacted declined to be interviewed "out of respect for the people involved."

FOX 32 also contacted the family through a private investigator they hired and received the following statement:

"The family of Jake Cefolia has no comment at this time regarding the search for our missing family member. We are continuing to monitor the search for Jake that is being conducted by the Elmhurst Police Department (EPD) and would refer you to the EPD for any updates."

In January, Elmhurst Police asked the FBI if Cefolia could be added to its list of missing or kidnapped persons.

According to FOIA documents, EPD was told 'no' because there was no sign of foul play.

If you have any information regarding the disappearance of Jake Cefolia, call the Elmhurst Police Department.