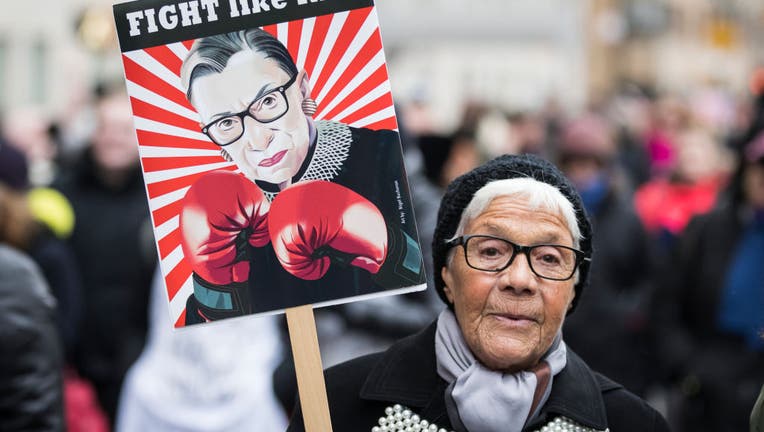 MANHATTAN, NY - JANUARY 18: An older marcher holds a sign that says "Fight like RBG" with a picture of Ruth Bader Ginsberg Associate Justice of the U.S. Supreme Court wearing boxing gloves as she walks past Trump International Tower during the Woman'

WASHINGTON - It’s been a throwaway line in presidential campaigns for years: Roe v. Wade is on the ballot.

This time it is very real.

The death of Justice Ruth Bader Ginsburg so close to a presidential election and the vacancy it creates on the Supreme Court, coupled with President Donald Trump’s political imperative to energize social conservatives in key states, urgently provided a new frame for Trump’s case for a second term. And it has animated supporters of abortion rights at least as much.

If Trump is able to install his nominee in that seat, both sides agree there’s a better chance than ever that Roe v. Wade — the 1973 decision established a nationwide right to abortion — could be overturned or gutted.

“We have been apprehensive for years, but this is more worrisome — this is a seismic shift,” said Jennifer Dalven, director of the American Civil Liberties Union’s Reproductive Freedom Project.

During his 2016 campaign, Trump, who had previously expressed unqualified support for abortion rights, won over skeptical anti-abortion leaders with multiple pledges to combat abortion, including choosing Supreme Court justices open to dismantling Roe v. Wade. Now, with Trump hoping to fill a vacancy for the third time and give the nine-member court six conservative justices, that pledge has new import.

“It is at least conceivable for the first time that we have a majority that would overturn Roe, and the battle would return to the states,” said Andrew Bath, executive vice president of the Thomas More Society, a conservative public interest law firm.

It remains uncertain if the Senate will hold a confirmation vote before the Nov. 3 election, and how it would respond if Trump lost to Democrat Joe Biden before the vacancy is filled. But Trump has urged the Senate to move quickly, and Senate Majority Leader Mitch McConnell, R-Ky., said there will be a vote on Trump’s nominee.

If a Trump nominee is confirmed and a reconfigured high court did eventually overturn Roe, the likely outcome would be a patchwork of laws in various states. Some states would protect abortion access, others would enact near-total bans, and many would struggle over what new limits they might impose.

Planned Parenthood, the nation’s largest abortion provider, says that if Roe were dismantled, sweeping bans could be imposed in 20 states that are home to an estimated 25 million women of reproductive age.

The high court has plenty of options if it wants to reexamine Roe. Planned Parenthood’s president, Alexis McGill Johnson, says there are 17 cases involving state-level abortion restrictions that are pending in federal courts “only one step away from the Supreme Court.”

Julie Burkhart, who operates abortion clinics in Oklahoma City and in Wichita, Kansas, already has a sense of the consequences of a Roe v. Wade reversal, based on events this year in the early months of the coronavirus pandemic.

The governors of Texas and some other Republican-led states issued executive orders banning most abortions on grounds they were non-essential medical procedures. Before those bans were quashed, many Texas women journeyed to out-of-state abortion clinics, including Burkhart’s Wichita clinic where the patient load quadrupled at one stage.

”It gave a peek into what a post-Roe world would look like, which was not a pretty sight,” Burkhart said. “It was devastating and heartbreaking.”

There are numerous organizations assisting women who need to travel out of state to access abortion, and such efforts are likely to expand if state abortion bans are permitted.

There’s also likely to be an increase in do-it-yourself abortions, according to attorney Jill E. Adams of If/When/How, which seeks to provide accurate information about this option and discourage authorities from criminalizing it.

Remembering RBG in Oakland and SF

More than 150 people came out to Lake Merritt to remember Ruth Bader Ginsburg in a call and response. There was another memorial for her in San Francisco.

Already, many abortions are induced at home with a two-drug combination, under the guidance of a health professional. Advocacy groups say home abortions using one of the drugs — misoprostol — can be done safely without professional oversight.

“If Roe is overturned or gutted, more people will need this option,” Adams said.

Last year, at least eight states passed sweeping abortion bans — most of them so-called heartbeat bills that could ban abortion as early as six weeks into a pregnancy. Tennessee lawmakers approved such a measure this year.

All the new bans have been at least temporarily blocked by judges.

In June, a divided Supreme Court struck down a Louisiana law regulating abortion clinics, reasserting a commitment to abortion rights over opposition from dissenting conservative justices in the first big abortion case of Trump’s presidency.

Chief Justice John Roberts and his four more liberal colleagues, including Ginsburg, ruled 5-4 that a law that requires doctors who perform abortions to have admitting privileges at nearby hospitals violates the rights established by Roe v. Wade.

Were Roberts to side with the three remaining liberals in future abortion cases, that bloc could be potentially outvoted by five conservatives — including the new Trump nominee.

Nancy Northup, president of the Center for Reproductive Rights, noted that most recent abortion cases reaching the Supreme Court were decided by one-vote margins.

“The fact that the court was so close — with Ruth Bader Ginsburg on it — sends shivers down my spine in terms of how critical this next appointment is,” she said.

“Some state-level pro-life laws have been specifically drafted in such a way to obtain the vote of John Roberts,” New said via email. “If a Trump nominee is confirmed, it is possible that some states may pursue stronger laws that offer greater protection to the unborn. “

Among the favorites of many in the anti-abortion movement is Amy Coney Barrett, a devout Roman Catholic who taught law at the University of Notre Dame before taking a seat three years ago on a federal appeals court. Trump has said he will nominate a woman and has spoken highly of Barrett.

New said Trump could benefit from making a nomination even if the Senate doesn’t act on it until after the election.

“Aggressive criticism of an otherwise qualified Supreme Court nominee may well work to the political advantage of the president and other Republican candidates,” New said.

There are two abortion-related state ballot measures up for a vote on Nov. 3 — a measure in Louisiana stipulating there is no right to abortion or abortion funding in the state Constitution, and a measure in Colorado that would ban abortion after 22 weeks of pregnancy.

The proposed Colorado ban would allow abortions after that time only if a woman’s life is endangered. It makes no exceptions for rape, incest or a severe fetal abnormality.

There is some limited consensus among the rival sides in the abortion debate: It won’t be ended by a reversal of Roe.

“The issue of abortion has divided this nation like no issue since slavery,” said Andrew Bath of the Thomas More Society. “These battles are going to rage no matter what the Supreme Court decides to do.”