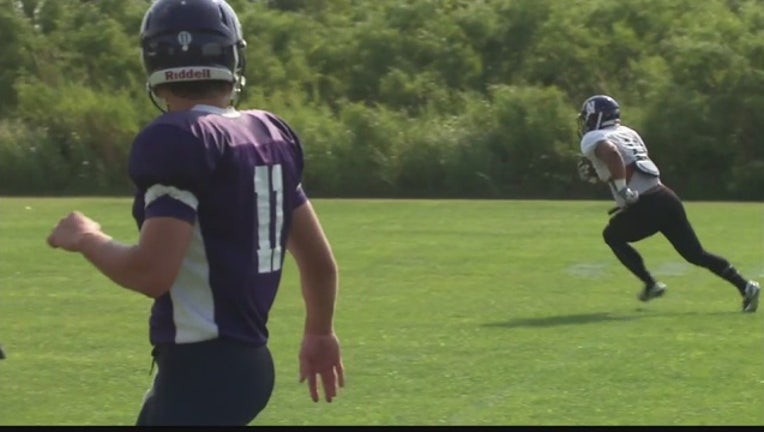 CHICAGO (AP) - The National Labor Relations Board on Monday blocked a historic bid by Northwestern University football players to form the nation's first college athletes' union, dealing a blow to a labor movement that could have transformed amateur sports.

In a unanimous decision, the board said the prospect of union and nonunion teams in college could lead to different standards at different schools - from how much money players receive to how much time they practice - and create competitive imbalances on the field.

Some observers said the ruling effectively ends any chance to establish labor unions in college athletics.

"This puts the nail in the coffin of organizing college players," said Ronald Meisburg, a former attorney for the NLRB and onetime board member.

"It is a bump in the road," Waters said.

The face of the union-building effort, former Northwestern quarterback Kain Colter, also expressed disappointment. But he said the push for unionization had already pressured the NCAA to take athletes' grievances more seriously.

"It turned out to be the right thing to do, and I don't regret it," Colter said.

The labor dispute goes to the heart of American college sports, where universities and conferences reap billions of dollars by relying on amateurs who are not paid. In other countries, college sports are small-time club affairs, while elite youth athletes often turn pro as teens.

The biggest factor in how it ruled, the board said, was the NLRB's jurisdiction, which extends only to private schools like Northwestern, the sole private institution in the Big Ten. The board repeatedly cited the need for standardization of rules and policies in sports and said giving the green light to just one team to collectively bargain would disrupt that uniformity.

NLRB rules do not offer the losing side the option to appeal. But Ramogi Huma, a former linebacker at UCLA who worked closely with Colter, said he has not given up on bringing unions to college football.

The board seemed to leave open the possibly of taking up the unionization issue again if it involved other schools or if conditions change for Northwestern football.

But Meisburg said the way the ruling highlights the challenges of organizing sports at private and state schools means the board is unlikely to consider another union petition from a college team.

"I don't see those institutional problems going away," Meisburg said.

Northwestern became the focal point of the labor fight in January 2014, when Colter announced plans to form the first U.S. labor union for college athletes. He appeared at a news conference for the College Athletes Players Association.

Three months later, regional NLRB Director Peter Sung Ohr issued his decision, saying Northwestern football players should be able to unionize. A month later, players cast secret ballots on whether to unionize. Those ballots were sealed during the appeal and will now be destroyed without being counted.

While NLRB decisions sometimes split along party lines, the three Democrats and two Republicans on the board all agreed.

Under U.S. law, an employee is regarded as someone who receives compensation for a service and is under the direct control of managers. In Northwestern's case, Ohr concluded coaches are the equivalent of business managers and scholarships are a form of pay.

On Monday, Waters criticized the NLRB for sidestepping the most sensitive question: Are scholarship players employees?

"It's like they had a hot potato tossed into their laps, and they took a year and a half of deliberations and said, 'We're going to toss it back,'" he said.

The board's decision was welcomed by the NCAA, which has been fighting lawsuits from former athletes over everything from head injuries to revenue earned from their likenesses in video games.

In a statement, the Indianapolis-based NCAA portrayed the board's ruling as recognition that it's trying to improve conditions for athletes.

"This ruling allows us to continue to make progress ... without risking the instability to college sports that the NLRB recognized might occur," it said.

The NCAA recently cleared the way for the five biggest conferences, including the Big Ten, to add player stipends to help athletes defray some of their expenses.

Northwestern, the Big Ten and the NCAA all argued against the unionization effort, saying that lumping college athletes into the same category as factory workers would change amateur athletics for the worse.