The deadline to submit nomination petitions to run for Chicago mayor was Monday.

CHICAGO - After turning in her nominating petitions Monday morning — a stack of signatures nearly half as tall as she is — Mayor Lori Lightfoot flexed a bit as she explained her decision to skip the chance to get her name on the bottom of the ballot, a position some believe offers an advantage.

"It’s not about the last spot, the positioning on the ballot, as if you are an unknown and people don’t know you. They know who I am. And our voters are going to find us," Lightfoot said. "So we wanted to get this done this morning, get our folks geared up and ready for the next leg of the journey. And I’ve actually got a city to run as well, so getting back to the business of the people."

Candidates seeking a spot in a lottery for the last ballot spot were required to hand in their nominating petitions toward the end of the day Monday. Candidates seeking to have their names on the top of the ballot handed in their petitions last week as soon as the city’s election office began accepting them.

Lightfoot’s election attorney, Michael Dorf, wheeled her petitions into the city’s election supersite at Clark and Lake streets using a hand truck, a fancier name for a dolly.

"I take nothing for granted. I know it’s going to be a lot of hard work," Lightfoot said. 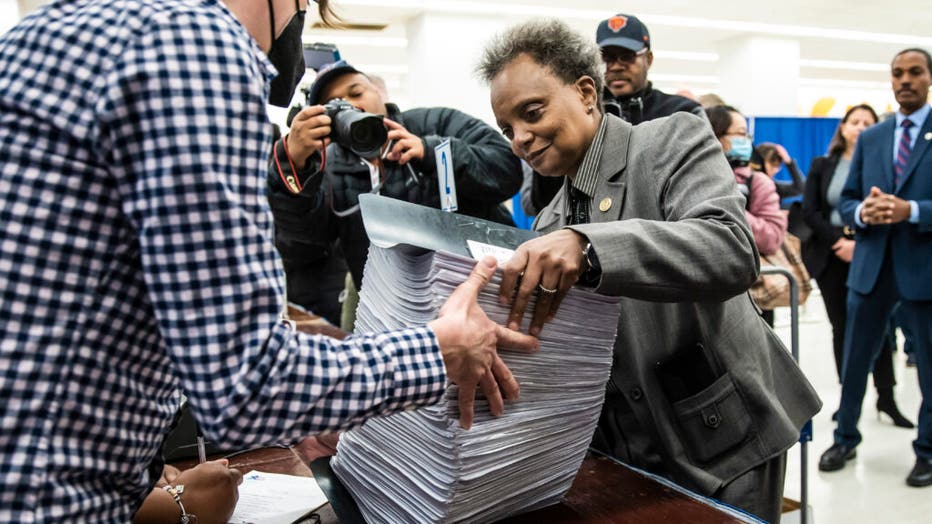 Lightfoot was accompanied by her wife, Amy Eshleman, and about 20 supporters carrying campaign signs, including several that proclaimed "I’m ridin’ with Lori" and showed Lightfoot at the steering wheel of a red convertible.

U.S. Rep. Jesús "Chuy" García, a relative latecomer who announced his mayoral bid earlier this month, was expected to file his nominating petitions toward the end of the day to get in the lottery for the bottom ballot spot.

Ald. Roderick Sawyer was expected to turn in his nominating petitions for mayor Monday afternoon. The 6th Ward alderman was attending a committee hearing on racial inequities in HIV funding, and would file after it concluded, a spokesman said.