Mayor Lori Lightfoot said Monday she "fully expects" the Christopher Columbus statue to return to its pedestal in Grant Park.

CHICAGO - Mayor Lori Lightfoot on Monday hinted strongly that she plans to ignore a controversial recommendation from her own monuments committee to permanently sideline statues of Christopher Columbus in Grant and Arrigo parks and remove the Balbo Monument in Burnham Park.

Lightfoot said she has not yet officially received the volatile suggestion. She expects to get it soon and plans to "take a look at it."

But it sure sounds like the verdict is already in.

The purely advisory recommendation nearly two years in the making is likely to be ignored — particularly when it comes to the two Columbus statues as well as a Columbus monument near 92nd Street and South Chicago Avenue.

Lightfoot described Columbus as an "incredibly controversial figure, given what happened to the Native population across the Americas" when he arrived here.

"He didn’t discover America, right? The Native populations were here for centuries before Columbus sailed here," she said.

Chicago might have seen the last of Christopher Columbus.

"But I also know that Columbus is an incredibly important figure to many — not the least of which is the Italian American community in Chicago. So we’ve got to put that into the proper context."

Italian American Ald. Nick Sposato (38th), who served on the 30-member committee, has argued the advisory recommendation was pre-determined by its composition — as he put it, "27 lefties and three righties," including himself.

Now that Lightfoot is dropping strong hints about ignoring the recommendation, Sposato is relieved, to say the least.

"Every time they disagree with something — these Antifa, these thugs, these lefty loons — we can’t let them win. Things can’t work this way where, if you don’t like something, you’re gonna go terrorize it by taking it down, and trying to kill and maim police officers. We can’t cave to the pressure of the terrorists/thugs."

Ron Onesti, president of the Joint Civic Committee of Italian Americans, had joined Sposato in demanding that Lightfoot ignore the advisory recommendation and honor her promise to return the statues to their pedestals in Grant and Arrigo Parks, and the South Chicago monument. He, too, was thrilled to hear what the mayor had to say. 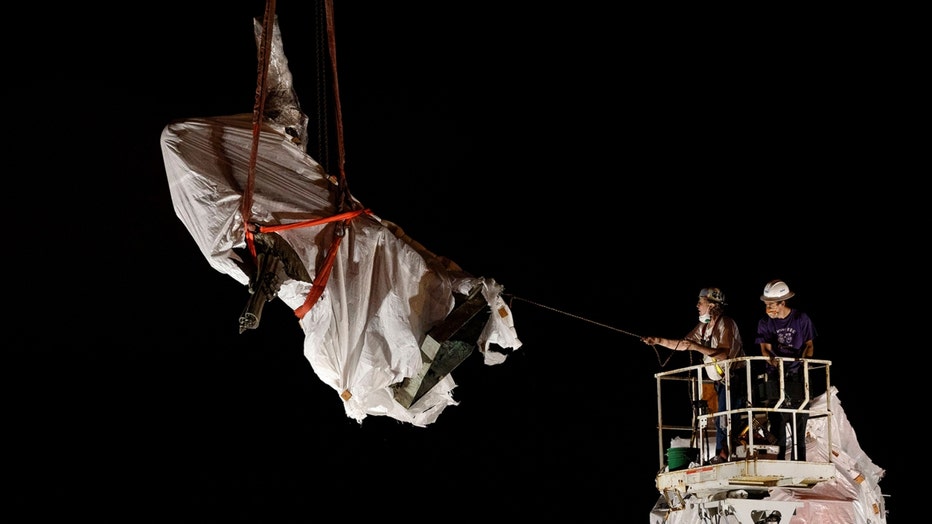 "Any action that keeps the monuments down and buildings closed is succumbing to the thugs, succumbing to the criminals and the radicals. We have to prove now that Chicago is a strong city and is able to protect itself from the evils that have come out during all of this," Onesti said.

At a time in our society when things have been so radical and taken for face value, people have to see just how deep these traditions are and how much they mean to our culture. What can happen to our heritage and our culture can happen to anybody."

In July 2020, Lightfoot ordered two Columbus statues "temporarily" removed in the middle of the night based on information that something bad was about to happen.

At the same time, the mayor argued, statues of Columbus in Grant and Arrigo parks — statues vandalized repeatedly since the death of George Floyd — should not be torn down, but rather used to confront the nation’s history and trigger a long-overdue "reckoning."

'My d*** is bigger than yours and the Italians': Lightfoot throws tirade over Columbus statue

A civic leader is demanding that Chicago Mayor Lori Lightfoot apologize for the obscene and derogatory remarks a lawsuit alleges she made about Italian Americans during a phone call to discuss the statue of Christopher Columbus removed from Arrigo Park.

City Hall then launched the Monuments Project and created an advisory committee to conduct a comprehensive review of more than 500 Chicago statues and monuments to identify those that were offensive, problematic or not representative of the city’s values of equity and justice.

Although Sposato and Onesti both want the Columbus statues returned to the parks, they argued that can’t and shouldn’t happen without a security plan in place.

"We are engaging professional security firms for consultancies. That’s what we’ve been asking for all along. So, we’re going forward with putting together security plans, safety plans and vandalism plans," Onesti said.

"Fiberglass may not be good because they may throw paint at it and wreck it. Barbed wire would look terrible. I don’t have the answer right now. The group of us has to get together and figure out a safety plan before we put it back up," Sposato said.