Mayor Lori Lightfoot said Monday she "fully expects" the Christopher Columbus statue to return to its pedestal in Grant Park.

CHICAGO - Mayor Lori Lightfoot said Monday she "fully expects" the statue of Christopher Columbus to be returned to its pedestal in Grant Park, but not before a security plan is in place to prevent a repeat of the 2020 debacle that left dozens of ambushed police officers injured.

"I’m not gonna do anything that puts our officers in harm’s way. I will probably be forever haunted by the experience of the vigilantes, who attacked our officers in Grant Park that summer. Came armed with — not signs, but frozen water bottles, firecrackers and other things that severely wounded many of the police officers [who] were there," the mayor said.

Lightfoot noted residents "care deeply about" certain "legacy" statues — particularly those that have been the "subject of controversy," such as the Grant Park Columbus statue.

Her overriding goal is "making sure that, if that statue comes back, which I fully expect that it will, that we have a safety plan in place."

Ron Onesti, president of the Joint Civic Committee of Italian-Americans, was pleasantly surprised to learn Lightfoot expects the Columbus statue to be returned to Grant Park.

In July 2020, Lightfoot ordered the two Columbus statues "temporarily" removed in the middle of the night based on information that something bad was about to happen.

But Onesti said another Columbus statue — the one removed from its pedestal in Arrigo Park — must also be "part of the conversation."

Onesti said he’s tried for months to meet Lightfoot to discuss security plans for both Columbus statues. His lawsuit against the city was filed only after the mayor ignored those demands.

"It was never solely, ‘Give me the statue back.’ It was, ‘Let’s sit down, mayor. Let’s have a conversation with regards to a vandalism plan, a security plan, a financial plan, a transportation plan. These were things we needed to discuss. That’s what forced our hand with the lawsuit in the first place. It was because we couldn’t get this type of conversation and still haven’t," Onesti said.

"This whole thing about the statues could just go away and not be spending any dollars on attorneys. Let’s just put it back. Let us be part of the planning with regard to safety and security. And then, we could still go through the process of really determining what is best for the city and the statues." 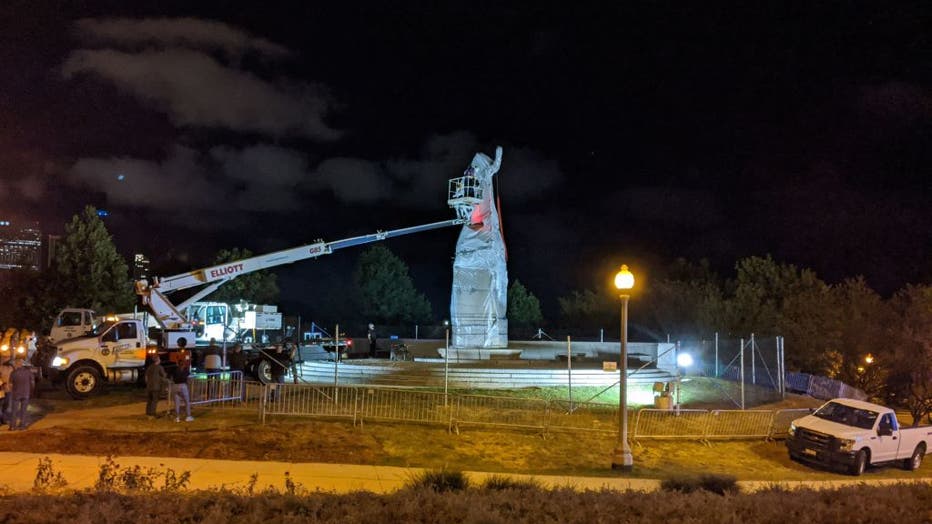 Onesti acknowledged it might be best in the long run to move one or both Columbus statues — but only after they are at least temporarily returned to Grant and Arrigo Parks.

"There’s a few ideas that I have that I’d love to talk to the mayor about. … There are several options. It could be part of a traveling situation. It could be part of a museum situation. It’s the 130th anniversary of the World’s Fair next year … that these statues were built for. Maybe we do something with regard to that. There’s a lot of creative options that I’m ready to unveil or unfurl at the mayor if she would just kind of sit down with us," he said.

In July 2020, Lightfoot ordered the two Columbus statues "temporarily" removed in the middle of the night based on information that something bad was about to happen.

At the same time, the mayor argued that the statues — vandalized repeatedly after the death of George Floyd by Minneapolis police — should not be torn down, but used to confront the nation’s history.

City Hall then launched the Chicago Monuments Project and created an advisory committee to conduct a comprehensive review of more than 500 Chicago statues and monuments with an eye toward identifying those that were offensive, problematic or not representative of city’s values of equity and justice.

Jennifer Scott, co-chair of the Monuments Project Advisory Committee, subsequently disclosed that 41 statues had been deemed problematic for one or more on a list of reasons, such as by presenting an inaccurate or demeaning portrayal of Native Americans or celebrating people with connections to slavery, genocide or racist acts.

Besides five statues of Lincoln, others on the list include the General John Logan Monument in Grant Park; the General Philip Henry Sheridan Monument at Belmont and Lake Shore Drive; a statue of Benjamin Franklin in Lincoln Park; the Haymarket Riot Monument/ Police Memorial at 1300 W. Jackson Blvd; the Italo Balbo Monument in Burnham Park; and the Jean Baptiste Beaubien plaque at the Chicago Cultural Center.