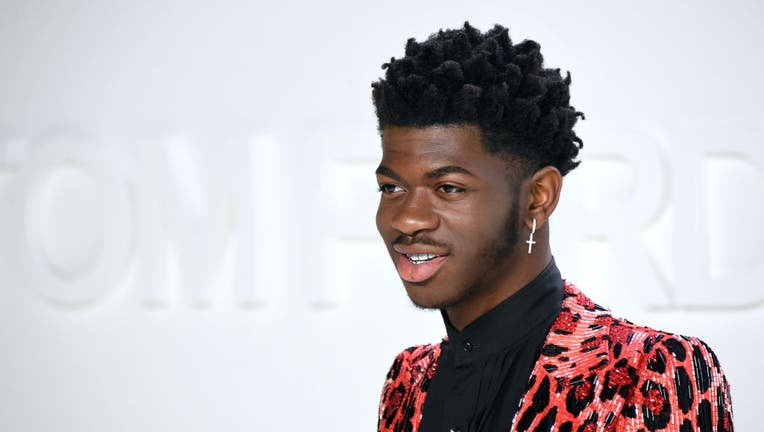 Lil Nas X is sparring with critics of his latest song and the subsequent shoe line that accompanied it, including South Dakota Governor Kristi Noem.

The rapper released his controversial new song "MONTERO (Call Me By Your Name)" last week and quickly caught people’s attention for the music video that sees him dressed provocatively, pole dancing and giving Satan a lap dance in Hell.

It didn’t take long before many were voicing their displeasure with the rapper’s sexually explicit and religiously controversial video, prompting him to take to Twitter and pull no punches in his response.

"y’all love saying we going to hell but get upset when i actually go there lmao," he wrote in response to the backlash on Friday.

Responding to one critic, Lil Nas X, 21, highlighted the renewed attention placed on mass shootings and gun violence in America to accuse people of selective outrage.

"there is a mass shooting every week that our government does nothing to stop. me sliding down a cgi pole isn’t what’s destroying society," he explained.

He later added: "y’all saying a gay ni--- twerking on a cgi satan is the end of times like slavery and the holocaust didn’t happen."

One user noted that his previous hit track, "Old Town Road," was marketed by a "system" for children that is now pushing "MONTERO," which the artist took issue with.

"there was no system involved. i made the decision to create the music video. i am an adult. i am not gonna spend my entire career trying to cater to your children. that is your job," he responded.

The star went on to explain that he doesn’t plan to apologize for the song.

"i spent my entire teenage years hating myself because of the sh-- y’all preached would happen to me because i was gay," he wrote. "so i hope u are mad, stay mad, feel the same anger you teach us to have towards ourselves."

Despite making it clear he does not feel bad about the release of the song, or the subsequent partnership with MSCHF to sell an exclusive Satan-themed sneaker decorated with a pentagram, inverted cross and a drop of real human blood, the rapper posted a YouTube video on Sunday titled "Lil Nas X Apologizes for Satan Shoe."

However, the video is a fake-out that plays a clip of the lap dance scene from the video.

One person who was not amused by the fake-out nor the shoe was Gov. Noem, who took to Twitter to rebuke the morality of marketing such footwear to children.

"Our kids are being told that this kind of product is, not only okay, it's ‘exclusive.’ But do you know what's more exclusive? Their God-given eternal soul," she wrote Sunday. "We are in a fight for the soul of our nation. We need to fight hard. And we need to fight smart. We have to win."

The artist responded by writing, "ur a whole governor and u on here tweeting about some damn shoes. do ur job!"

The governor then shot back with a bible quote that reads: "What good will it be for someone to gain the whole world, yet forfeit their soul? -Matthew 16:26."

Not to be outdone, Lil Nas X jabbed her with a lyric from his song.