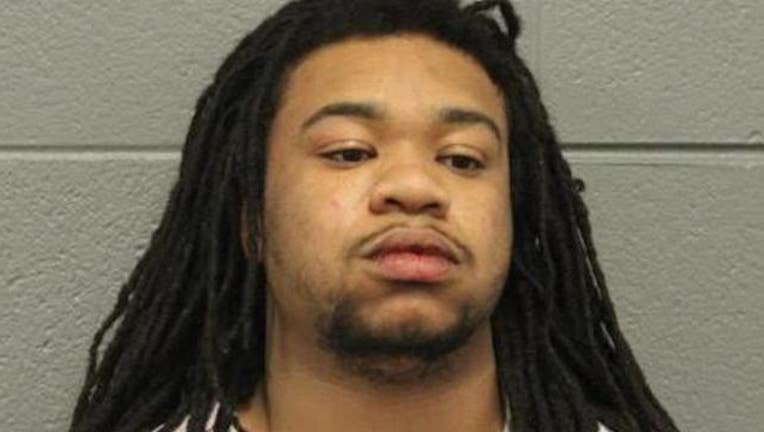 CHICAGO (Sun-Times Media Wire) - A man has been charged with injuring a Chicago Police officer while allegedly driving away from a West Garfield Park neighborhood traffic stop early Saturday on the West Side.

Officers saw 22-year-old Kerry Holoman commit a traffic violation at 1:35 a.m. in the 4400 block of West Lexington, according to Chicago Police. They pulled him over nearby in the 600 block of South Kostner.

During the stop, Holoman refused to provide his license or proof of insurance and drove onto a nearby sidewalk to get away, police said. In the process of driving away, he hit an officer and ran over his left foot before continuing onto westbound Interstate 290.

The officers pursued Holoman on I-290 until he crashed his vehicle into a light pole while trying to exit at 16th Avenue, according to police. He then got out of his vehicle and ran away on foot. He was taken into custody a short time later in the 1500 block of Harrison in west suburban Maywood.

The injured officer suffered swelling and bruising to his left foot and was taken to Rush University Medical Center, where he was treated and released, according to police.

Officers found a loaded handgun on Holoman upon his arrest, police said. He was taken to Loretto Hospital for any injuries he may have suffered in the crash but refused medical treatment.

Holoman, who lives in the Northwest Side Galewood neighborhood, was charged with one felony count each of aggravated battery to a peace officer; unlawful use of a weapon by a felon; aggravated fleeing disregarding two or more traffic devices; and criminal damage to government property, police said. He was also charged with one misdemeanor count each of damage to a highway, leaving the scene of an accident and operating an uninsured motor vehicle.

He was also issued traffic citations for failure to stop at a stop sign; failure to carry or display a driver’s license; transporting or carrying open alcohol; driving on a sidewalk or parkway; disobeying a red light; failure to keep in lanes; and failure to reduce speed to avoid an accident, police said.

Holoman was ordered held on a $100,000 bond in court Saturday, according to the Cook County sheriff’s office. He is next scheduled to appear in court Friday.