"Happy Father’s Day," read one message on the black poster board. "RIP Gyo," read another.

The sign was taped to a pole just feet from where Gyovanny Arzuaga was shot to death and his girlfriend — the mother of their two children — was critically wounded during the Puerto Rican Day Parade in Humboldt Park Saturday night.

Arzuaga, who had just turned 24, and the woman, 25, were ambushed by up to three people around 9:15 p.m. in the 3200 block of West Division Street, according to Chicago police.

Arzuaga was taken to Saints Mary and Elizabeth Medical Center, where he was pronounced dead, police said. The woman was hit in the neck and taken to Stroger Hospital in critical condition. 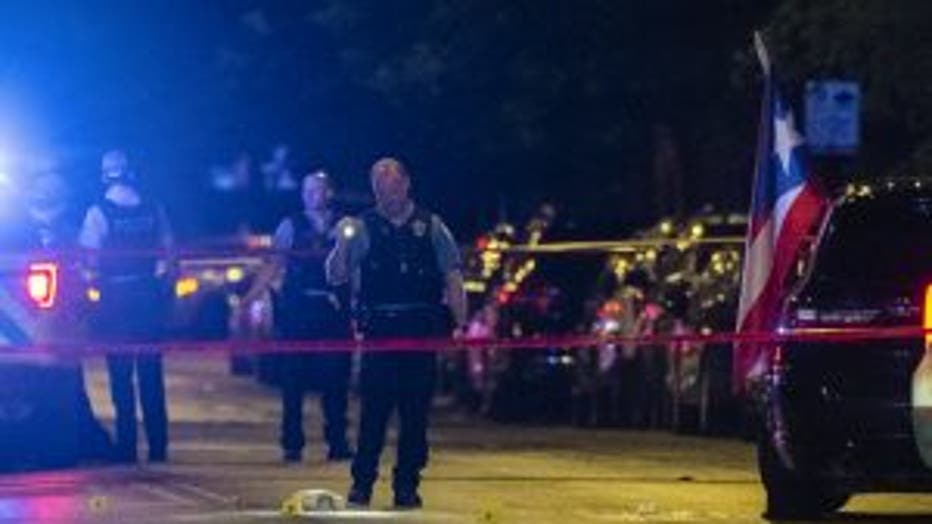 Chicago police work the scene where 2 people were shot including a 24-year-old man who was shot and killed, in the 3200 West Division St. in the Humboldt Park neighborhood, Saturday, June 19, 2021. | Tyler LaRiviere/Sun-Times

A police spokeswoman said there was a crash before the shooting and a crowd had surrounded the couple’s car. Video circulated on social media appears to show the couple being dragged from the car and shot as they lay in the street.

Police would not comment on the video Monday morning. No one was reported in custody, and no descriptions or images of the attackers were released.

A memorial was erected Sunday near the site of the shooting. Loved ones lit candles and left balloons and bouquets of flowers for Arzuaga.

"He was just there to have a good time and go back home," said his friend, Jae Pacheco, who had planned to meet up with him later in the evening.

Arzuaga was remembered Sunday as a family man who was funny and full of life.

"I was honestly blessed to have a friend like Gyovanny," Pacheco said. "The last thing I told him on his birthday was, ‘God bless you with so many more because this world definitely needs people like you.’ "

Before the parade, police had shut down some of the streets surrounding Humboldt Park, creating traffic jams, witnesses said.

Last week, Ald. Roberto Maldonado (26th) complained in a Facebook post about the police district’s "drastic" decision to close Luis Munoz Marin Drive, a street near the annual parade, in an attempt to prevent violence.

But a police spokesperson said Sunday the inner drive of the park has never been opened to vehicular traffic during the parade. Maldonado didn’t respond to requests for comment Sunday.