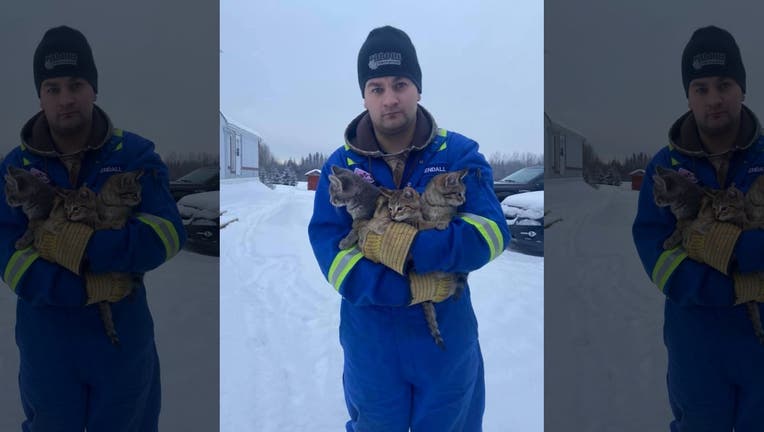 FOX NEWS - Three little "pawpsicles" were rescued last week in Canada by a quick-thinking man who used his coffee to thaw them out.

On Wednesday morning, oilpatch worker Kendall Diwisch of Alberta, heard the tiny cries of three kittens in the snow.

In a video shared on Facebook, which has since gone viral, Diwisch records himself approaching the cats and discovering their tails were frozen to the ice. The fast-acting man then goes to his car and grabs a still-warm coffee to use to free the kittens from the ice.

“So today I found these three fellows on one of the back roads near one of my wells. Most likely dropped off. Poor things were frozen into the ice so they had to have been there all night. Took them home fed and watered them they look to be healthy and friendly,” Diwisch wrote on Facebook.

Diwisch reportedly took the kittens to a local rescue group to have them dewormed.

Fortunately, the kittens’ story does not end there. Soon after he posted the likely life-saving video, Diwisch reported an update that all three of the kittens were adopted by the same home and are thriving.

“All three little rascals went to their new home today where they get to be together instead of separating them. All three are eating and drinking and very energetic. Thanks for everyone’s consideration and offering to take them very appreciated," he said.

Alberta SPCA shared with CTV News that the animal shelter does not have a current investigation into what appears to be animal abandonment, citing the “over-population of cats” in the Canadian province as a cause for the “disposal.”

"This incident should serve as a reminder to everyone about the importance of getting pets spayed or neutered," said spokesman Dan Kobe.

Those found guilty of animal abandonment can face a fine of up to $20,000 as well as a lifetime ban on owning animals.