A frantic search continued Friday for dozens of people still unaccounted for after a beachfront condo building partially collapsed outside of Miami, Florida, killing at least four people and leaving more than 150 others unaccounted for.

LAKE MARY, Fla. - A frantic search continued Friday for dozens of people still unaccounted for after a beachfront condo building partially collapsed outside of Miami, Florida, killing at least four people and leaving more than 150 others unaccounted for.

Rescue personnel and others worked through the night in hopes of finding survivors.

FEMA officials are now on-site to help with the recovery efforts. A website has been set up to help the people involved in the tragedy. If you would like to donate, visit supportsurfside.org.

Search and rescue efforts continued Friday morning in South Florida after a 12-story condo partially collapsed on Thursday, killing at least two people. Officials are expected to give an update on the rescue efforts on Friday.

Hours after the collapse, searchers were trying to reach a trapped child whose parents were believed to be dead. In another case, rescuers saved a mother and child, but the woman’s leg had to be amputated to remove her from the rubble, Frank Rollason, director of Miami-Dade emergency management, told the Miami Herald.

DeSantis, who toured the scene on Thursday and was scheduled to return Friday, said television did not capture the scale of what happened.

Rescue crews are "doing everything they can to save lives. That is ongoing, and they’re not going to rest," DeSantis said.

Teams were trying to enter the building from the basement parking garage at the Champlain Towers. The Miami-Dade Fire Rescue shared a video on Twitter of rescuers standing in knee-high water using a power drill to break through a wall.

Gov. DeSantis also made remarks on Friday, saying he is working very closely with the mayor and the federal government as needs arise.

"We feel like we have all hands on deck to be able to assist with the search and rescue mission and then obviously help people who have been displaced and then help the families who still have loved ones who are unaccounted for," DeSantis said.

DeSantis noted that he is in agreement with the mayor on the need for a definitive explanation for how the catastrophic collapse could have happened.

He acknowledged that others in the state and across the country will want answers on how a building could "just collapse like that."

"I think it’s a really important thing," the governor said.

DeSantis said he spoke with the Biden administration and appreciates their support and the community’s support, "stepping up to help people who are in need."

He called the incident a "unique type of tragedy" and one that has been "gut-wrenching" for many people.

Florida Gov. Ron Desantis made remarks on Friday, stating he is working very closely with the mayor and the federal government as needs arise, after a condo collapse in Surfside near Miami on June 24.

"Firefighters continue working on locating possible victims while dealing with heavy damage and changing conditions in the parking garage," the Miami-Dade Fire Rescue wrote on Twitter.

The Miami-Dade mayor added that the search and rescue teams were facing an "extreme risk" amid the unstable conditions at the scene. Crews were searching the rubble from both above and below.

About half of the building’s roughly 130 units were affected, Cava told a news conference. Rescuers had pulled at least 35 people from the rubble on Thursday, and heavy equipment was being brought in to help stabilize the structure to provide more access, Raide Jadallah of Miami-Dade Fire and Rescue said.

The tower has a mix of seasonal and year-round residents, and while the building keeps a log of guests, it does not keep track of when owners are in residence, local officials said.

Surfside Mayor Charles Burkett warned that the death toll was likely to rise, saying the building manager told him the tower was quite full at the time of the collapse.

Barry Cohen and his wife, who live in the condo, said they were asleep when they were awakened by a loud boom.

Personal belongings were evidence of shattered lives amid the wreckage of the Champlain, which was built in 1981. Many were moved by a children's bunk bed perched precariously on a top floor, bent but intact and apparently inches from falling into the rubble.

"Somebody was probably sleeping in it," Jimmy Patronis, the state’s fire marshal, told reporters. "There’s all those what-ifs."

BREAKING NEWS ALERTS: Download the FOX 35 news app for breaking news as it happens and more

Roof work was reportedly being done at the condo but it is still unclear if that is connected to the collapse.

"But there is roof work being done all the time," Mayor Burkett said. "It looks like a bomb went off. Buildings don’t just fall down like this. We just don’t have any answers right now but we’ll find them. We’ll get them."

MORE NEWS: Download the FOX 35 news app for breaking news as it happens and more

He added, "There’s no reason for a building like this to go down like this. It just went down."

Gov. DeSantis speaks with officials after partial collapse of condo near Miami Beach

Governor DeSantis speaks in Surfside and officials give another update on the scene of a partial collapse of a condo near Miami Beach.

PHOTOS AND VIDEOS FROM THE SCENE 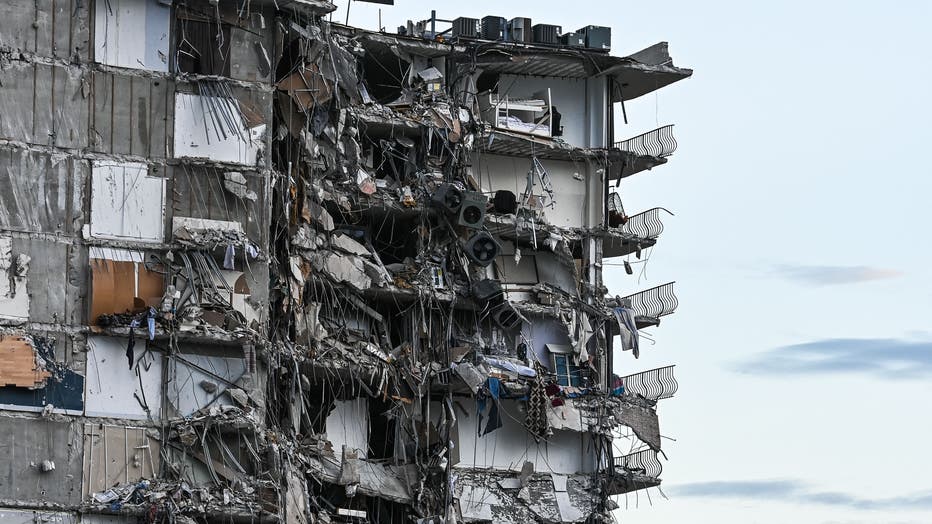 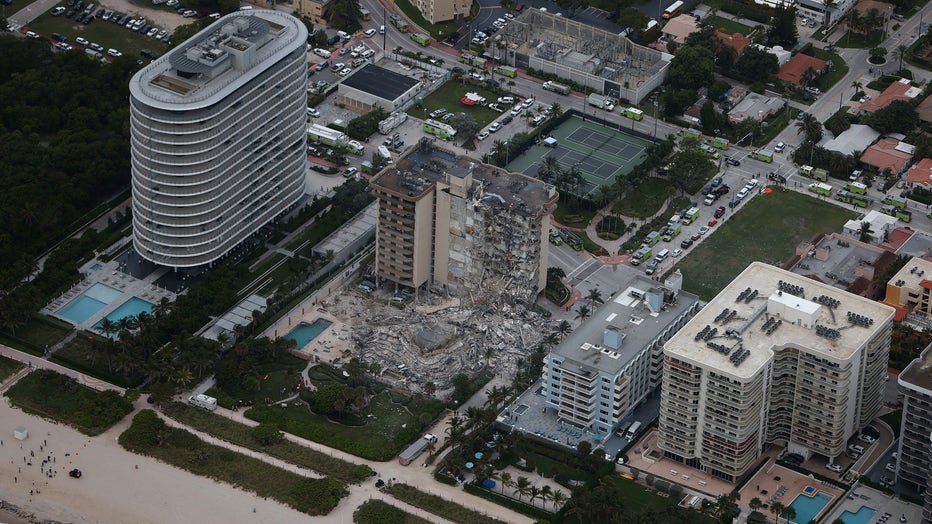 SURFSIDE, FLORIDA - JUNE 24: Search and rescue personnel work in the rubble of the 12-story condo tower that partially collapsed on June 24, 2021 in Surfside, Florida. It is unknown at this time how many people were injured as search-and-rescue effor 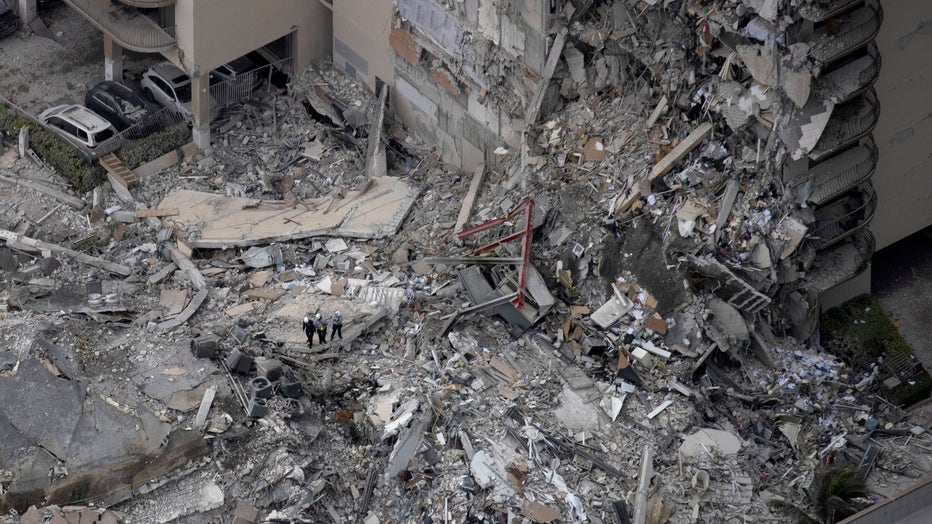 SURFSIDE, FLORIDA - JUNE 24: Search and rescue personnel with a K9 unit work in the rubble of a 12-story residential tower that partially collapsed on June 24, 2021 in Surfside, Florida. It is unknown at this time how many people were injured as sear 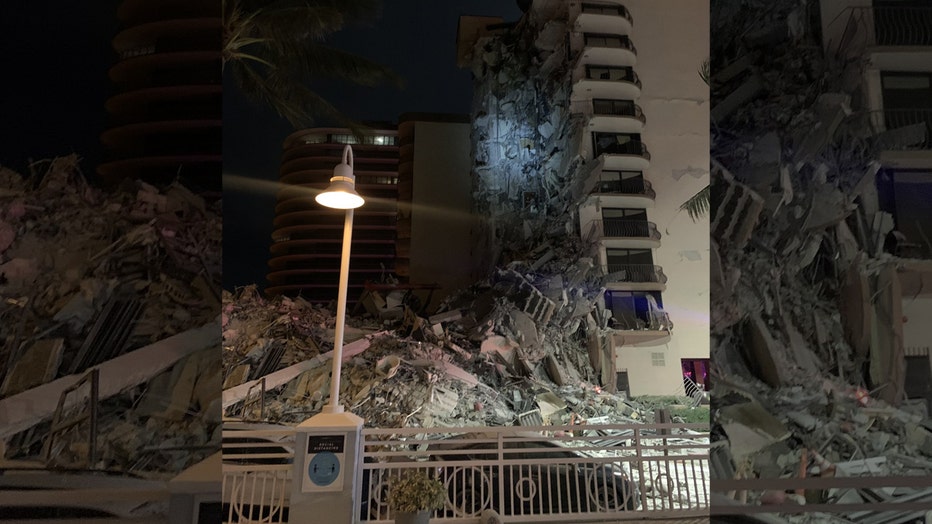 About half of the building's roughly 130 units were affected, according to officials.  Authorities did not say what may have caused the collapse.

The Associated Press, FOX News, and FOX 13 Tampa Bay contributed to this report.