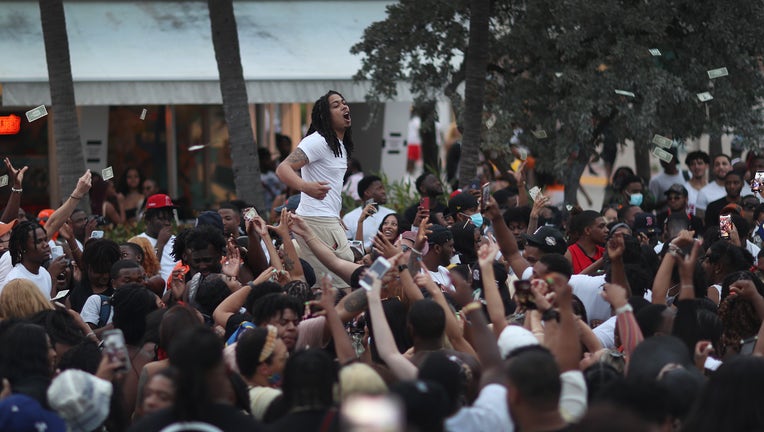 People enjoy themselves along Ocean Drive on March 19, 2021 in Miami Beach, Florida. College students have arrived in the South Florida area for the annual spring break ritual. (Photo by Joe Raedle/Getty Images)

MIAMI - Miami Beach's commissioners will hold an emergency meeting Sunday to determine whether to extend an unusual 8 p.m. curfew aimed at curtailing spring break crowds that got so out of hand that authorities had to call in SWAT teams.

Officers in bulletproof vests dispersed pepper spray balls Saturday to break up groups that descended on sunny South Beach by the thousands, trashing restaurants and flooding the streets without masks or social distancing despite COVID-19 restrictions.

After days of partying, including several confrontations between police and large crowds, Miami Beach officials had enough and ordered an emergency curfew from 8 p.m. til 6 a.m., forcing restaurants to stop outdoor seating entirely during the three-day emergency period, and encouraging local businesses to voluntarily shut down.

A military style vehicle was seen rolling down the palm-tree lined Ocean Drive on social media as outnumbered Miami Beach police officers struggled to disperse the raucous crowds Saturday. Tourists were urged to stay inside their hotels and pedestrians or vehicles were not allowed to enter the restricted area after 8 p.m.

The emergency order caused confusion, and defiance, in some cases. It was announced at 4 p.m., just four hours before it was to go into effect. Videos flooded social media during that time as rebellious - but largely nonviolent - crowds refused to disperse. Some people responded by jumping on top of cars, twerking and throwing money into the air.

"Our city in this area has become a tinder," Miami Beach Mayor Dan Gelber said at a press conference Saturday. "And we can't have a policy of simply hoping it's not lit."

The curfew comes as the iconic bar, the Clevelander South Beach, announced it was temporarily suspending all food and beverage operations until at least March 24 after crowds crammed Ocean Drive, breaking out into street fights. At another restaurant next door, tables and chairs were smashed during a fight, news outlets reported.

Local officials and businesses have struggled to balance courting tourists to boost the economy while doing so safely amid the ongoing coronavirus pandemic.

At the same time, local officials banned alcohol from the beach, along with all alcohol sales after 10 p.m. in an effort to curb partying. The city even sent cellphone text messages to tourists warning, "Vacation Responsibly or Be Arrested."

"Spring break in Miami Beach may be one of the great rites of passage, but only if you plan on following the rules. Otherwise, you might as well just stay home and save yourself the court costs," the message read.

But local officials have struggled to enforce COVID ordinances. Under Republican Gov. Ron DeSantis' pro-business stance, Florida has no statewide mask rules, limits on capacity or other such restrictions.