STURGIS, Mich. - A Michigan judge has canceled the bond for a man charged with assaulting his girlfriend after the court discovered both the defendant and the alleged victim were at the same address. 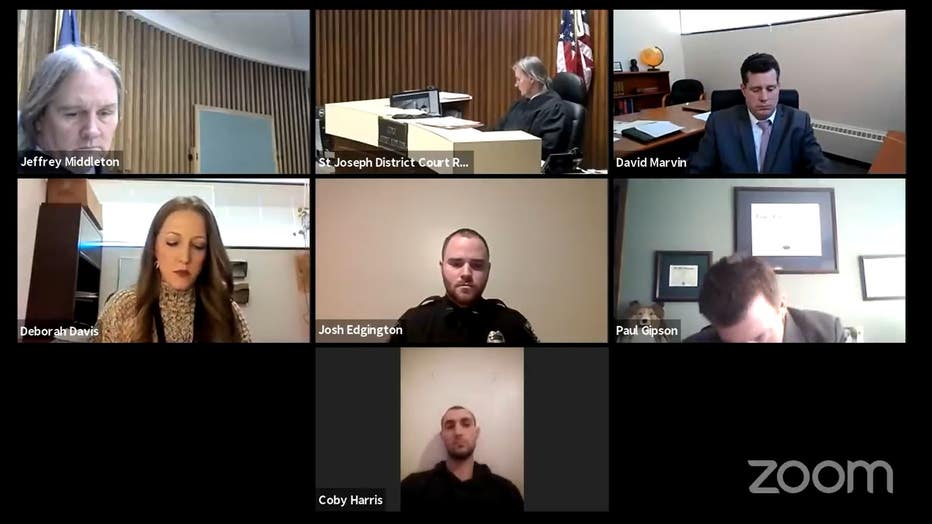 "This is an issue we didn't have when we had live court," said Judge Jeffrey Middleton. "This is the first time to my knowledge if he is in the same venue this has occurred."

A prosecuting attorney first raised concerns about the victim's safety after seeing movements between the two parties that made it appear like they were interacting.

Coby James Harris, 21, had been accused of assault with intent to commit bodily harm after he allegedly beat up his girlfriend in Sturgis, located near Michigan's southern border with Indiana in St. Joseph County. During a March 2nd Zoom call obtained by Storyful, a judge listening to the cross-examination between the prosecutor and the victim canceled all proceedings after their suspicions were confirmed.

"Your honor, I have reason to believe that the defendant is in the same apartment as the complaining witness right now and I'm extremely scared for her safety," Davis says around 7 minutes into the court proceeding.

"The fact she's looking off to the side and he's moving around, I want some confirmation that she is safe before we continue."

The judge asked both the victim and Harris where they were and both gave separate addresses. The victim said they were on Hatch Street while he said he was on Lafayette.

When police arrived, the victim was asked by the judge to meet them at the door. The victim agrees and does so. Shortly after, both their screen and Harris's screen turn off. When they turn back on, Harris is being placed in handcuffs and has a cigarette in his mouth.

"Your honor, (the victim) and I both don't want no contact. I asked they be dropped. I'm sorry I lied to you. I knew the cops were outside, I don't know why I lied," Harris said.

"Mr. Harris, my advice is don't say anything else, take the cigarette out of your mouth," responded Judge Middleton. "The hearing is adjourned, your bond is canceled."

The judge said it was the first time ever he'd been in a situation where a witness was potentially being intimidated during a hearing.

The original felony charge that Harris was up against came with a maximum 10-year prison penalty and a $5,000 fine. However, he could face additional charges.