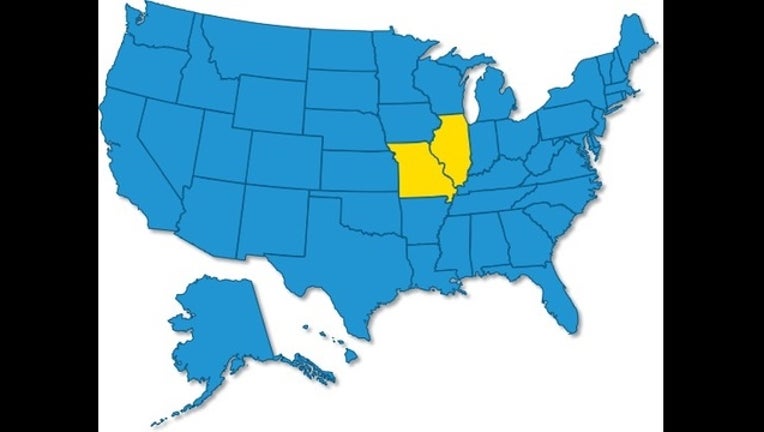 O'FALLON, Ill. (AP) — The two-state battle for a federal spy agency's new regional headquarters is heating up, with Missouri Gov. Jay Nixon on Wednesday announcing plans to publicly push to keep the agency in St. Louis as hundreds of supporters gathered across the Mississippi River to tout a potential Illinois location.

At stake in the bistate regional fight are more than 3,000 high-tech jobs at the National Geospatial-Intelligence Agency paying an average of $75,000.

The defense and intelligence agency, a combat support branch of the Department of Defense, is considering four sites to replace its current location near the Anheuser-Busch brewery south of downtown St. Louis.

Two of the four sites are in south St. Louis County. But most expect the choice to boil down to either a location on the north side of St. Louis or one roughly 20 miles east of the Gateway Arch in southwestern Illinois.

Civic boosters in Illinois call the 182-acre tract near MidAmerica Airport the clear choice. They cite its proximity to Scott Air Force Base and St. Clair County's offer to donate the land. There's also a new cyber-security research center that's teamed up with several local universities to train future workers.

And while St. Louis estimates it would lose more than $2 million annually in earnings taxes paid by those work in the city — regardless of where they live — those touting the Illinois location note the extra take-home pay workers will receive.

"It makes perfect sense," said Debbie Arell-Martinez, executive director of the O'Fallon-Shiloh Chamber of Commerce. "Their main customers are on Scott Air Force Base. Why not be as close to your customers as possible? And the land is free."

Alan Dunston, board chairman in Madison County ,Illinois, called the $1.6 million NGA Next West effort "a good project for the whole region" while also acknowledging that "everybody wants it."

"If you make a logical decision, and take the politics out, this is the site to choose," he said. "This should be an easy decision. If this was a business decision, it would already be made."

While the St. Clair site is primarily fallow farmland, the north St. Louis location favored by Nixon would require the city to use eminent domain on hundreds of properties in a densely-packed part of the city where an ambitious redevelopment project has stalled, raising the prospect of forced sales and relocations of those who don't wish to move.

Some current NGA employees have also expressed concerns about their safety in that location, according to a draft environmental impact statement released earlier this month.

The preliminary report by the U.S. Army Corps of Engineers, which is tasked only with assessing the environmental impact, didn't select a preferred site among the four finalists. That choice will be announced in March, although an agency spokesman said Wednesday that the NGA director could identify a preferred location sooner.

The final of three public meetings on the project is planned for Thursday afternoon in St. Louis. On Wednesday, as more than 200 people packed an O'Fallon, Illinois community center for a brief presentation and to submit written comments on the project, Nixon's office said that the Democratic governor and unidentified St. Louis-area elected officials will hold a news conference before the NGA open house "regarding the importance of keeping NGA-West in St. Louis."

Nixon and the other elected leaders will be briefed privately on the project beforehand. A similar briefing for their Illinois counterparts took place before the Wednesday session.