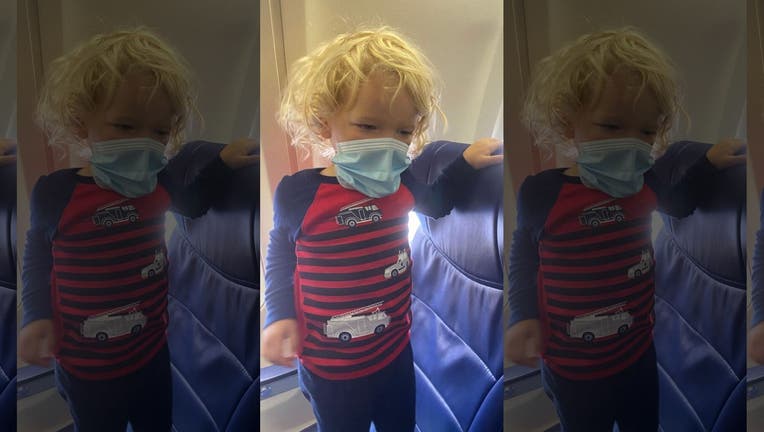 While waiting for departure, Jodi said she let her son have a snack to help relieve the pressure in his ears when the plane takes off. (Photo credit: Jodi)

A mother says she was "humiliated" when she was escorted off a Southwest flight Saturday because her 2-year-old was snacking without a mask prior to takeoff.

It was a situation 34-year-old Jodi, who requested her last name not be used, never thought she would be in when traveling back to Chicago from a family trip in Florida on Saturday.

"I would have never expected this would have been a situation that Southwest had put me in," Jodi told Fox News. "I felt so alone, so unsupported and so humiliated."

While waiting for departure, Jodi said she let her son have a snack to help relieve the pressure in his ears when the plane takes off. Even though he was eating and had his mask wrapped around his ears, she said she was repeatedly confronted by flight attendants who told her that her son needed to be masked.

Jodi said she made numerous attempts to pull up the mask, but her son would push it back down to take another bite of his gummies. She recalled assuring the flight attendants that her son would wear it for the entire flight when he was done eating.

Her efforts weren't enough, she said.

By the time she was confronted by the manager and supervisor, she says her son had been voluntarily wearing his face mask without an issue for some time. However, she was still asked to deplane.

"I knew in that moment that they knew we were doing the right thing and following protocol, but because they already made the other passengers wait, they still asked us to leave," she said.

Jodi said a flight attendant told her that parents have been using eating and drinking as an excuse not to put face masks on their children.

She said that "certainly was not the case" in her circumstance.

"We believe in face masks," she said. "I believe this will help slow the spread of COVID-19. This was totally circumstantial, he was eating, he was 2 years old."

She noted that anyone with a toddler knows how difficult it is to teach them to wear a mask.

Not only is it "a concept they don't understand," but Jodi said, like anything at that age, "it's an action that needs to be repeated over and over again -- consistency is everything."

Per Southwest's policy, which aligns with CDC guidelines, any customer 2 years and older is required to wear "a well-secured cloth or mask" that covers their nose and mouth while traveling to help prevent the transmission of COVID-19.

However, a week earlier, when the two were flying down to Naples, Fla., to visit family, Jodi said the flight attendants were more understanding.

"I let them know we were working on it and would do the best we could," she said.

On Saturday, she recalled being surprised when the plane returned to the gate.

Before leaving, Jodi said she sat him on the seat to show passengers that they were complying with the rules.

"I wanted the full plane to witness that he was in fact wearing it, so he stood up on the seat with it on for everyone to see before we left," she said.

Jodi said the airline offered her to take another flight later that day but there were no flights direct to Chicago until Monday. Instead, she booked a $600 flight on American Airlines. A spokesperson for Southwest told Fox News in a statement that it communicates its mask policy to all of its customers "at multiple touchpoints throughout the travel journey."

"If a customer is unable to wear a face covering for any reason, Southwest regrets that we are unable to transport the individual," the airline said. "In those cases, we will issue a full refund and hope to welcome the Customer onboard in the future, if public health guidance regarding face coverings changes."

The airline said it is looking into the situation to "learn more about what may have occurred" and will reach out to the mother.

As of Monday, however, she said has not heard from the airline but plans to reach out to officials regarding the incident.