A California mom decided to prank her kids with frozen cereal and juice as an early April Fool's Day joke.

SPRING VALLEY, Calif. - A California mom served her kids frozen cereal and orange juice as an April Fools’ Day prank, and their reactions were priceless.

Morgan Brianna Pepiton shared video of the prank on March 31.

"So tomorrow is March 31. My kids will not be with me. They’ll be with their dad on April Fools’ Day, the morning of, at least. So, I’m going to do their April Fools’ Day prank tomorrow morning when they least expect it," Pepiton says in the video.

The video shows Pepiton prepping her kids’ breakfasts, comprised of Cap’n Crunch cereal and a cup of orange juice. 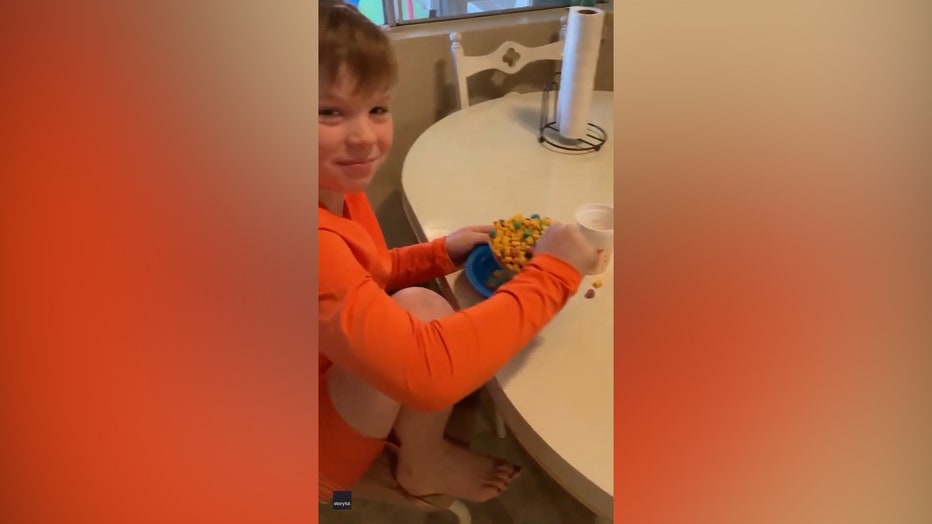 "We’re putting these bad boys in the freezer," Pepiton continues as she places both cereal bowls — with spoons — inside her freezer.

"To make it extra fun, I’m going to throw in some frozen juice," Pepiton added.

The video then cuts to the morning after, and suffice it to say, Pepiton’s kids were bemused by their mom’s unexpected prank.

Pepiton’s son can be heard grunting as he attempts to lift his spoon from his frozen cereal as her daughter is heard exclaiming, "Come on!"

"Why does it have to be April Fools’ Day?" Pepiton’s daughter asked. "And this is frozen too," her daughter adds as she pokes at her frozen orange juice.

Pepiton’s son is seen chuckling as he attempts to drink his frozen juice as her daughter asks once more, "Does it have to be April Fools’ Day? Come on!"

This is the second year in a row Pepiton performed the prank on her kids.

Storyful contributed to this story.