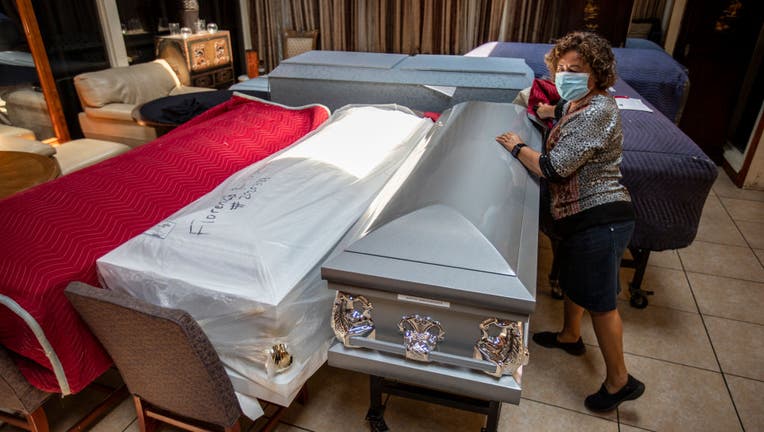 The United States has reached another sobering milestone as COVID-19 deaths top 200,000, according to data collected by Johns Hopkins University.

As the U.S. braces for the upcoming flu season, the fight against COVID-19 continues with conflicting guidance from the Centers for Disease Control and Prevention.

President Donald Trump said that a potential coronavirus vaccine could be widely distributed by the end of 2020, contradicting congressional testimony earlier Wednesday.

The U.S. Centers for Disease Control and Prevention said Monday that it mistakenly posted guidance saying the novel coronavirus can be transmitted by tiny particles that linger in the air, and the agency pulled the updated information from its website.

"A draft version of proposed changes to these recommendations was posted in error to the agency’s official website,” the CDC said in an email. “CDC is currently updating its recommendations regarding airborne transmission of SARS-CoV-2 (the virus that causes COVID-19).”

RELATED: Airborne COVID-19: What does it mean, how does it increase risk and what are the steps to stay safe?

“Once this process has been completed, the update language will be posted,” the statement added.

The CDC guidance has maintained that inhalation of respiratory droplets or small particles when an infected person coughs, sneezes or talks is thought to be the main way the virus spreads. Particularly between people who are in close contact with one another — about 6 feet.

Last week, it added information about tiny particles in the air that can be inhaled by others.

“It is possible that COVID-19 may spread through the droplets and airborne particles that are formed when a person who has COVID-19 coughs, sneezes, sings, talks, or breathes,” the CDC language stated, which has since been removed. “There is growing evidence that droplets and airborne particles can remain suspended in the air and be breathed in by others, and travel distances beyond 6 feet (for example, during choir practice, in restaurants, or in fitness classes). In general, indoor environments without good ventilation increase this risk.”

The abrupt reversal comes amid scientific evidence suggesting that these tiny virus particles can linger in the air and infect people as they inhale. In July, more than 200 scientists from a variety of fields contributed to an open letter calling on the World Health Organization to acknowledge that the coronavirus can spread through the air and urging the global body to update its official guidance on the subject.

The scientists wrote that studies have shown “beyond any reasonable doubt that viruses are released during exhalation, talking and coughing in micro-droplets small enough to remain aloft in the air.”

U.S. health officials reversed a controversial piece of coronavirus guidance on Friday and said anyone who has been in close contact with an infected person should get tested.

The CDC essentially returned to its previous testing guidance, getting rid of language posted last month that said people didn’t need to get tested if they didn't feel sick. That change had set off criticism from health experts who couldn't fathom why the nation's top public health agency would say such a thing amid the pandemic.

It was "not consistent with the basic principles of controlling an epidemic,” said Dr. Silvia Chiang, a pediatric infectious diseases expert at Brown University who applauded the reversion announced Friday.

The CDC now says anyone who has been within 6 feet of an infected person for at least 15 minutes should get a test. In a statement, the agency called the changes a “clarification” that was needed “due to the significance of asymptomatic and pre-symptomatic transmission.”

Health officials were evasive about why they had made the change in August, and some outside observers speculated it was forced on the CDC by political appointees within the Trump administration.

Dr. Richard Besser, chief executive of the Robert Wood Johnson Foundation, said he believes the August change was made to give “wiggle room” to governors who did not want to increase testing.

Besser said it makes it harder for the public to understand why the CDC is making recommendations and whether that advice can be trusted. Besser previously spent 13 years at CDC and was acting director at the beginning of a 2009 flu pandemic.

The CDC and Food and Drug Administration have to be seen as reliable sources of science information as the administration gears up for a national coronavirus vaccination campaign, Besser said.

"If we can't believe that, then even if there is a safe and effective vaccine, a significant portion of the population will not want to get it," he said.

There’s no guarantee the Northern Hemisphere will avoid twin epidemics as its own flu season looms while the coronavirus still rages.

In light of the doubly grim news, health officials are urging people to get their flu shots this year.