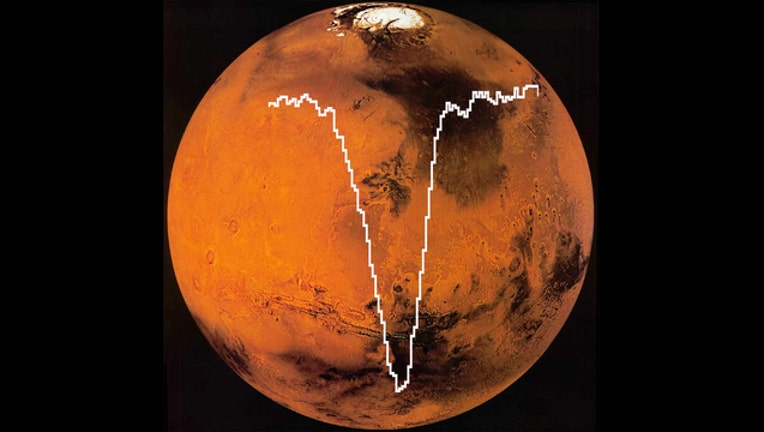 SOFIA/GREAT spectrum of oxygen [O I] superimposed on an image of Mars from the MAVEN mission. (NASA)

FOX NEWS - A specially-equipped 747 has detected atomic oxygen in Mars’ upper atmosphere, NASA reported, marking the first time that the space agency has made that observation in four decades. The California-based NASA plane that made the measurements is called the Stratospheric Observatory for Infrared Astronomy, or SOFIA. NASA reports that using an instrument on board the plane, they found the atomic oxygen in the planet’s mesosphere, which is its upper atmosphere— but only saw about half of what they thought they would.

"Atomic oxygen in the Martian atmosphere is notoriously difficult to measure," Pamela Marcum, a project scientist with SOFIA, said in a statement. "To observe the far-infrared wavelengths needed to detect atomic oxygen, researchers must be above the majority of Earth’s atmosphere and use highly sensitive instruments, in this case a spectrometer. SOFIA provides both capabilities."

The SOFIA airplane that made the measurements of Mars conducts its research while flying at an altitude of between 37,000 and 45,000 feet. On Earth, two oxygen atoms join together to form O2, which is what we breathe. Atomic oxygen, however, is just a single oxygen atom. When atomic oxygen was last detected in the atmosphere of the red planet, it was because of the Viking and Mariner missions.

“Atomic oxygen affects how other gases escape Mars and therefore has a significant impact on the planet’s atmosphere,” NASA said.