CHICAGO - Bob Barnes, the man who is bicycling to all 50 U.S. state capitals in one year, had a face-off with an aggressive dog within days of reaching the state of Illinois.

Barnes, 52, of Syracuse, N.Y., visited his capital no. 39, Springfield, on May 3. Along his cross-country journey, which began in summer of 2021, Barnes has had a few close calls and some dangerous experiences; his tent even caught fire amid his Michigan trip.

Barnes has also been chased by animals — including a loose bull in Kentucky — but the adventure in Illinois was the first time he was bitten by an animal on his trip.

Barnes was cycling through a rural area of Illinois when the dog — a mixed breed, with a yellow coat and a beefy build, he said — came after him.

Barnes carries pepper spray with him so that he's prepared for any animals that come after him while he’s cycling.

Barnes, however, missed his first try at spraying the dog in Illinois. That’s when the dog bit Barnes on his left buttock.

The dog kept following him, but Barnes used his pepper spray during the dog's second and third approach.

"I got him good, and he went back home," Barnes said matter-of-factly.

"I was very calm because I’ve done it a bunch of times," he added about fending off aggressive dogs. "I wanted to make sure I didn’t crash while I was looking at him and getting ready to pepper-spray him."

Barnes wasn't injured, however — and the incident didn't slow him down.

"It didn't rattle me," Barnes said. "I'm actually starting to think maybe that particular can of pepper spray isn't the strength it should be or something," he added.

The Illinois State Capitol dome in Springfield was one of this cyclist's favorites so far on his journey to all 50 capital cities.

"When you’re up on the second level, and you look up into that dome, you lose your breath," Barnes said. "It’s like looking down from a skyscraper, but you’re looking into the abyss. It’s really cool."

What Barnes especially loved about the Prairie State was riding along Route 66.

"It has so much character," Barnes said of the historic highway.

"It’s a road, but it’s a destination itself." 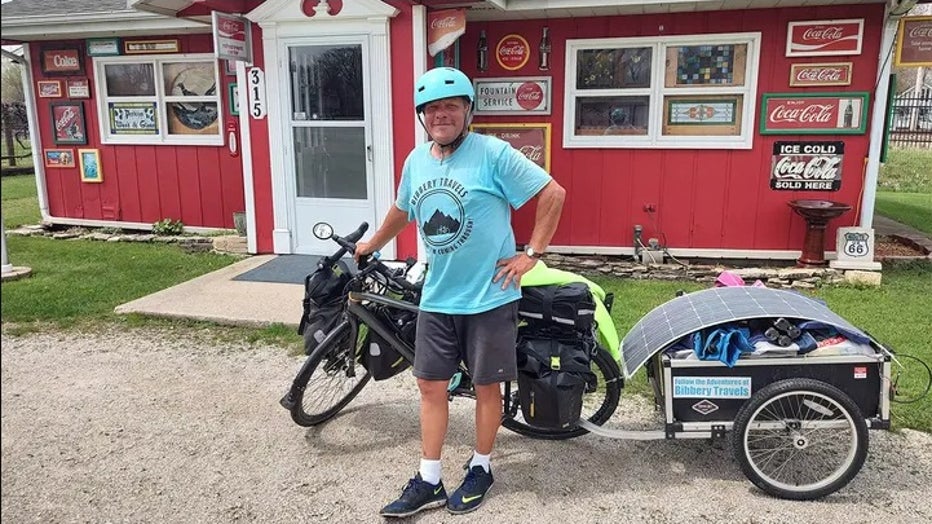 Barnes and his bicycle are pictured at Tom's shop on Route 66. (Bob Barnes)

While he was pedaling on Route 66, Barnes met a man named Tom who runs a shop on the highway.

"He welcomed me and told me about everything on Route 66, gave me some great literature on what to look for in each town, which was awesome," Barnes said.

He added that Tom exemplified the rest of Illinois.

One landmark along Route 66 that particularly stood out to Barnes was a filled-in subway, he said.

"Route 66 became so busy that they had to dig a tunnel underneath the road," Barnes said. "They called it the subway in this little town, for the kids to cross the street."

"And then, at one point, they filled it in because Route 66 went away," he added.

"It was so odd," Barnes said. "It was just there and it was huge — and it was like, ‘Just come look at me, because I’m a big Paul Bunyan eating a hot dog.’"

Barnes faced a couple of other challenges while in Illinois: the wind and a broken phone.

"I always feel like people are going to think I’m exaggerating when I try to explain the wind, but it’s outrageous," Barnes said. "It’s violent."

"It’s incredibly hard, physically demanding just to pedal into the wind," Barnes added, explaining that the wind has been the hardest part of his trip overall.

He said it was even more challenging than cycling uphill.

"It’s unbelievable how windy it can be."

One morning, right as he was heading out for the day, Barnes dropped his phone and cycled over it.

The broken phone wouldn’t turn on again, so Barnes had to find a Verizon store by asking people along the way.

"It didn’t demotivate me, but it did take a toll on my stress levels," Barnes said of the incident. "I don’t like to admit that I get stressed out, but that was a little difficult."

He was able to make it to the next Verizon store and get set up with a new phone.

"The phone itself is crucial," said Barnes, who has been documenting his trip and posting the adventures on Facebook.

After he left Illinois on May 6, Barnes arrived in Iowa for his 40th capital city: Des Moines.

Once he visits each capital of the Lower 48, Barnes explained that he plans to bike to Juneau, Alaska, after taking a ferry from Canada.

He'll later bike to Honolulu, Hawaii, after flying with his bike to the island.