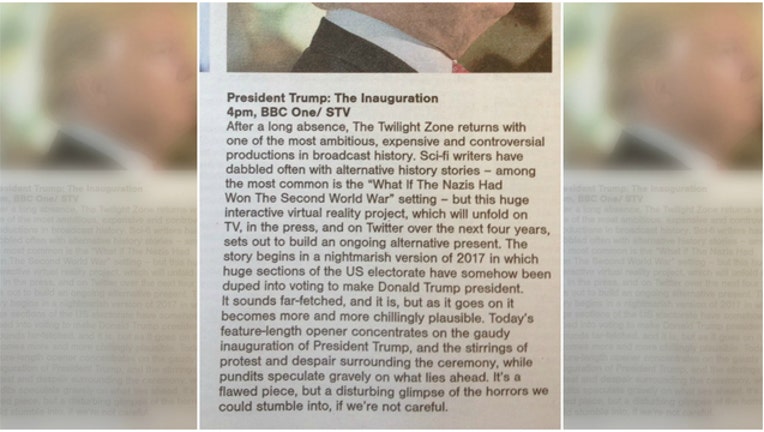 The Scottish Sunday Herald included a listing for Donald Trump's inauguration ceremony in its TV section, calling it the return of "The Twilight Zone."

"Sci-fi writers have dabbled often with alternative history stories - among the most common is the ‘What If The Nazis Had Won The Second World War’ setting - but this huge interactive virtual reality project, which will unfold on TV, in the press, and on Twitter over the next four years, sets out to build an ongoing alternative present," the listing said.

"The story begins in a nightmarish version of 2017 in which huge sections of the U.S. electorate have somehow been duped into voting to make Donald Trump president. It sounds far-fetched, and it is, but as it goes on it becomes more and more chillingly plausible,” the listing continues.

"Today's feature-length opener concentrates on the gaudy inauguration of President Trump, and the stirrings of protest and despair surrounding the ceremony... It’s a flawed piece, but a disturbing glimpse of the horrors we could stumble into, if we’re not careful," the listing warns.