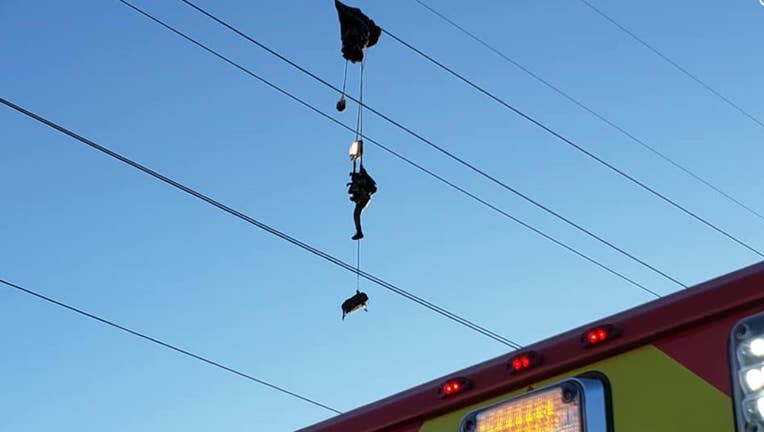 ARIZONA CITY, Ariz. - A military parachutist who dropped onto high-voltage power lines in southern Arizona had to dangle for several hours before he could be safely rescued by firefighters and utility crews.

Firefighters arranged to have the lines de-energized before crews using a ladder truck could get near the parachutist and pull off the rescue Friday, Eloy Fire District Assistant Chief Robert Maestas said. He called the man "extremely lucky."

The jump went awry south of Arizona City near a small private airport that had been the planned landing point for the training jump. That area of southern Arizona is popular for parachute jumps, including training for military personnel.

The parachutist was making in the jump with other members of a small group of military personnel from a foreign country, Ian Mackenzie, military operations director for Airborne Support Group, an Arizona company that runs the drop zone, told The Associated Press on Saturday.

A statement issued by the fire district said crews had to carefully disentangle the parachutist from the power lines "as a quick release would have caused a slingshot effect on the power lines already under tension."

The man was taken to a hospital for evaluation, but he wasn't seriously injured, Maestas said. "He was awake and alert and extremely lucky."

The lines are owned by the Western Area Power Administration, which is run by the U.S. Department of Energy, the Casa Grande Dispatch reported.

Ald. Stephanie Coleman (16th) speaks with FOX 32 about Tony Taylor, the man who rescued a 7-year-old girl wandering the streets of Englewood.