Pediatrician killed by other doctor remembered by family, patients

A makeshift memorial has been made in front of Children’s Medical Group in Central Austin, where Dr. Dodson worked, and where she had been killed.

AUSTIN, Texas - Dr. Katherine Dodson is being remembered as a woman who radiated light, love, and joy. The community is in mourning after learning the pediatrician was killed in a hostage situation that lasted more than six hours.

"As a dedicated mom, wife, daughter, friend, and pediatrician, she radiated light, love, and joy in everything she did and with everyone she touched," her family said, in part, in a statement. "Our only comfort is knowing she is now with Jesus and all the heavenly saints who are undoubtedly already looking forward to her first costume party."

"Dr. Dodson was a light. An absolute shining light. She walked into the exam room with a broad but sympathetic smile on her face every time you were there (which for us was quite often, especially during our younger daughter's first year)," Karen Vladeck shared on Twitter.

A makeshift memorial has been made in front of Children’s Medical Group in Central Austin, where Dr. Dodson worked, and where she had been killed. People have been coming throughout the day to place flowers and pay their respects to Dr. Dodson.

The memorial outside Children’s Medical started off with a few flowers before it turned into an overflow of flowers, notes, and signs from those who loved Dr. Dodson, including her patients. 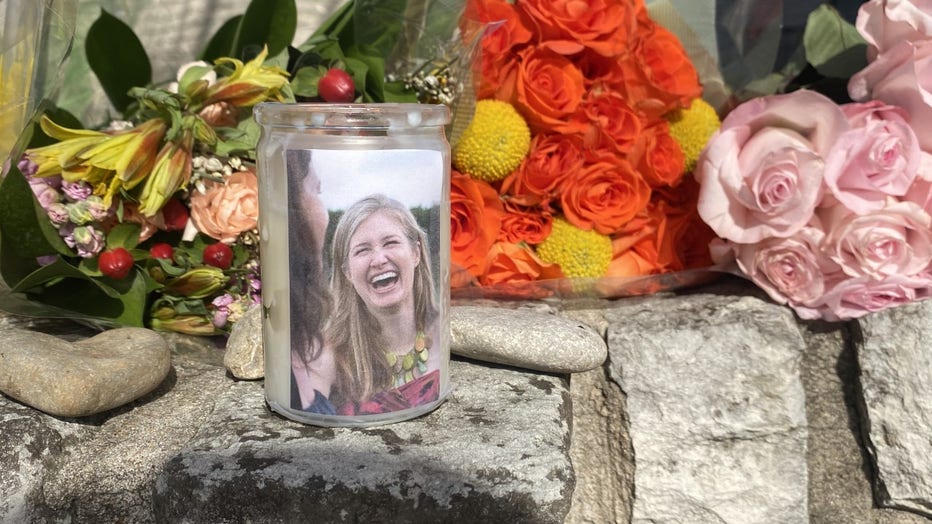 "I just wanted to show you know, my support," said Erica Hinojosa, who left flowers for Dr. Dodson, her sons' pediatrician. "I was shocked. I started crying and my boys asked me why I was crying. I told them, you know, and I don't know if they're too young to understand."

Hinojosa says this is a big loss.

"My son really, really trusted her and like, looked forward to like seeing her," said Leslie Chunta, whose son was also a patient. She says Dr. Dodson was her son’s favorite doctor. "He would get really excited about sharing his successes with her, and I think that that's something I'm really not looking forward to is sharing that he will not be able to share those successes with her directly."

Ruben Sifuentes says he and his 2-year-old daughter were at Dr. Dodson’s office the day she died. He says he saw her at around 10:30 am for his daughter’s check-up appointment and says he had no idea that would be the last time he saw Dr. Dodson.

"She was happy all the time. Every time she walked into a room and just lit up the room. She was excited to see our daughter. She was always laughing with us. She would tell us stories about her own family. Once again, it's just going to be a tragedy and it's just nothing we will ever, ever forget," said Sifuentes.

Pediatrician killed by other doctor remembered by family, patients

The community is in mourning after learning the pediatrician was killed in a hostage situation that lasted more than six hours.

Dr. Dodson, 43, was killed after she was reportedly taken hostage at her place of work by Dr. Bharat Narumanchi. Dr. Narumanchi shot himself after shooting Dr. Dodson, according to police.

Dr. Narumanchi, a pediatrician who was recently diagnosed with terminal cancer, had been to Dr. Dodson's office a week ago and applied for a volunteer position. Other than the previously mentioned visit to this office there did not appear to be any relation or other contact between Dr. Dodson and Dr. Narumanchi.

Hostage negotiators attempted to make contact with Dr. Narumanchi to no avail, according to police. After several attempts, it was decided to make entry into the building.

The Austin Police Department provides latest information regarding the investigation after two people were found dead at a Central Austin medical center.

Statement from the family of Dr. Lindley Dodson:

"We are beyond devastated at the tragic, sudden, and senseless loss of our beloved Lindley. As a dedicated mom, wife, daughter, friend, and pediatrician, she radiated light, love, and joy in everything she did and with everyone she touched. She developed an immediate rapport with her patients and had the unique ability to make you feel like the only person in the room. She brightened our lives and lifted us up with her laughter, which was like magic. We are all better because of her. Our only comfort is knowing she is now with Jesus and all the heavenly saints who are undoubtedly already looking forward to her first costume party. We are so grateful for the outpouring of love and concern but due to the ongoing nature of this investigation and our request for privacy during this awful time, we will have no further comment."

Yesterday evening we received the tragic news that one of our former Dell Children's hospitalists, Dr. Lindley Dodson, was killed last night. We are shocked and saddened by this news, and our thoughts and prayers are with Dr. Dodson’s family, friends and colleagues. Dr. Dodson worked for Dell Children's for over 10 years and remained on Medical Staff at Dell Children's when she left for private practice in 2017. Dr. Dodson was a hard-working and compassionate provider who will be greatly missed.