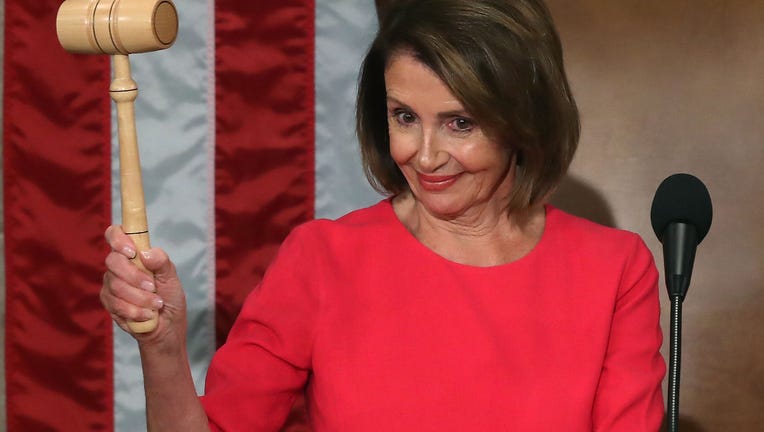 WASHINGTON, DC - JANUARY 03: Speaker of the House Rep. Nancy Pelosi (D-CA) holds the gavel during the first session of the 116th Congress at the U.S. Capitol January 3, 2019 in Washington, DC. Under the cloud of a partial federal government shutdown,

WASHINGTON - Nancy Pelosi promised as speaker she would "show the power of the gavel.”

This year, she laid it out for all to see.

The past week alone, the Democratic leader delivered a $1.4 trillion government funding package to stop a shutdown, pushed through the bipartisan U.S.-Mexico-Canada trade agreement, and passed her party's plan to lower prescription drug costs. In between, she led a congressional delegation to Europe for the 75th anniversary of the Battle of the Bulge.

And on Wednesday, she impeached the president.

As the first year of Pelosi’s second stint as speaker draws to a close - she is the only woman to hold the office, and the first speaker in 60 years to reclaim the gavel after losing it - the California Democrat took stock of whether she fulfilled her campaign trail promise.

“Donald Trump thinks so,“ Pelosi told The Associated Press during an interview Thursday at her office in the Capitol.

“If I did nothing else, he saw the power of the gavel there,” Pelosi told the AP. "And it wasn’t me, it was all of our members making their own decision.”

Not since an earlier era of leaders - like Sam Rayburn, whose name is on a building at the Capitol, or Newt Gingrich, who defined a political movement - has the House speaker wielded such influence.

“She has governed with force and authority,” said Julian Zelizer, a professor of history and public policy at Princeton.

Zelizer said Pelosi has accomplished with Trump what others have not, which is to build a coalition strong enough to hold the president accountable, through impeachment, while also muscling through big bills. This, on top of what she did during her first term in the office.

“She is likely to go down in history as one of the most effective Speakers,” he said.

Congress often runs toward a big year-end finish as lawmakers try to rack up accomplishments for the elections ahead. Lame-duck sessions, which this year is not, are often particularly robust as members capitalize on the narrow calendar window after the election but before the new Congress forms.

Former Speaker Paul Ryan delivered the GOP's sweeping tax cuts package in December 2017. Former Speaker John Boehner tried to secure the fiscal cliff deal of taxing and spending at the end of 2012, and it was eventually approved at New Year’s.

Pelosi’s earlier term as speaker, from 2007-2011, saw Democrats approve the signature achievement of the Obama era, the Affordable Care Act, during Christmas in 2009, though most of the action by that stage in the legislative process had moved in the Senate.

She regained the gavel in January of this year, emerging from a contentious internal party election, after sweeping House Democrats to the majority in the 2018 midterm elections.

Pelosi’s ability to steer the agenda is shaped in part by her decades in office. She immodestly calls herself a master legislator, but there's truth in the brag - she brings more legislative experience to her job than those immediate predecessors. Particularly during the start of Obama's first term, when her party controlled both chambers, she ushered health care, financial reform and other major items to passage in what historians say was the most productive session of Congress since Lyndon Johnson's Great Society years.

Critics contend Pelosi strong-armed bills through the House, resulting in 2010 Democratic midterm election losses that cost the party its majority and her the gavel.

Trump said Democrats are on a “suicide march” toward electoral defeat once again with impeachment.

“Crazy Nancy Pelosi’s House Democrats have branded themselves with an eternal mark of shame,” Trump told a rally crowd in battleground Michigan on the night he was being impeached.

The Republican leader of the Senate, Mitch McConnell of Kentucky, said Pelosi's House isn't accomplishing much because she is wasting time on impeachment.

But she notes that it's McConnell who calls himself the “grim reaper” in his Senate graveyard of House-passed bills he refuses to bring forward for a vote.

"The time is not up," Pelosi said Thursday, a reminder that all those pieces of legislation carry over to 2020, because Congress runs in two-year cycles and this session doesn't conclude for another year.

“As the election approaches, we would not want these to be election issues, we would like them to be accomplished legislation," she said. “So they either pass the bills or pay a price for not passing bills.”

The impeachment vote will be what history remembers most from this week. But passing the trade bill is a major win for both parties. And approving the government funding - Pelosi was negotiating the package in calls with Treasury Secretary Steven Mnuchin during her weekend diplomacy paying tribute to World War II veterans in Europe - counts too. Last year at this time, the government was heading toward what would become the nation's longest-ever federal shutdown.