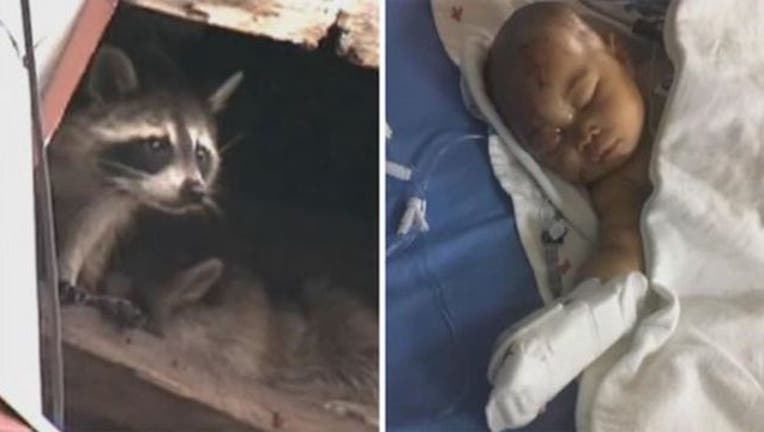 (FoxNews.com) - A four-month-old infant who was viciously mauled and dragged by a raccoon last week in a Philadelphia apartment will get a new “safe and secure” home to live in after she leaves the hospital — thanks to an outpouring of donations, the baby’s uncle said.

Journi Black was sleeping in her bed last Wednesday when a raccoon managed to get into the home, drag the infant out of bed and attack her. Journi’s uncle, Kenneth McDuffie, told Philly.com on Christmas Eve that the overwhelming amount of donations to the infant’s GoFundMe page during Christmastime ensured the family could get a safe and secure home to prevent another incident.

“It will be safe. It will be secure. It will be wildlife- and rodent-free, a place where they are comfortable and they are safe,” McDuffie told Philly.com. “We can’t always predict what is going to happen in the future, but we want to make sure that [Rodgers] and her family are safe.”

The GoFundMe page raised more than $16,000 within three days, with the goal initially set to $2,000. More than 520 people have contributed to the fundraiser as of Monday afternoon. Journi’s mother, Ashley Rodgers, reportedly said that she was overwhelmed by the support and that people have dropped off gifts for her daughter to help the family celebrate Christmas.

She also posted a Christmas update on the GoFundMe page with the caption: “Merry Christmas! Thank you all for outpouring of love & support. Baby Journi is enjoying all the gift s You all really know how to make a girl feel special. Peace & Blessings to you and your family on this glorious day!”

Journi is still in the hospital recovering from her injuries as of Monday. It's still unclear when she will be released.

Rodgers told FOX29 Philadelphia earlier that she had just left the bed Wednesday night to take her 6-year-old son, Jordan, to the bathroom when the mauling happened.

"She was laying on the floor — across the room — blood all over her face and her PJs," Rodgers said.

The baby was rushed to the hospital where she received 65 stitches in her face. Doctors said the baby’s recovery could take up to a year.

Rodgers moved her children to the one-room apartment a few days before the vicious attack. Tenants in the building have previously complained about a raccoon infestation. Rodgers said the apartment, which cost $375 a month for rent, was all she could afford for her family.

“It needs to be shut down. Everybody needs to leave out of there,” Rodgers said.

“It is [the landlord’s] responsibility. There’s no reason an animal should have gotten into the house with minors,” Samuel Black, the girl’s father, said.