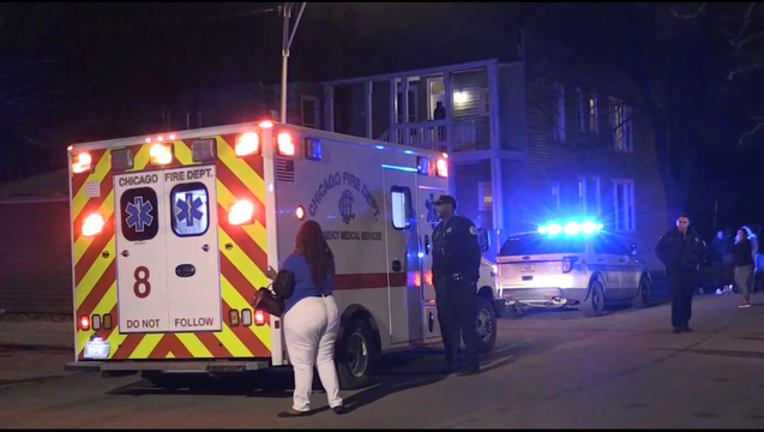 SUN-TIMES MEDIA WIRE - Two people were killed and at least 16 others were wounded in shootings across the city between Friday afternoon and Monday morning.

One man was killed and another wounded in an Englewood neighborhood shooting Saturday night on the South Side. Ishmael Jackson, 23, was standing in the backyard of a home with a 27-year-old man at 10:44 p.m. in the 5600 block of South Elizabeth when another male opened fire, according to Chicago Police and the Cook County medical examiner’s office. Jackson was shot in the back and taken to Stroger Hospital, where he was pronounced dead at 11:51 p.m. He lived in south suburban Robbins. The 27-year-old suffered a gunshot wound to the “face area,” and was also taken to Stroger Hospital, where his condition was stabilized.

The weekend’s first shooting left a 17-year-old boy dead in the Marquette Park neighborhood on the Southwest Side. Titus Jackson was discovered unresponsive with gunshot wounds to his chest, leg and buttocks at 6:23 p.m. Friday in the 7100 block of South Washtenaw, according to authorities. Jackson, who lived in the Lawndale neighborhood, was pronounced dead at the scene at 6:36 p.m.

The latest nonfatal shooting happened about 12:50 a.m. Monday in the Avondale neighborhood. Two men were walking in the 2200 block of West Diversey when another male walked up and fired shots, police said. A 29-year-old man suffered gunshot wounds to the right leg and buttocks, while a 33-year-old man was shot in the left leg. They were taken to Illinois Masonic Medical Center, where both of their conditions were stabilized.

Minutes earlier, a 20-year-old man was wounded in another drive-by shooting about half a mile away. He was outside about 5:30 p.m. in the 300 block of North St. Louis when a vehicle pulled up and someone inside fired shots. He suffered a gunshot wound to the leg and took himself to Mount Sinai Hospital, where he was treated and released.

About 11 a.m. Sunday, a 19-year-old man heard gunfire and felt pain in the 3600 block of West Sunnyside in the Albany Park neighborhood on the Northwest Side, police said. He was shot in the chest and taken in critical condition to Illinois Masonic Medical Center. A suspect was in custody and charges were pending.

Earlier Sunday, a woman was shot in the Ravenswood neighborhood on the Northwest Side. The 35-year-old was walking about 2 a.m. in the 4700 block of North Virginia when she heard gunfire and realized she’d been shot in the right thigh, police said. Her condition was stabilized at Swedish Covenant Hospital.

At 9:21 p.m. Saturday, a 21-year-old man was a passenger in a vehicle in the 5900 block of South Sangamon in the South Side Englewood neighborhood when shots were fired and he was struck in the left leg and the right side of his face, police said. The driver took him to St. Bernard Hospital, and the man was later transferred in serious condition to Stroger Hospital.

Less than an hour earlier, a 16-year-old girl was grazed by a bullet in an Austin neighborhood shooting on the West Side. She was walking on the sidewalk with a group of people about 9:05 p.m. in the 300 block of South Cicero when someone fired shots from a black car, police said. The girl was taken to West Suburban Medical Center in Oak Park with a graze wound to her buttocks. Her condition was stabilized.

At 5:04 p.m., an 18-year-old man was shot in the chest in a backyard in the 7200 block of South Paulina in the West Englewood neighborhood on the South Side, police said. He was able to run from the shooting and was eventually picked up by paramedics and taken to Christ Medical Center in Oak Lawn, where his condition was stabilized.

About that same time, a 16-year-old boy was shot in the right hand in the 7200 block of South Talman in Marquette Park, police said. He later showed up at Holy Cross Hospital, where he was treated and released.

Detectives were investigating whether those two shootings — the West Englewood and Marquette Park incidents — were related.

Two men were wounded in a shooting about 3 p.m. Saturday in the South Shore neighborhood. They were in the 2500 block of East 79th Street when they were approached by at least one person who shot at them, police said. A 23-year-old man was shot in the leg and taken to Christ Medical Center, while a 33-year-old was shot in the arm and taken to South Shore Hospital, but was later transferred to Stroger Hospital. They were both listed in serious condition.

The weekend’s first nonfatal shooting happened shortly after 11 p.m. Friday in the Humboldt Park neighborhood on the West Side. An 18-year-old woman was standing outside in the 1300 block of North Rockwell when a black SUV with several females inside pulled up, and at least one of them opened fire, police said. The woman was shot in the leg and taken to Stroger Hospital in serious condition.

Last weekend, five men were killed and 15 other people were wounded in citywide shootings. More than 600 people have been shot in Chicago so far in 2017.