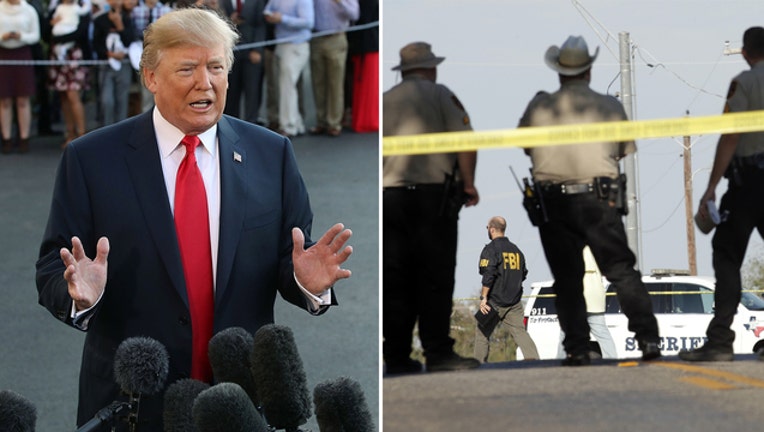 TOKYO - (AP) — Responding to a U.S. mass shooting for the second time in six weeks, President Donald Trump said Monday that it wasn't "a guns situation" that was behind the slayings of more than two dozen worshippers at a Texas church a day earlier.

As he did following last month's Las Vegas massacre of 58 people, Trump resisted any discussion of gun control during a news conference in Tokyo, where he was beginning his first presidential trip to Asia.

Instead, Trump characterized the shooting as a "mental health problem at the highest level." Yet White House officials said Trump is unlikely to call for a specific policy response, as he did after last week's Islamic State group-inspired truck attack, which killed eight people in New York City.

"This was a very — based on preliminary reports — a very deranged individual. A lot of problems over a long period of time," Trump said when asked about the shooting as he and Japanese Prime Minister Shinzo Abe held a joint news conference.

Within hours of a rental truck ramming through a crowded bicycle path and into a school bus, Trump called for Congress to "immediately" repeal the diversity visa lottery program that suspect Sayfullo Saipov, an Uzbekistan citizen, used to enter the country in 2010. Trump also claimed that the U.S. had already stepped up its retaliation against the Islamic State group after the attack.

"We are hitting them 10 times harder," he said Friday.

After the Las Vegas shooting, Trump and aides said it was inappropriate to consider a policy response while people were still grieving. Despite days later suggesting openness to outlawing the bump stock device that allowed Las Vegas shooter Stephen Paddock to fire at near-automatic rates, the Trump administration has shown no signs of urgency.

"He has asked that that process be reviewed, and we're waiting on some of the details of that to take place," White House Press Secretary Sarah Sanders said Oct. 27 when asked about bump stocks. "But a decision hasn't been finalized on that."

Trump, who supported gun control before reversing his position to enter the Republican presidential primary, courted the National Rifle Association's endorsement in 2016, and earlier this year became the first president in three decades to speak at the gun group's annual convention.

In February, Trump signed legislation reversing an Obama-era regulation that would have made it harder for Americans with mental illnesses to buy a gun.

The attack happened in South Texas on Sunday morning when a man dressed in black tactical-style gear and armed with an assault rifle opened fire inside a Baptist church in a small community, killing 26 people and wounding at least 16 others in the deadliest mass shooting in state history.

As Kelley left the scene, authorities said, he was confronted by an armed resident. Kelley later was found dead in his vehicle.

Trump said, "Fortunately somebody else had a gun that was shooting in the opposite direction, otherwise it (wouldn't) have been as bad as it was. It would have been much worse."