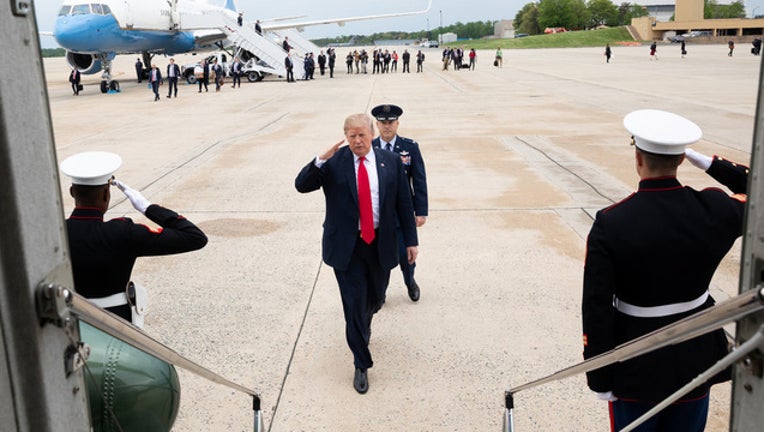 WASHINGTON - (AP) -- The Trump administration on Thursday proposed weakening Obama-era mileage standards designed to make cars more fuel efficient and less polluting, a major rollback already being challenged in the courts by California and other states.

The administration also served notice that it wants to revoke states' long-standing authority to set their own, stricter mileage standards.

Easing requirements that cars be more fuel efficient should make them both cheaper and safer, getting vehicles with the latest safety developments in the hands of consumers, officials said.

It's got "everything to do with just trying to turn over the fleet ... and get more clean and safe cars on the road," EPA assistant administrator Bill Wehrum said.

Transportation experts question the reasoning behind the proposal.

The proposal would freeze U.S. mileage standards at 2020 levels, when the new vehicle fleet will be required to hit an average of 30 miles per gallon in real-world driving.

California Gov. Jerry Brown on Thursday called the Trump administration proposals "an assault on the health of Americans everywhere. Under his reckless scheme, motorists will pay more at the pump, get worse gas mileage and breathe dirtier air. California will fight this stupidity in every conceivable way possible."

California and 16 other states filed suit over the fuel efficiency standards in May, anticipating the new regulation.

The Obama administration had planned to keep toughening fuel requirements through 2026, saying those and other regulations on vehicles would save 40,000 lives annually through cleaner air. The argument remained on the EPA's website Thursday.

According to Trump administration estimates, the Obama fuel efficiency standards would raise the price of vehicles by an average of $2,340. That would price many buyers out of the new-vehicle market, forcing them to drive older, less-safe vehicles that pollute more, the administration says.

Heidi King, deputy administrator of the National Highway Traffic Safety Administration, said the freeze would reduce highway deaths by 1,000 per year "by reducing these barriers that prevent consumers from getting into the newer, safer, cleaner, more fuel-efficient cars."

But private transportation experts say there are so many factors involved that the 1,000 lives saved figure is questionable. The affordability argument ignores thousands of dollars of saving in fuel costs for each driver over the life of a car, opponents of the rollbacks said.

While the administration supports freezing the mileage standards after 2020, it will seek public comment now on that proposal and a range of others, including leaving the tighter, Obama administration fuel standards in place.

President Donald Trump had directed the rethink of the mileage regulations, saying in March 2017, "If the standards threatened auto jobs, then common-sense changes" were needed. Auto jobs were not a major part of administration officials' case Thursday for the rollbacks.

California has had the authority under the half-century-old Clean Air Act to set its own mileage standards to combat its chronic smog problem.

More than a dozen states follow California's standards, amounting to about 40 percent of the country's new-vehicle market.

Automakers view the new proposal as a starting point for negotiations with California, with hopes of keeping one fuel efficiency standard for the entire nation.

It's costly for companies to design and build vehicles for California and states that follow its rules, and a different set for the rest of the country. Automakers have said they want improved efficiency but also want standards that account for the massive shift from cars to trucks and SUVs.

The Alliance of Automobile Manufacturers, a main industry group, said Thursday that the Trump proposal means it's time for negotiations to begin. "We urge California and the federal government to find a common sense solution that sets continued increases in vehicle efficiency standards while also meeting the needs of American drivers."

In 2012, when the standards were first adopted, cars were about 50 percent of new-vehicle sales. Now they're only about one-third, with less-efficient trucks and SUVS making up the rest.