It's a 2,500 pound blob, which is a plaster field jacket used to protect and transport dinosaur fossils from an excavation site in southern Missouri.

CHICAGO - In the basement of the Field Museum, where dinosaur fossils are stored and studied, the ancient bones just got some competition for attention because "the Beast" has arrived.

It's a 2,500 pound blob, which is a plaster field jacket used to protect and transport dinosaur fossils from an excavation site in southern Missouri.

"It's rare to find the dinosaur on this side of the continent. So that alone is like, extremely unique," explained Akiko Shinya, Field Museum, chief fossil preparator. 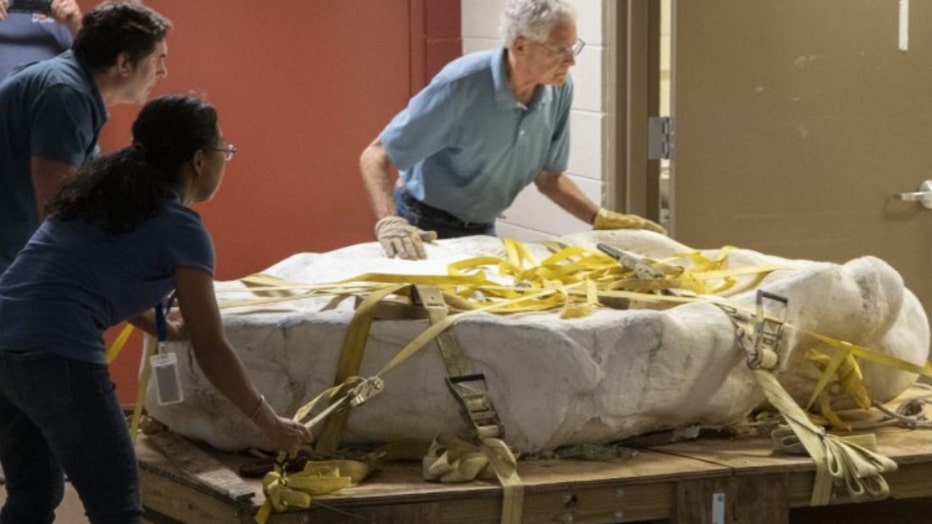 Scientists have already pulled fossils from the site of a duck-billed Dino called Parrosaurus Missouriensis. It's about 75 million years old.

"We had parts of the skull and then underneath there was a part of the arms, then underneath of that or continuing from that were more bones in the ground," Shinya said about the very productive site that Field Museum scientists started searching in 2017.

The latest discovery was so big the team started calling it "the Beast." It took an excavator to remove it from the Missouri dig, and then a big team to move it to Chicago.

Chicago's Field Museum has one of the largest collections of dinosaur bones on the planet! Jake Hamilton takes us underground to check it out.

One reason the field jacket full is so large is because scientists kept finding more fossils in the same area, meaning they had to expand their plaster cast. They believe the dinosaur's torso is inside, plus other life from its time including turtles and fish.

By the end of excavation and fossil preparation, they hope to have an almost complete duck-billed dinosaur that measures around 35 feet long.

It will likely take months to separate the fossils from "the Beast" and then several more years of searching for additional fossils in Missouri.