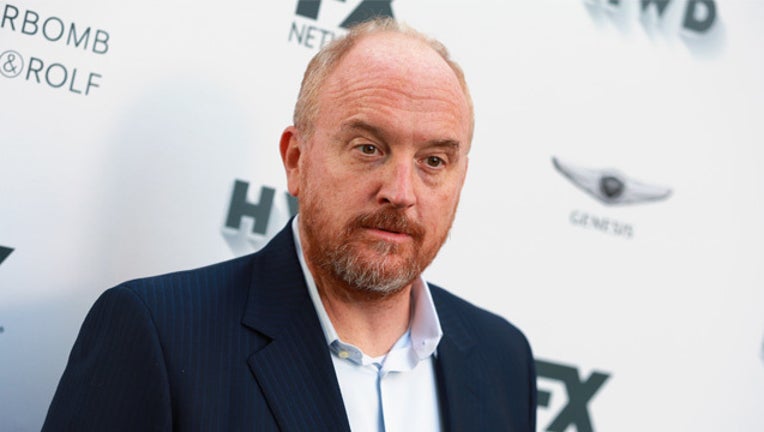 Comedians Dana Min Goodman, Abby Schachner, Julia Wolov, Rebecca Corry allege the Emmy-winning star of FX's "Louie" either pleasured himself in front of them, asked to do it or did so over the phone. A fifth woman detailed her allegations against C.K. to the paper but was not identified.

A lawyer for C.K. did not immediately respond to comment from The Associated Press, but a representative for the comedian said Thursday that C.K. would issue a written statement in the coming days.

In anticipation of the report, the New York premiere of Louis C.K.'s new film "I Love You, Daddy" was canceled on Thursday night and C.K.'s scheduled Friday appearance on "The Late Show With Stephen Colbert" also has been scrapped. The small distribution company handling the release of "I Love You Daddy" said it is reviewing the situation and giving careful consideration to the timing and release of the film.

HBO announced Thursday that C.K. would no longer be participating in "Night of Too Many Stars: America Unites for Autism Programs," set to air on the cable channel November 18. HBO also said it will remove C.K.'s past projects from its video on demand services.

C.K. is among the latest Hollywood figures to be accused of misconduct in a wave that began when dozens of sexual harassment allegations were reported last month against film mogul Harvey Weinstein.

He went on to become the head writer of "The Dana Carvey Show" from 1995-96 and contributed to the animated "TV Funhouse" vignettes on "Saturday Night Live."

He was a writer on "The Chris Rock Show" and voiced patients on the Comedy Central's "Dr. Katz, Professional Therapist." He also wrote and directed the film "Pootie Tang" with Rock, an infamous bomb.

In a 2014 episode of his FX series "Louie," the title character played by C.K. pushes himself on a longtime friend and sometime flame, Pamela. She's played by actress-writer Pamela Adlon of "Better Things."

In the scene, Pamela rebuffs his efforts to pull her into his bedroom as he paws at her. "This would be rape if you weren't so stupid. My God, you can't even rape well," she says.

C.K.'s comedy writing and production tentacles spread throughout TV and film. He's credited as a creator of the Zach Galifianakis show "Baskets," in its third season on FX, and of Adlon's "Better Things," now in its second season on FX. He is also developing another series for FX called "The Cops" in which he's set to star opposite Albert Brooks. C.K. is an executive producer of comedian Tig Notaro's Amazon series, "One Mississippi." He starred in a Netflix special earlier this year that was nominated for two Emmy Awards.

FX said in a statement Thursday it was "obviously very troubled by the allegations."

"The network has received no allegations of misconduct by Louis C.K. related to any of our 5 shows produced together over the past 8 years," the statement said, adding, "the matter is currently under review."

C.K. also appeared on several episodes of "Parks and Recreation" in 2012 and creator Mike Schur apologized Thursday for including him. On Twitter, Schur admitted to hearing rumors but still using the comedian. "I'm sorry," he wrote.

C.K.'s new film, "I Love You, Daddy," had its premiere this summer at the Toronto International Film Festival. C.K., who co-starred in Woody Allen's "Blue Jasmine," said he and co-writer Vernon Chatman wanted to make a movie about beloved artists who are trailed by murmurs of scandal.

Some also see the black-and-white 35mm film as C.K.'s response to his own controversies. Allegations of questionable sexual behavior long have dogged C.K.: Roseanne Barr has said there are "multiple accusations" and Notaro advised C.K. to "handle" the rumors.

In the film, C.K. plays a successful TV producer whose 17-year-old daughter begins a relationship with an older director. It spawns a kind of crisis for C.K.'s character, who has his own issues with how he treats women.

The allegations about C.K.'s behavior are the latest in Hollywood's growing sexual harassment scandal, which prompted Los Angeles County District Attorney Jackie Lacey to announce Thursday the establishment of a task force to handle any resulting criminal complaints.

The industry group Women in Film also announced Thursday that it plans to launch a "help line" and panel of pro-bono legal professionals to provide counseling, referrals and legal advice to harassment victims. The free service is expected to be available beginning Dec. 1.

- "Mad Men" creator Matthew Weiner was accused of sexual harassment by a former writer on the show. Kater Gordon told the website The Information in an article published Thursday that Weiner said she "owed it to him to let him see me naked" when they were working together one night. Weiner denied the allegations in a statement released by his publicist, saying, "He does not remember saying this comment nor does it reflect a comment he would say to any colleague."

- "Prison Break" star Robert Knepper denied allegations that he forced himself on a costume designer in 1992. Designer Susan Bertram told The Hollywood Reporter that Knepper sexually assaulted her while filming "Gas Food Lodging." She alleges he grabbed her and pushed her against a wall in his trailer. She says she managed to escape. Knepper responded to the allegations on Instagram, saying "I am shocked and devastated to be falsely accused of violence against a woman. That's just not who I am."

- Director Alfonso Arau dismissed Debra Messing's charge that he demeaned her on the set of her first film, "A Walk in the Clouds." The 85-year-old filmmaker said the "Will & Grace" star was "following fashion" with her accusation but that it had "nothing to do with reality." Messing said in February that Arau and producers had surprised her with a nude scene in the 1995 film that she hadn't agreed to in advance. When she complained, she says Arau told her, "Your job is to get naked and to say the lines. That's it."

Mark Kennedy is at http://twitter.com/KennedyTwits