WASHINGTON - Richard Barnett, 60, of Gravette, Arkansas, appeared in a photo taken last Wednesday inside the U.S. Capitol after a violent, pro-Trump mob stormed the building and ransacked lawmakers’ offices. In the photo, Barnett could be seen inside House Speaker Nancy' Pelosi's private office, draping his leg across her desk. By Tuesday, Barnett had made a different sort of appearance — in federal court.

Barnett appeared before U.S. Magistrate Judge Erin Wiedemann in Fayetteville on Tuesday to hear the charges against him. Among them is a charge that he unlawfully entered a restricted area with a lethal weapon — in this case, a stun gun.

Last week, Barnett was photographed sitting inside Pelosi’s office with one leg propped up, resting on her desk. After the break-in, Barnett told KFSM he was looking for the bathroom when he saw the door to Pelosi’s office was open.

"I sat down here in my desk. I’m a taxpayer. I’m a patriot. That ain’t her desk — we loaned her that desk," he reportedly said.

"And she ain’t appreciating the desk, so I thought I would sit down and appreciate the desk."

Last week, the United States Department of Justice said Barnett and more than a dozen others were charged in federal court for crimes committed during last Wednesday’s violent riot.

Barnett was arrested in Arkansas. He is also is charged with disorderly conduct and theft of public property. If convicted on all charges, including the new lethal weapon count, he could be sentenced to more than 11 years in federal prison. 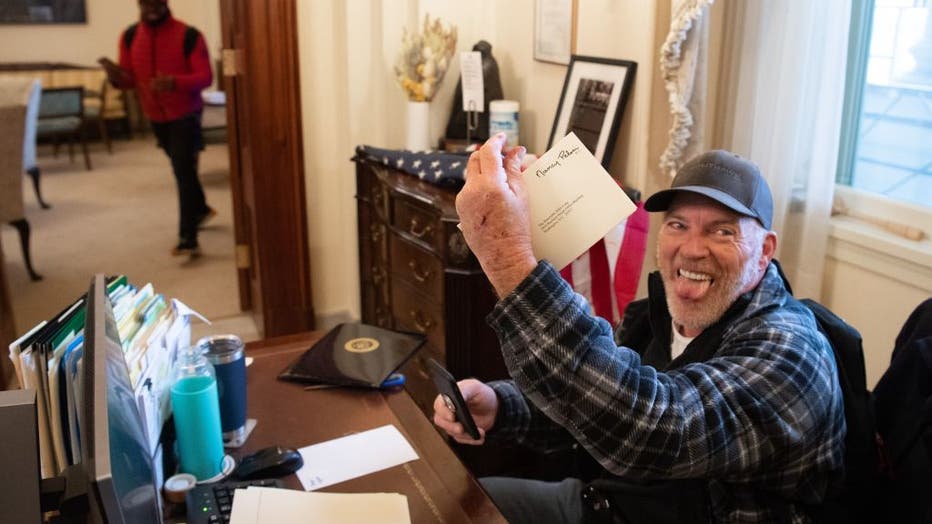 Richard Barnett, a supporter of US President Donald Trump, holds a piece of mail as he sits inside the office of US Speaker of the House Nancy Pelosi after protestors breached the US Capitol in the US Capitol in Washington, DC, January 6, 2021.

Barnett's attorney, Anthony Siano, conceded the validity of the warrant against him. Siano offered no further comment.

Barnett will remain in federal custody at the Washington County Detention Center in Fayetteville until a virtual detention hearing Friday, when a judge will decide whether to grant him bond.

Misdemeanor counts, including trespassing, against some of the dozens arrested so far may still be upgraded to sedition charges that are punishable by up to 20 years in prison, said acting U.S. Attorney Michael Sherwin in Washington Tuesday. Sedition charges would effectively accuse rioters of attempting to overthrow or defeat the government, with House Democrats saying after an FBI briefing on the siege that the rioters had engaged in an "attempted coup."

"This is only the beginning," Sherwin said of the initial round of charges against more than 70 people. "We're going to focus on the most significant charges as a deterrent because, regardless of it was just a trespass in the Capitol or if someone planted a pipe bomb, you will be charged and you will be found."

Even for those who have left Washington, "agents from our local field offices will be knocking on your door," said Steven D'Antuono, the assistant director in charge of the FBI's Washington field office in highlighting the nationwide effort to track down participants in the rioting.

The Justice Department has created a specialized strike force to examine the possibility of sedition charges. Officials said they were utilizing some of the same techniques in the riot probe as they use in international counterterrorism investigations, examining the money flow and movement of defendants leading up to the breach.

Senate Minority Leader Chuck Schumer, a New York Democrat, called for the rioters to be added to a no-fly list, a tool most commonly applied in foreign terror cases.