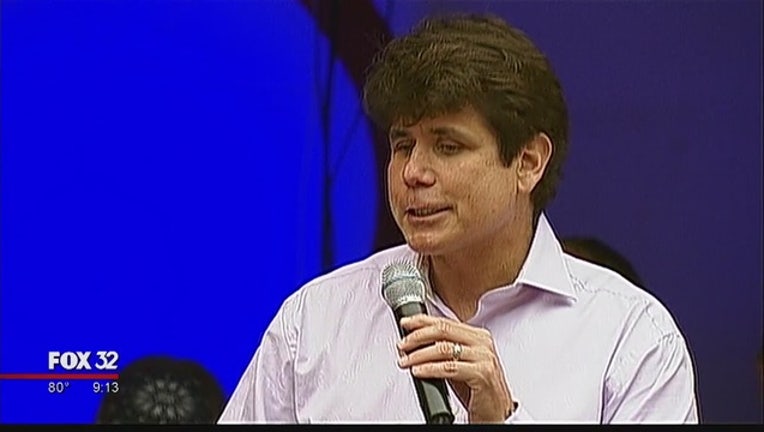 A 39-page filing by the Democrat's lawyers, posted by the high court on Friday, comes after multiple failed bids by the 60-year-old married father to have his convictions overturned or to reduce his 14-year prison term, which is the longest sentence imposed on an Illinois politician for corruption.

"It is all too easy to cast entirely lawful interactions as having an illegal subtext, particularly when jurors may find the reality of campaign fundraising distasteful or the defendant is politically unpopular," the filing, written by Chicago attorney Leonard Goodman, says.

Blagojevich, who once appeared on Donald Trump's "Celebrity Apprentice" TV show, is in his fifth year at a federal prison in Colorado. His convictions included trying to extort a children's hospital for contributions and seeking to trade an appointment to Barack Obama's vacated Senate seat for campaign cash.

The justices refused to take up a Blagojevich appeal last year and odds are they'll refuse again, including because many arguments in the new filing rehash arguments rejected previously. Each year, the Supreme Court receives up to 8,000 requests to hear appeals but ends up actually hearing only around 80.

One criterion it considers is whether a case broaches weighty legal issues about which lower courts disagree. Blagojevich's legal team argues this is one such case.

The new filing says that in three U.S. court circuits, including where Blagojevich was tried, jurors need only find there was an unspoken understanding that a politician would take some official action in exchange for campaign cash for it to qualify as bribery. Five other circuits, it says, require a clearly stated agreement to trade official action for cash.

The latter circuits, Blagojevich's attorneys contend, have it right.

In none of the alleged acts of corruption, the new filing says, did Blagojevich "explicitly demand campaign contributions ... in return for any official act."

A spokesman for Chicago's U.S. attorney's office, Joseph Fitzpatrick, declined comment. But in filings and hearings over the years, prosecutors have said repeatedly that Blagojevich's case stood out from other public corruption cases in how brazenly he sought to profit from his actions as governor.

Jeff Cramer, a former federal prosecutor who is now a Chicago-based managing director of investigations at Berkeley Research Group, agreed there was little reason to think the Supreme Court would change its mind and, this time, vote to hear Blagojevich's appeal. Cramer says Blagojevich's conviction "rests on far firmer grounds" than the convictions of many other politicians.

If the convictions aren't tossed, the filing also seeks another sentencing hearing for Blagojevich, who has already had two. It argues that Blagojevich's prison term far exceeds the terms of others convicted of similar conduct.

Last year, trial Judge James Zagel re-imposed Blagojevich's original 14-year sentence at a resentencing. The resentencing was ordered after the 7th U.S. Circuit Court of Appeals in 2015 threw out five of 18 convictions. The 7th Circuit judges said the evidence against Blagojevich on the 13 counts that remained was "overwhelming."