Yoán Moncada added a two-run double for the White Sox in their second straight win in the crosstown series at Wrigley Field. The AL Central leaders improved to 9-9 since the All-Star break.

Rodón and the White Sox bullpen combined for 17 strikeouts. David Bote got two of the five hits for the Cubs, who have dropped three straight and five of six.

Rodón (9-5) allowed just two hits to bounce back after losing consecutive starts for the first time this season. He was lifted after walking Rafael Ortega to lead off the sixth.

"If you watched the first hitter, it was time to go get him," White Sox manager Tony La Russa said of Rodón. "He gave us what he had. He was outstanding."

The All-Star lefty’s velocity was down in his last start at Kansas City on July 29, but topped out at 98 mph on Saturday after receiving extra rest between starts.

"It was nice to get a few more days," Rodón said. "The arm felt better today. It just worked out."

Michael Kopech came on to strike out the first batter he faced in the sixth, but Bote followed with a hit-and-run single to left to put runners on the corners. Kopech, though, escaped further damage by getting Patrick Wisdom to pop up and Frank Schwindel to ground out. 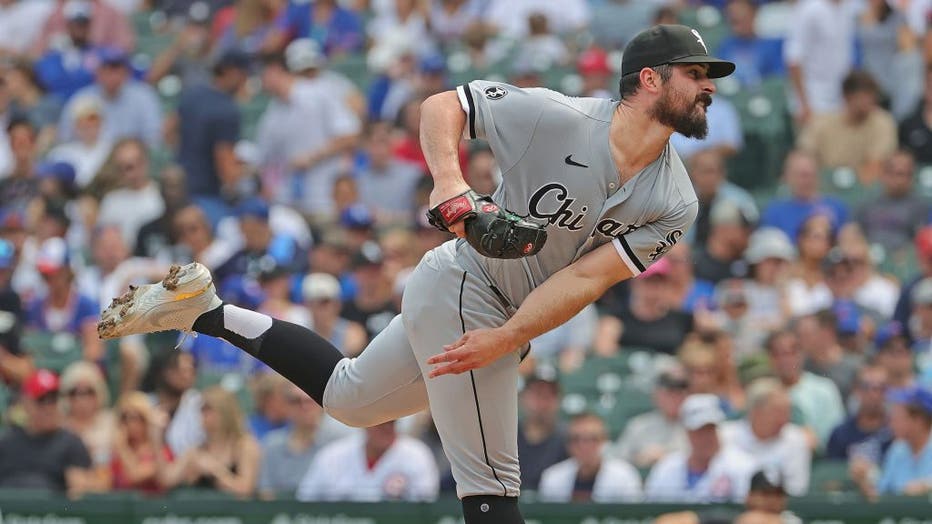 Starting pitcher Carlos Rodon #55 of the Chicago White Sox delivers the ball against the Chicago Cubs at Wrigley Field on August 07, 2021. (Photo by Jonathan Daniel/Getty Images)

Aaron Bummer, Craig Kimbrel and Ryan Tepera each worked a scoreless inning. Kimbrel, acquired like Tepera recently from the Cubs, bounced back from a rare rough outing Friday.

Cubs starter Adbert Alzolay (4-12) dropped his eighth straight decision and hasn’t won since beating San Diego on June 2. He pitched well and allowed two runs on six hits in 6 2/3 innings, striking out seven and walking none. Alzolay entered with a 6.25 ERA in the nine starts during the winless streak.

The White Sox jumped out to 2-0 lead in the first when Moncada stroked a two-out double off the center-field wall to score Hernandez and Eloy Jiménez, who each reached on infield singles.

Hernandez and Abreu added insurance in the eighth with homers off reliever Trevor Megill to make it 4-0.

Despite the teams heading in opposite directions — the White Sox apparently to the postseason for a second straight year and the Cubs beginning a rebuild — the players believe there’s still a spark to the crosstown rivalry.

"The energy in the stadium, you can feel it," Rodón said. "The fans were into it today and they were into it (on Friday."

White Sox: CF Luis Robert (right hip flexor tear) was scheduled to play a full nine innings on Saturday for Triple-A Charlotte and could be activated sometime during the next series at Minnesota. "I hear he hit a bomb a thousand feet the other day," La Russa said. "So all indications are that he’ll be with us soon." ... C Yasmani Grandal (torn left knee tendon) did some baserunning before the game. The team is discussing when the veteran will be ready to go on a rehab assignment.

Cubs: RHP Rowan Wick (left oblique strain) struck out three in a clean inning on Friday in his fourth appearance for Triple-A Iowa during his rehab assignment.