Since the beginning of the pandemic, Governor Tony Evers and his top state health advisors have repeated the mantra, “We’re going to listen to the science.” But the administration’s current guidance on face masks for teachers has one scientist scratching his head.

WHITEFISH BAY - The Wisconsin Department of Health Services says teachers should not wear N95 respirators to school this fall, but a scientist at Duke University says that advice makes “no sense.” And at least one local school district will not allow staff members to wear N95 masks brought from home.

“I’m mad. I’m scared,” said a woman we will refer to as Angela, a teacher in the Whitefish Bay School District who asked that we not use her real name. Angela said the thought of spending long days in an old school building around a classroom full of students in the midst of a pandemic is worrisome enough. 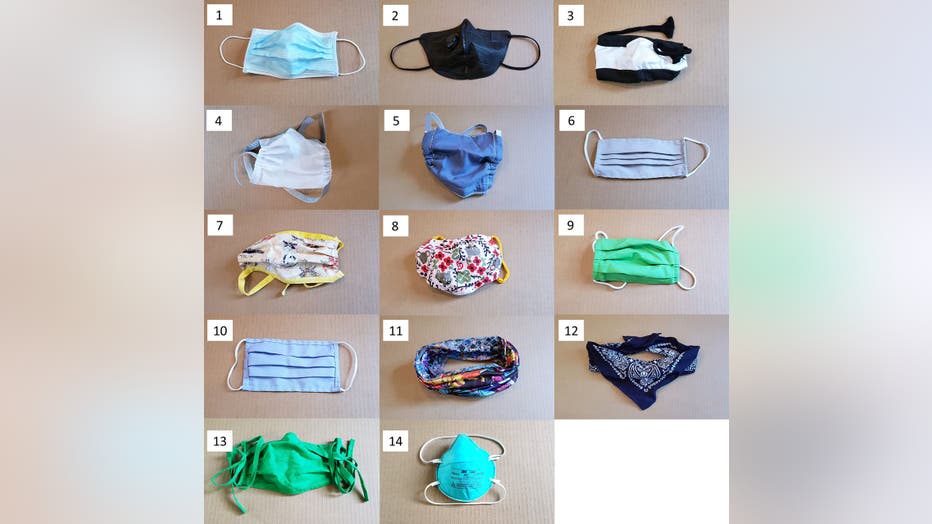 “Can I even work? Can I go back to work? Do I quit my job,” she recalled wondering aloud. That was before she saw the district’s policy on face masks.

"I think a lot of people are scared and just confused about why,” she said.

Since the beginning of the pandemic, Governor Tony Evers and his top state health advisors have repeated the mantra, “We’re going to listen to the science.” But the administration’s current guidance on face masks for teachers has one scientist scratching his head. 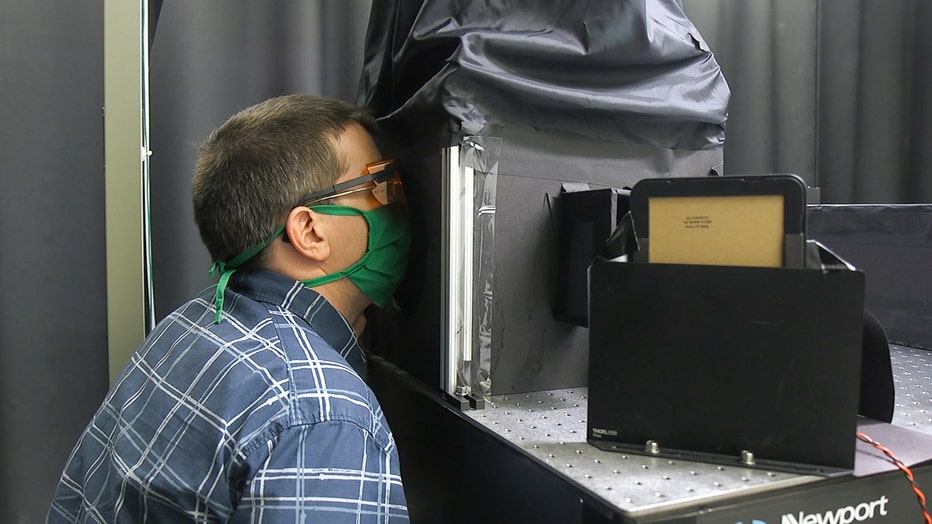 “It doesn’t make any sense to me,” said Dr. Eric Westman, one of a team of researchers who devised an experiment to answer an important question facing millions of Americans this year: “How good is the mask you’re wearing?”

The Duke researchers shined a laser beam through a sealed, black box, with an opening on one end for a test operator to speak into -- first, without a mask -- and then, with one. They used a smartphone to record breath particles as they passed through the scattered beam of light, then used computer algorithms to count the particles.

“You actually do express particulate matter or droplets when you speak,” Dr. Westman said. 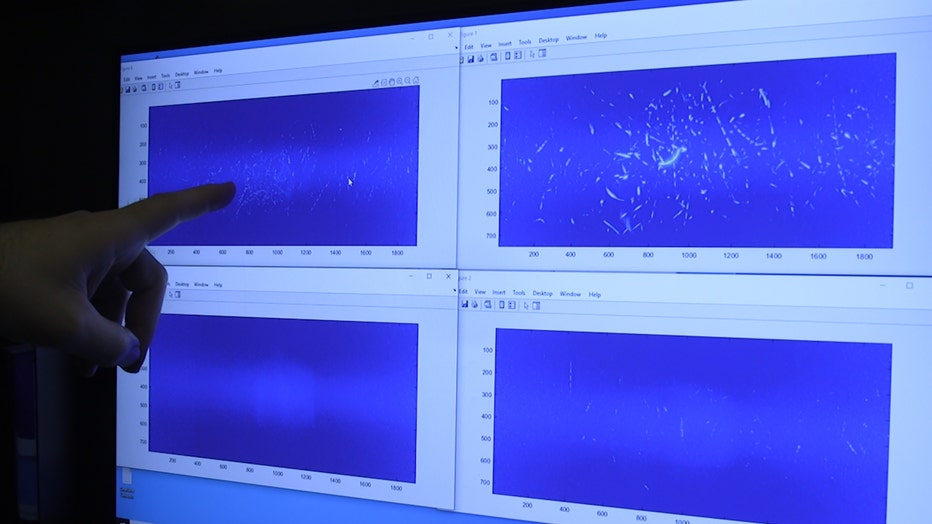 Dr. Martin Fischer, Ph.D. developed a simple, low-cost technique to visualize the effect of face masks on droplet emissions during normal wear. Illuminated through a sheet of laser light, droplets from speaking with no mask are seen on the top right

They repeated the experiment with 14 different masks, but one result got the most attention. The mask labeled #11, a single-layer fleece neck gaiter, actually registered more breath particles than wearing no mask at all. The researchers suspect the fleece broke down larger particles into smaller particles, increasing the number, rather than blocking them from spreading.

“We didn’t anticipate that some would be bad,” Dr. Westman said. 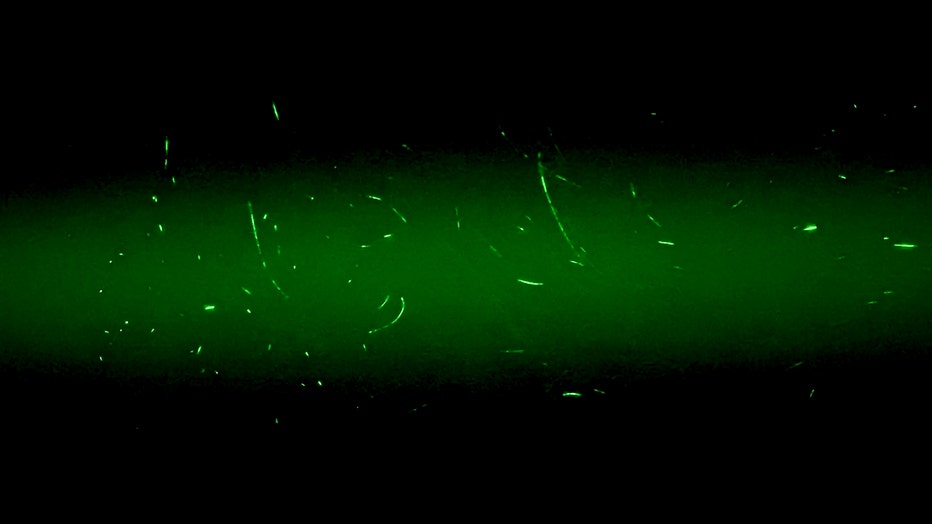 Dr. Martin Fischer, Ph.D. developed a simple, low-cost technique to visualize the effect of face masks on droplet emissions during normal wear. Seen here are droplets from speaking without a mask which are being illuminated through a sheet of laser l

While the poor performance of the neck gaiter grabbed headlines, Dr. Westman said most of the other masks performed reasonably well. The best was hardly a surprise --the N95 respirator.

"I would want someone to wear the best mask that they have, scientifically speaking,” Dr. Westman said. 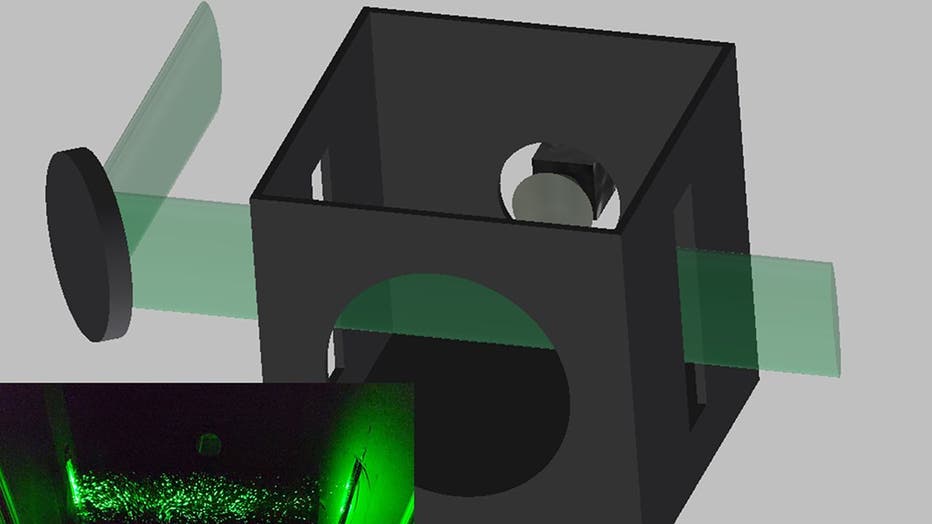 Like many other school districts around the state, Whitefish Bay settled on a hybrid model of instruction for the fall, with two cohorts of students each attending part-time in person and part-time online. The reduced class size allows them to spread desks apart to maintain a safe social distance. In addition, the district will require both staff and students to wear face coverings. What caught some teachers off guard was the district’s decision to ban the use of N95 masks, even on a voluntary basis.

“It’s one thing to say N95 masks won't be provided,” Angela said. "But the next level is when it said they’re prohibited.”

“It makes no sense to me to tell someone you can’t wear one,” Dr. Westman said. "Because it is better protection.”

When the FOX6 Investigators asked Whitefish Bay schools to explain the N95 ban, they did not provide an answer. Instead, the district’s director of buildings and grounds sent the same memo we had already seen – the one that bans the use of N95 masks.

The Wisconsin Department of Public Instruction offered nothing more, writing that it has “no specific guidance on what types of masks” should or should not be worn in schools. 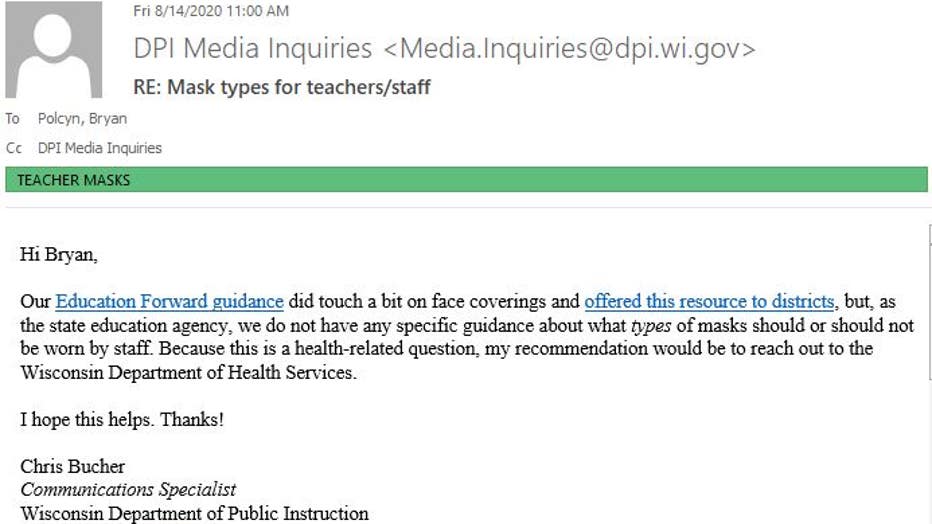 The Wisconsin Education Association Council -- the state teachers' union -- had little to say on the matter, instead writing that schools “should not be open” at all until certain COVID-19 benchmarks are met. 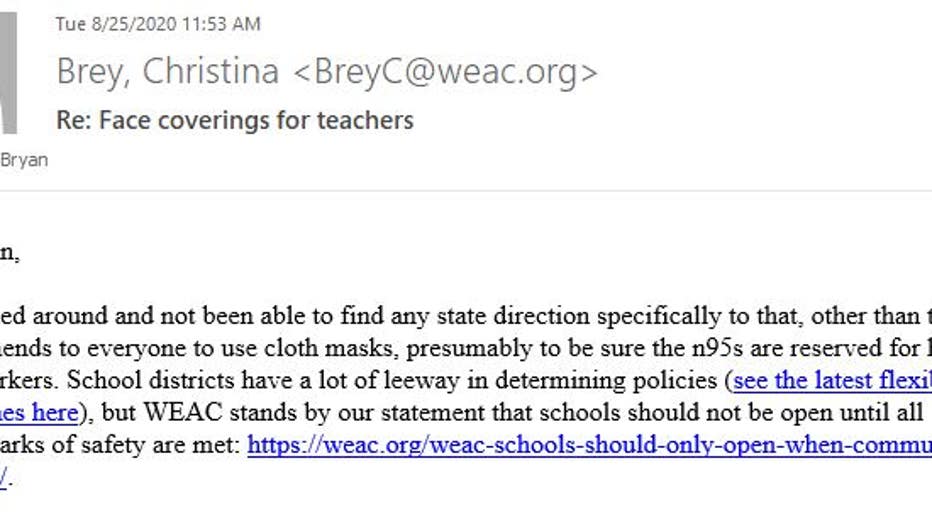 The only guidance we could find on masks for teachers comes from the Wisconsin Department of Health Services.

“We would recommend people continue to wear their cloth face coverings,” said Traci DeSalvo, director of communicable diseases for DHS. “N95 respirators really work best in a health care setting where someone is available to be fit tested and so are not necessarily the best thing to be using in a school setting.”

“But the material still gives very excellent protection if it’s making a good seal without the fit testing,” he said.

The Duke physician says restrictions on the use of N95s should be limited to areas of the country that have an ongoing shortage of personal protective equipment, or PPE. 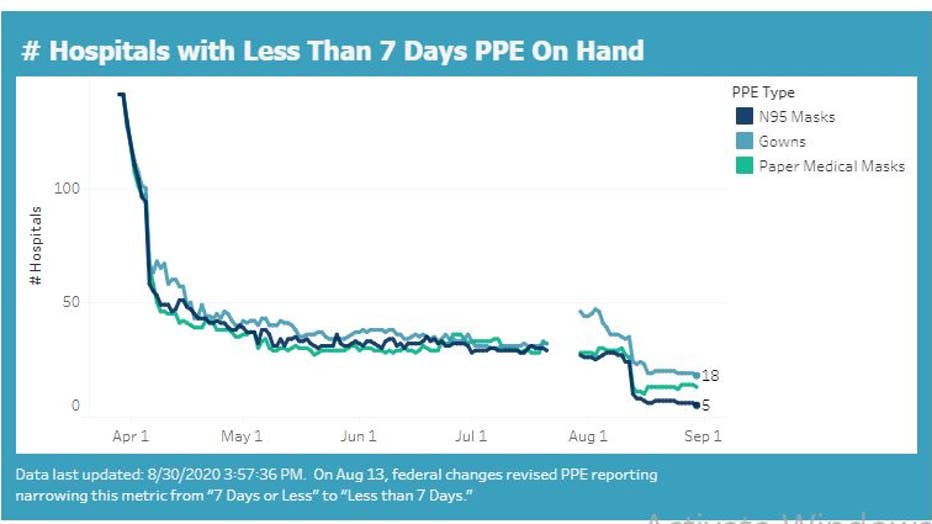 In Wisconsin, data tracked by the Wisconsin Hospitals Association finds concerns over a shortage of PPE are at their lowest levels since the pandemic began. Just 5 out of 133 hospitals report having less than a week’s supply on hand. And even those 5 likely have access to more if demand would ramp back up.

“I want to protect myself as best as I can so I can protect my loved ones,” Angela said.

She has access to her own supply of N95 respirators and wants to be able to wear them as she and her colleagues head back out onto the front lines of the pandemic.

“It makes me frustrated that people aren’t taking the risks that teachers are going to be exposed to seriously,” she said.

She hopes speaking out won’t be a waste of breath.